A few short years ago, predictions about the next major style influencer would probably not have pertained to Katie Holmes. It’s not that the actress didn’t wear decent ensembles, but perhaps Holmes was just less prolific in her public outings.

At the time she was in an extremely private relationship with actor Jamie Foxx, which kept her out of the spotlight to a certain extent. When the couple split in 2019, Holmes began stepping out in a who’s who of cool New York-based designers – including that Khaite cashmere bra-digan.

Since then we’ve sat up and taken notice of Holmes’ previously unsung street-style. Her baggy jeans? We bought ’em. The Insta-famous sandals she copped? Yep, we followed suit. So why didn’t we recognise her burgeoning boot collection?

Let’s start with her current favourites, Frame’s best-selling Le Canon Boot. The all-weather pair are perfect for tracking through the New York snow thanks to their durable leather and thick rubber sole. Holmes has been spotted out in hers on a number of occasions and thanks to the classic knee-high cut, it’s a super-wearable style that will work with most outfits.

Then we have Holmes’ love affair with her Alexander McQueen’s lug-soled Tread Chelsea Boot, which she’s worn with a Wardrobe.NYC coat and tracksuit pants during a casual outing, or dressed up with the same coat and red tartan pants to celebrate her birthday with boyfriend Emilio Vitolo.

On yet another day-date with Vitolo, Holmes again chose to wear her go-to coat with a pair of boots – this time she opted for Dorateymur’s Stainless Ankle Boots, which up the ante on any ensemble thanks to their pointed toe and sculptural heel. Holmes chose to show them off by unzipping her jeans to the ankle and honestly, we would too.

That brings us to Holmes’ Sorel Lenox Hiker Boots, a brand that also happens to be favoured by none other than Oprah Winfrey. On colder days, you’ll find Holmes braving the chill in these super-warm lace-ups, which do double duty as both comfortable and weather-appropriate, without sacrificing style. Sold! 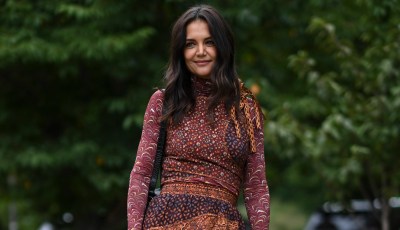