She wore the same dress on Jimmy Fallon and to a friend’s wedding in Italy, but with one significant hairstyle shift

Despite flagging herself as Hollywood’s’ normal girl, Jennifer Lawrence pretty much wins at life right now. She’s won an Oscar, has stolen scenes in countless hit films (including current blockbuster winner, X-Men: Apocalypse and and the highly anticipated sci-fi drama, Passengers, out later this year) and is one half of our ultimate #friendshipgoal pairing with Amy Schumer.

Sorry JLaw, you’re not like a regular celebrity, you’re a cool celebrity.

Still, in her bid to maintain normal-girl status, Lawrence did the most normal-girl thing ever – she repeated an outfit.

Attending a friend’s wedding in Tuscany on June 3rd, Lawrence donned the same slip-dress-and-bow-choker ensemble that she sported on her The Tonight Show with Jimmy Fallon appearance on May 24th. Aside from switching out her Christian Louboutin stilettos for a more tan wedge more equipped to take on the Italian countryside, Lawrence’s double-take efforts were further amplified by her beauty looks on both occasions.

Instead of wearing her famous platinum blonde bob down and tousled as she did on Fallon’s New York stage, she pinned it up into a Spring wedding-ready low bun.

And while she trusted her classic black-lined eye combo for both occasions, Lawrence went for more AM-appropriate neutral shadows for her friend’s wedding rather than the lilac and silver smoky combination from her earlier TV appearance.

Proving that beauty significantly impacts the direction of an outfit, next time you’re opting to repeat an ensemble at an event, take a cue from Lawrence.

Update your hair to the feminine side by choosing an etherial bun or a sleek high ponytail for an instantly modern edge, meanwhile toning your make-up up or down, or simply shifting the shades can help you instantly hit refresh on any look. 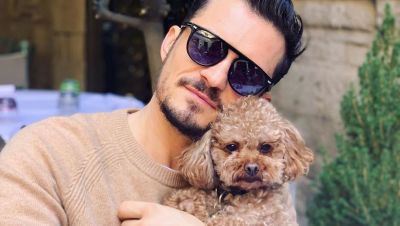 In Heart-Warming News, Orlando Bloom Can’t Wait To Be A “Girl Dad”