Hailey Bieber is a constant source of beauty inspiration in the GRAZIA office, but her latest look for the LACMA Art + Film Gala has become an obsession. While the model occasionally experiments with unexpected makeup looks, she tends to follow something a formula that tends to consist of golden, luminous skin, a bronze smokey eye and a muted lip.

But the star’s look for the LACMA red carpet was a stark departure from her typical beauty repertoire, with a deep berry lip and soft, pink-hued glitter eye makeup. While Bieber wore a similar shimmering eye look in a lilac shade to the MTV Video Music Awards a few months back, she pared back the rest of her makeup by opting for a glossy nude lip.

The wine-coloured lipstick shade she chose for her LACMA appearance marks the first time we’ve seen the star sport a dark lip colour in recent years. Worn with the pretty pink glitter eyeshadow, it’s a statement-making beauty look that taps in to the moodier lipstick hues that are beginning to dominate both the runway and the red carpet.

And honestly? I can’t stop thinking about this look. The subtle shine that makeup artist Mary Phillips patted across Bieber’s lids acts as an artful adversary to the ruminative berry-red lip, bringing an element of ethereal vigour to what could otherwise be a relatively sedate choice.

While Phillips has remained tight-lipped about exactly which products were used to create Bieber’s burgundy pout and glitter eye, makeup artist Hannah Martin attempted to recreate Bieber’s look in a video on her Instagram page.

She used a series of rose and shimmer shades from Ciaté London’s I Am Woman palette ($64) to mimic Bieber’s sparkling eyeshadow, with the Armani Beauty Smooth Silk Lip Pencil in 11 ($47) and the MAC Cosmetics Hypnotizing Holiday lipstick in Magic Charmer ($33) emulating the bruised berry lip shade. 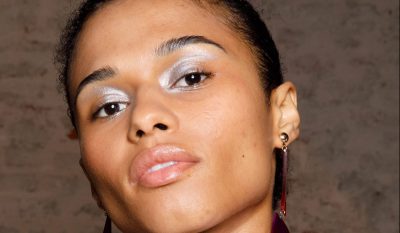