Canggu’s newest hotspot has fine fish dining in its bones

The focus falls squarely on sustainably caught seafood at Fishbone Local, Bali's next dining destination for locals and the cocktail crowd alike 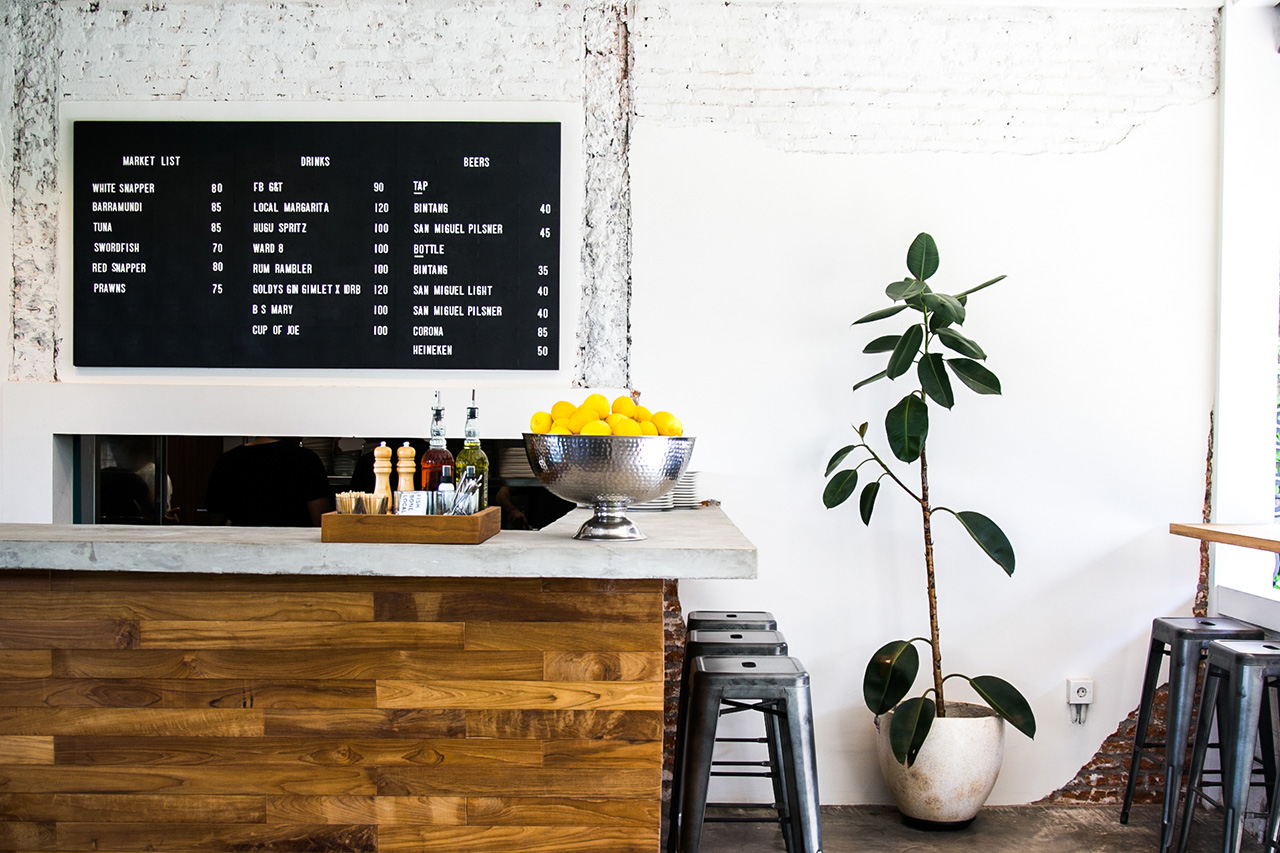 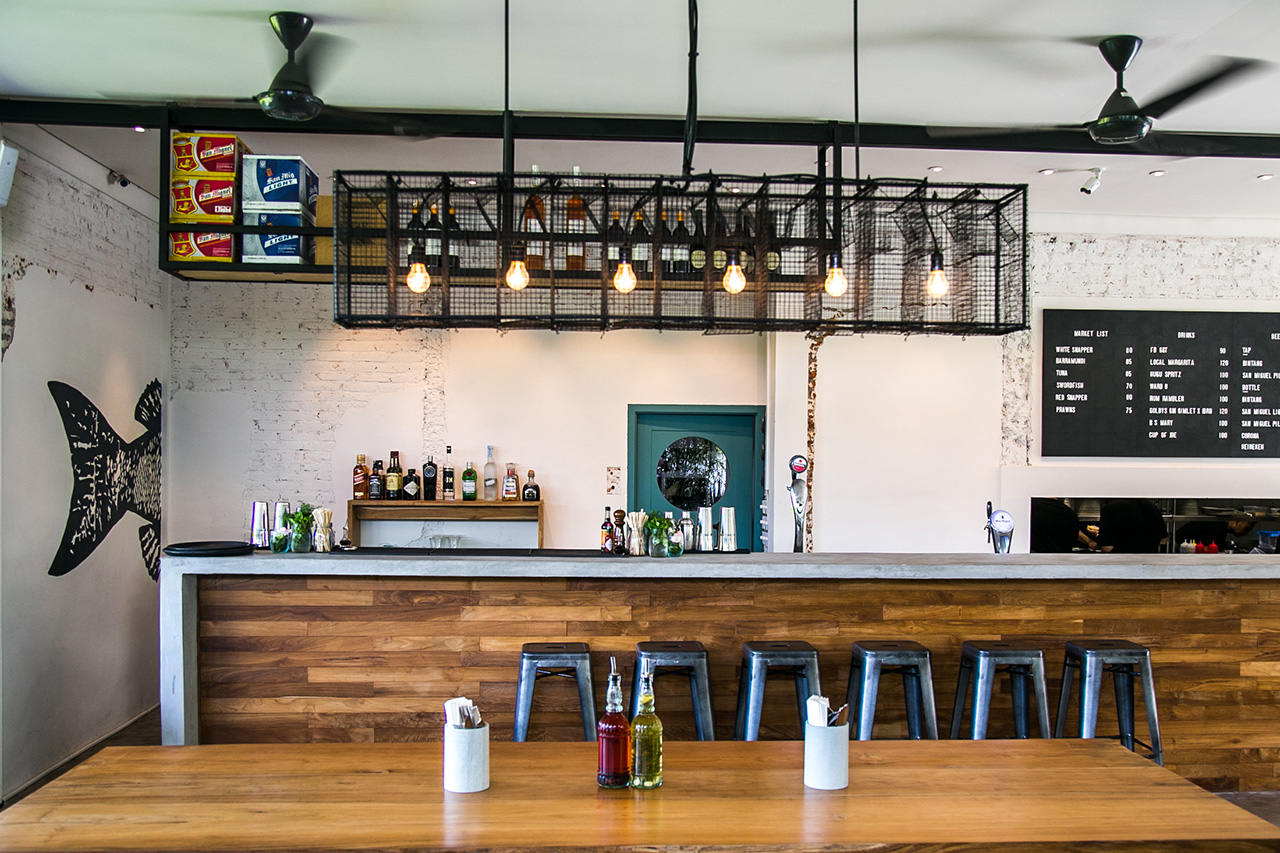 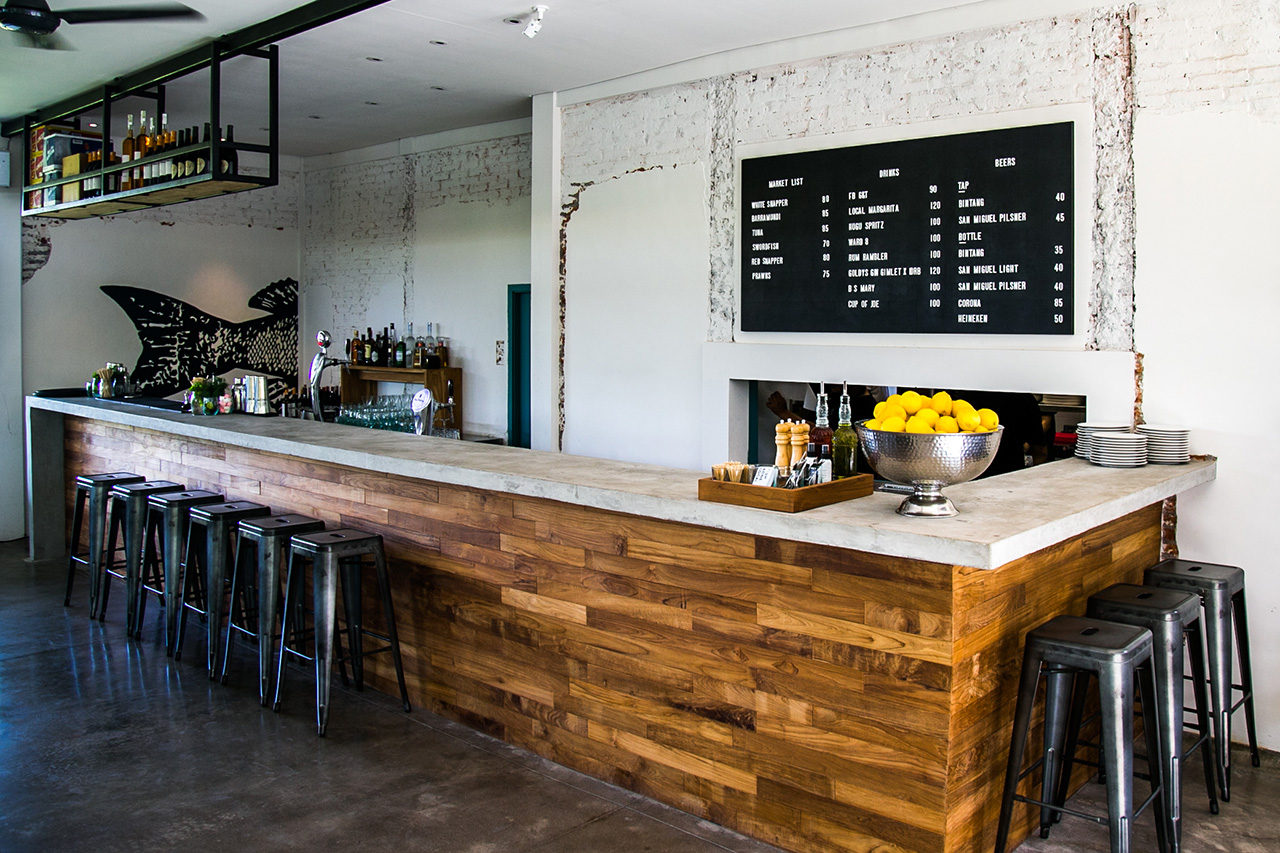 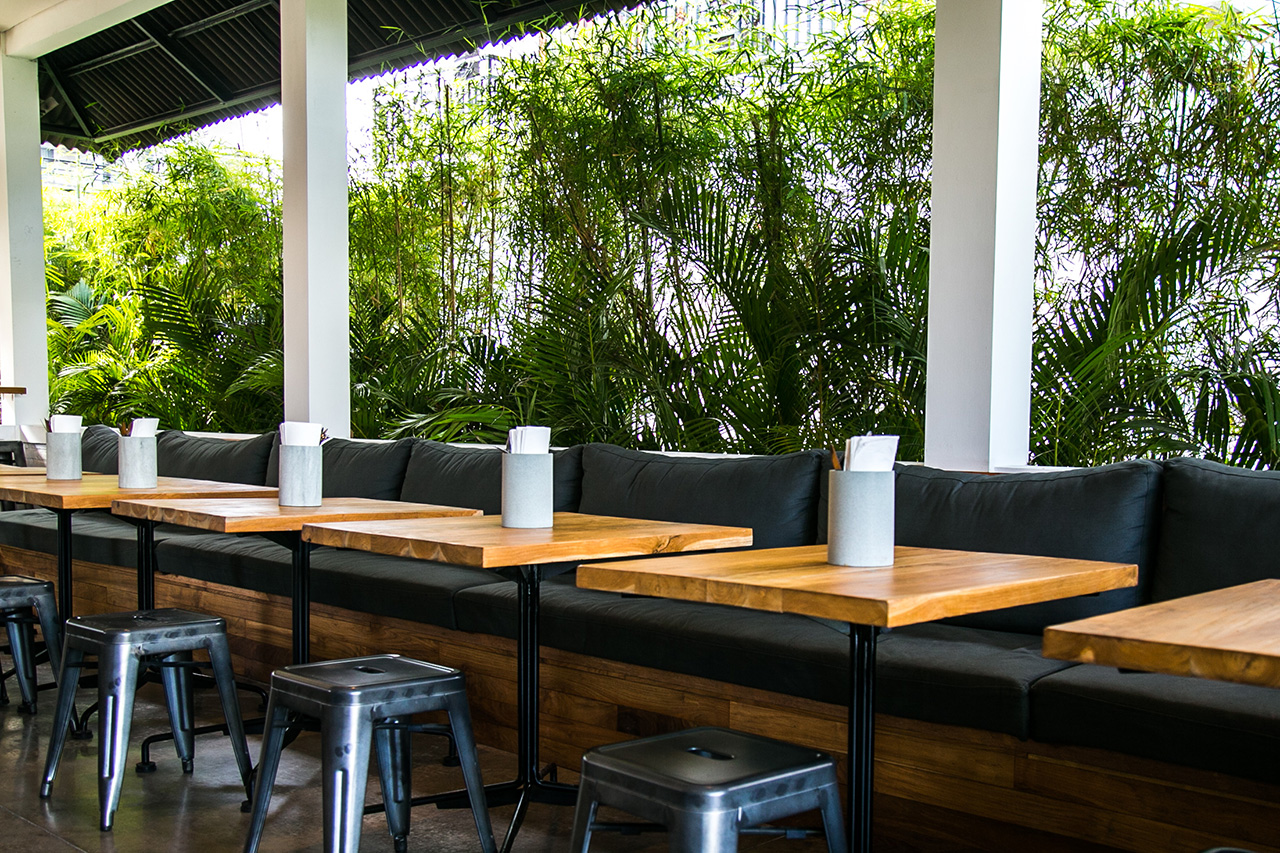 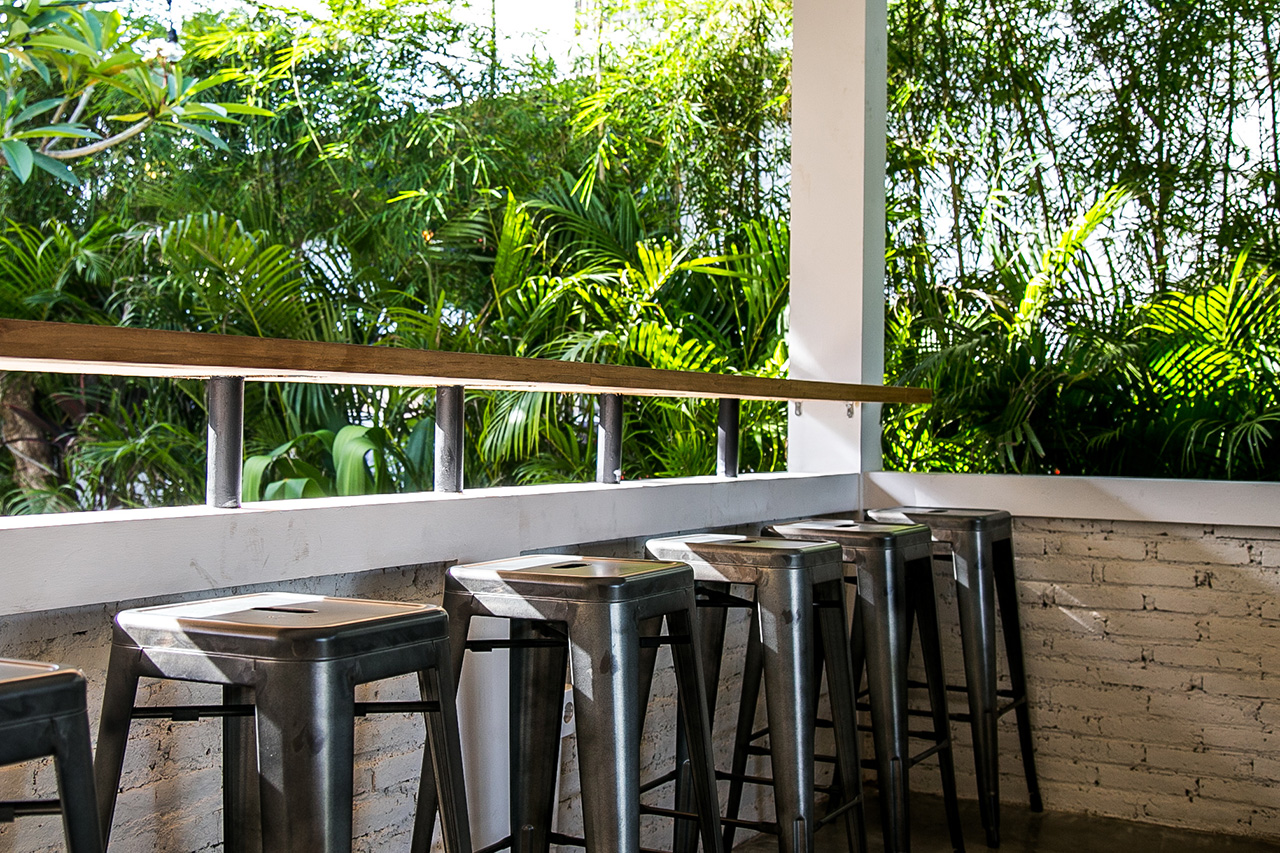 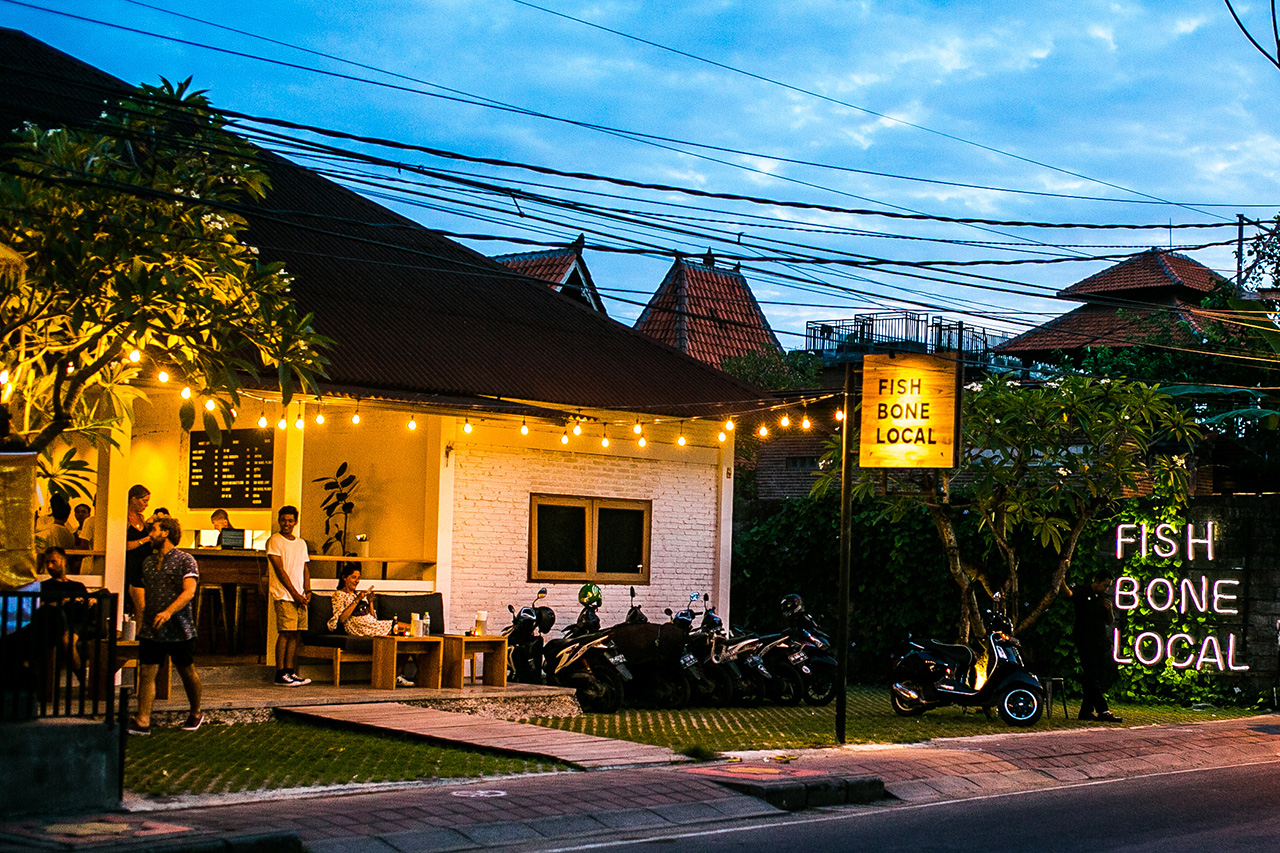 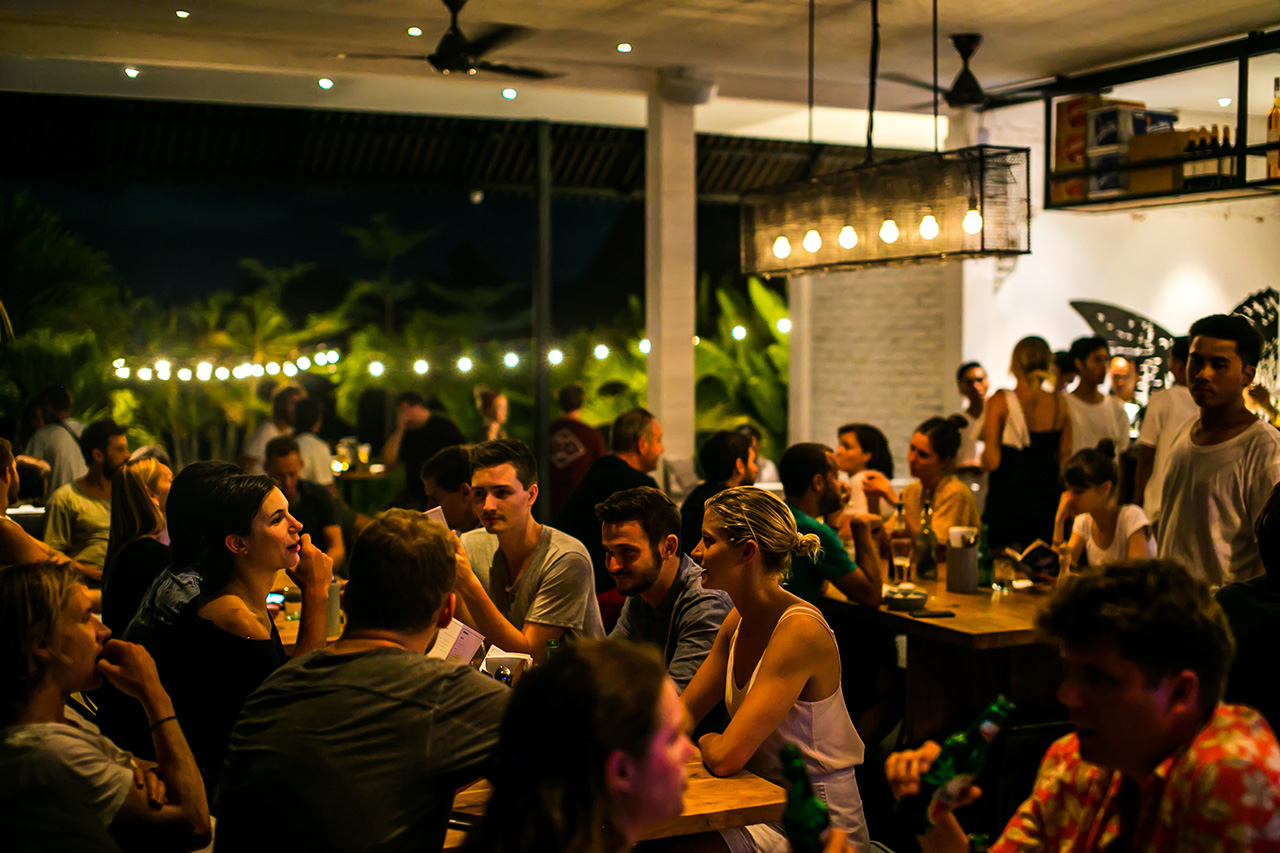 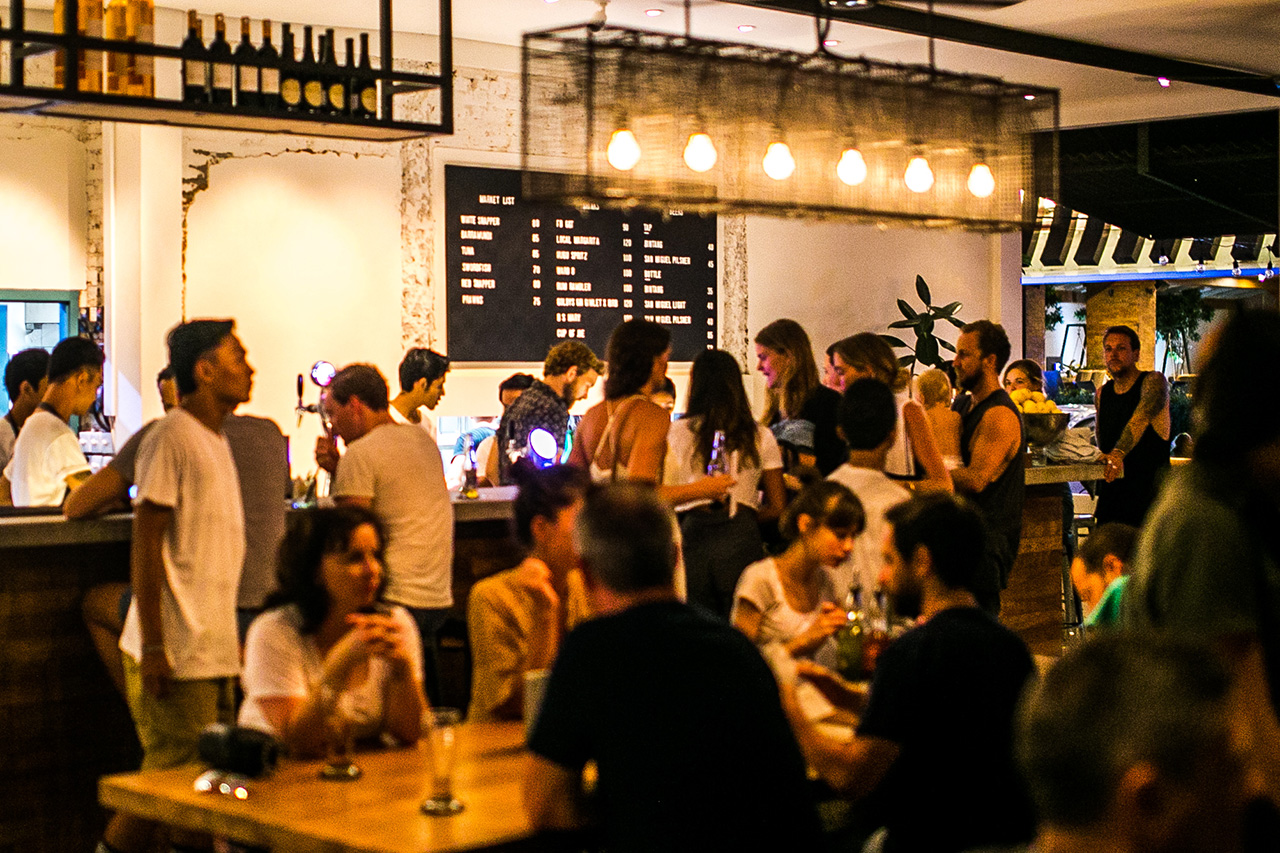 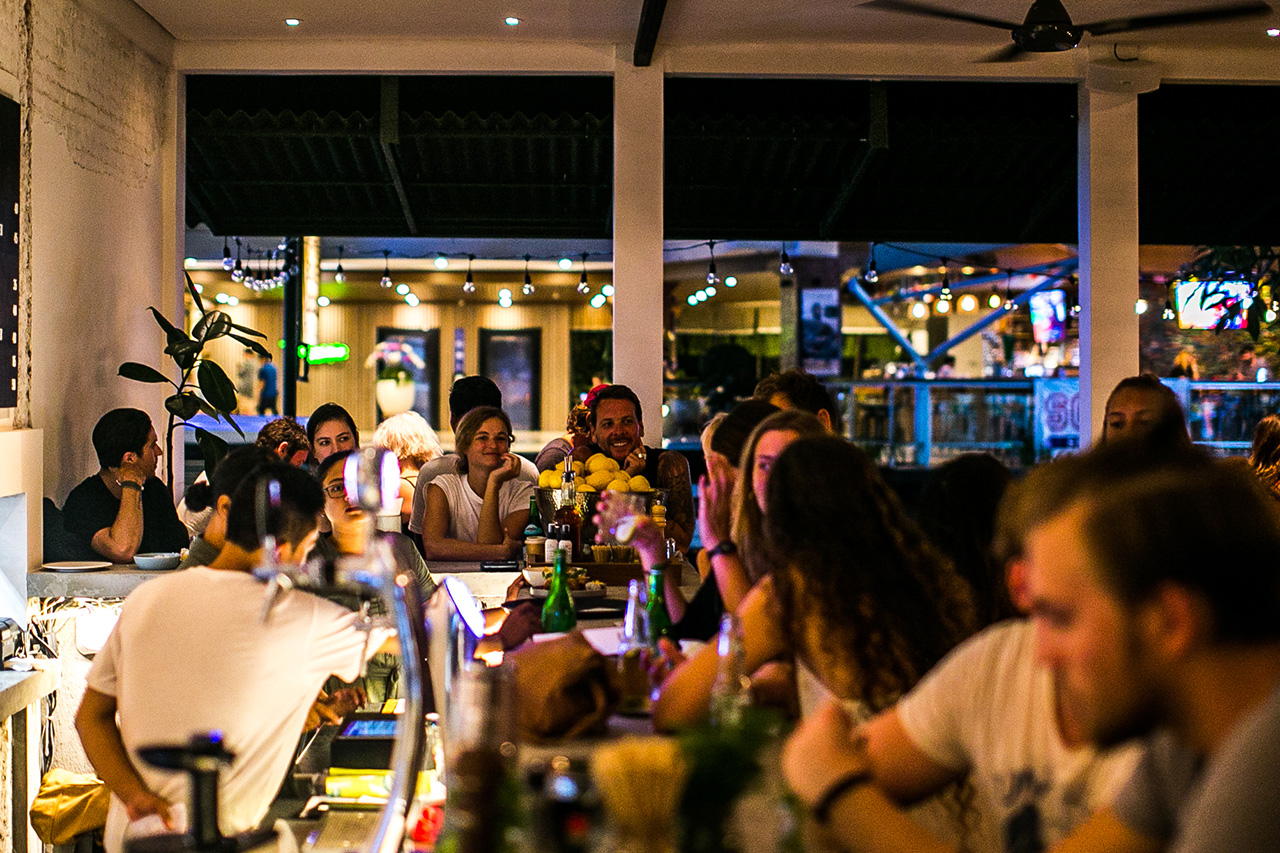 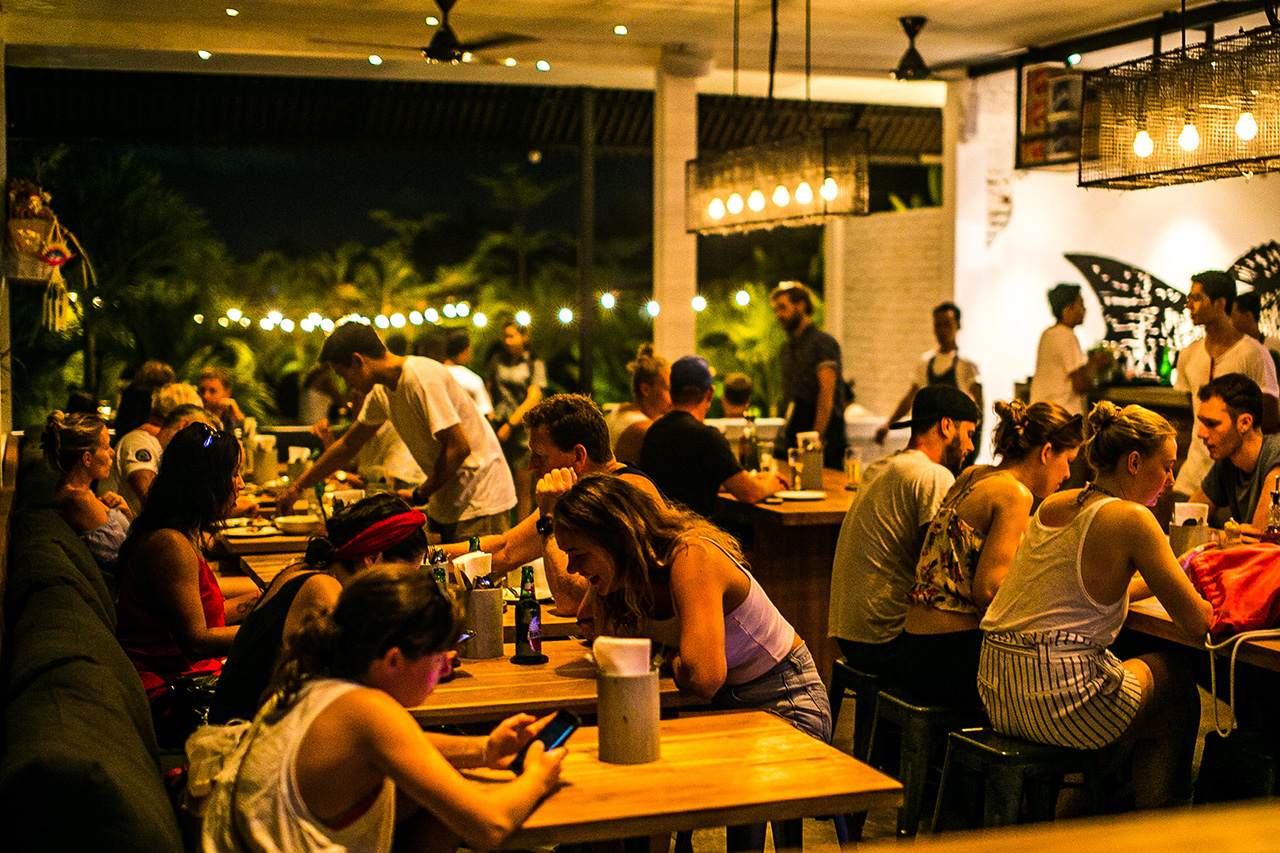 The team at Fishbone Local have five dinner services and one lunch service under their belt when venue owner Isabella Rowell speaks with GRAZIA. Barely one week old, the tide is high at the bar and restaurant, the latest addition to an already strong contingent of Australian-owned and operated venues making waves in Bali – and it shows no sign of abating any time soon.

“We’ve been full every night to the brim – with a waitlist,” says Rowell, not quite believing the reception her debut venue has garnered in its first days. With 15 years’ experience under her own belt, Rowell is no newcomer to the frenetic pace of a life in hospitality, let alone that of Bali’s drinking and dining scene in the height of peak season.

While Rowell manages front of house, there’s a strong support network operating behind-the-scenes to ensure those crowds won’t dissipate. Fishbone Local is the first of three planned venues for the Brett Hospitality Group, a Bali-based joint venture between seasoned hospitality veterans Rowell, restaurateur Dominique Brett and venue developer Brant Bauer. A second restaurant is slated to follow mid-way through the year, with a third anticipated to follow in 2019.

Nine years ago, Rowell was introduced to chef Benjamin Cross through a mutual friend while in Bali. Cross, who is also the executive chef at Seminyak stalwart Ku De Ta, showed Rowell the ropes of Bali’s thriving food scene and the two established a fast and firm friendship. For much of the past decade, the two have laughed at the prospect of one day opening a fish place by the beach. The realisation that a recurring joke between friends has fast become a reality for the now-business partners ranks amongst Rowell’s proudest moment, she says.

Disregarding what’s perhaps best known as ‘Bali time’, development of Fishbone Local was swift. Rowell was still working in Australia at the time that her partners identified both a physical space and one in the market for an elevated seafood offering in the fast ascending resort village of Canggu. “The concept itself was developed within a week”, says Rowell, who was holidaying in Bali as plans began to gather momentum. “We opened six weeks later.”

At a point where Batu Bolong, the main road in Canggu, tapers downhill toward Old Man’s Beach 100 metres from the sea sits Fishbone Local, though those familiar with the area would struggle to recognise the restaurant in its new iteration. Gone are the thatched eaves of its predecessor, Kung-Food; gone too is the sign declaring that “every hour is happy hour”. In its place is slick neon announcing the arrival of what’s sure to be one of the most popular eating and drinking houses on a strip already teaming with well-oiled operations. But where other venues might be seen as catering almost exclusively to certain clientele, part of Fishbone Local’s allure lies in its everyman credentials. On a given evening, you might see families with children taking advantage of a spacious backyard, locals carving out familiar grooves at the bar or tourists arriving barefoot and dripping in search of a post-surf feed.

Considering Fishbone Local’s enviable proximity to the ocean, there was little alternative but to skew the food offering around seafood. “I’ve always loved beach barbecue,” says Rowell. “Down at the beach, [the locals] pull the fish up [onto] the beach and cook it in front of you. I wanted to do something similar but [within] a restaurant [setting] and with our aesthetic.”

The focus at Fishbone Local, Rowell says, is on clean food served without pretention and prepared using simple techniques. A great deal of emphasis is placed on the produce itself, and that whatever is sold be sourced ethically, sustainably and with fair trade practices at the front of mind. A partnership with a local non-government organisation, Bali Sustainable Seafood – who work in tandem with the Indonesian Handline Fair Trade program to support the development of fishing communities through improved market access and community development – supplies the restaurant with its locally-sourced, namesake product.

“You can taste the difference [in] the quality,” Rowell says of their mainstay fare. “It all starts with good produce.”

And while Fishbone Local’s seafood sits front and centre on a market list that takes pride of place above the bar, a globetrotting selection of sides sees diners tailor their meal in the same way they might a travel itinerary. A tuna poke, a plate lathered in guacamole served with tortilla chips and fish tacos piled with grilled pineapple and chipotle make for picture perfect Mexican bar snacks by way of Hawaii; edamame, a Vietnamese style slaw, spicy prawn toasts and grilled Chinese broccoli send the palette ricocheting around Asia. Pan seared barramundi served with Sambal Matah, a local condiment smacking of shrimp paste, and a barbecued swordfish tikka skewer with turmeric and coconut speaks to Fishbone’s titular local credentials. Potato scallops, beer battered fish and a deep-fried Snickers bar whisk diners from Bali back to Bondi at breakneck speed. Perhaps with the exception of the fried chocolate bar, all are designed to pair unfailingly well with the catch of the day.

In addition to the food offering, the interior is also very much Rowell’s vision – something that she says has remained unchanged from the beginning of the development process. “I wanted to reflect the surroundings,” says Rowell. “It’s so beautiful… I didn’t want to build something obnoxious. I wanted to have the feel of natural elements.”

Recycled timber has been used generously throughout the space, lining the bar, the banquettes and providing the tabletops alike. The glassware too is recycled, as are the menu baskets fashioned from fishing nets; erstwhile crab traps have also been repurposed to create scene stealing lighting fixtures that anchor the space. Exposed brickworks rendered white and great swathes of raw concrete contribute to an unencumbered space that, like the food, requires little by way of maintenance or unpacking. At Fishbone Local, what you see is very much what you get.

Equally uncomplicated are the beverage options, which Rowell says are informed by what she and her business partners want to drink when in Bali, where Indonesia’s steep import taxes on Australian wines limit the number of vinous drops on offer and bar menus skew cocktail heavy. Where for the most part the island’s cocktails err on the side of saccharine, Fishbone Local’s place a great deal of emphasis on natural fruits, juices and minimal sugars. There’s an Icerbergs style gimlet made using restaurateur Maurice Terzini’s Goldy’s Gin and enlivened with kaffir lime; another cocktail, a Cup of Joe, makes use of cold brew made by Expat Roasters – another Australian-owned enterprise in Seminyak.

Rowell is no stranger to opening venues, having opened outposts for the Icebergs Group both in Australia and abroad, including the Seminyak hotspots Motel Mexicola and Da Maria. After opening the latter, Rowell returned to Australia to open Terzini’s Bondi Beach Public Bar before Bali came calling again. Fishbone Local, however, is in many ways her true first. It’s her first concept seen through from ideation to that first week of service, a concept that has remained unwavering even in the face of first-venue nerves. It’s also the first in which she has had a say in everything – a feat made possible only by drawing on the confidence and clarity of vision gleaned from those restaurateurs who have led her to this point.

“I’ve learned so much from the people I’ve worked for, from Nicole Galloway at Tetsuya’s [to] Maurice Terzini and Adrian Reed in Bali,” says Rowell. “I’m most proud of taking the best parts I’ve learned from them and… rolling that into my own venue.”