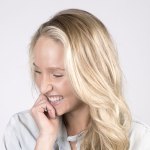 Get here fast, then take it Slow 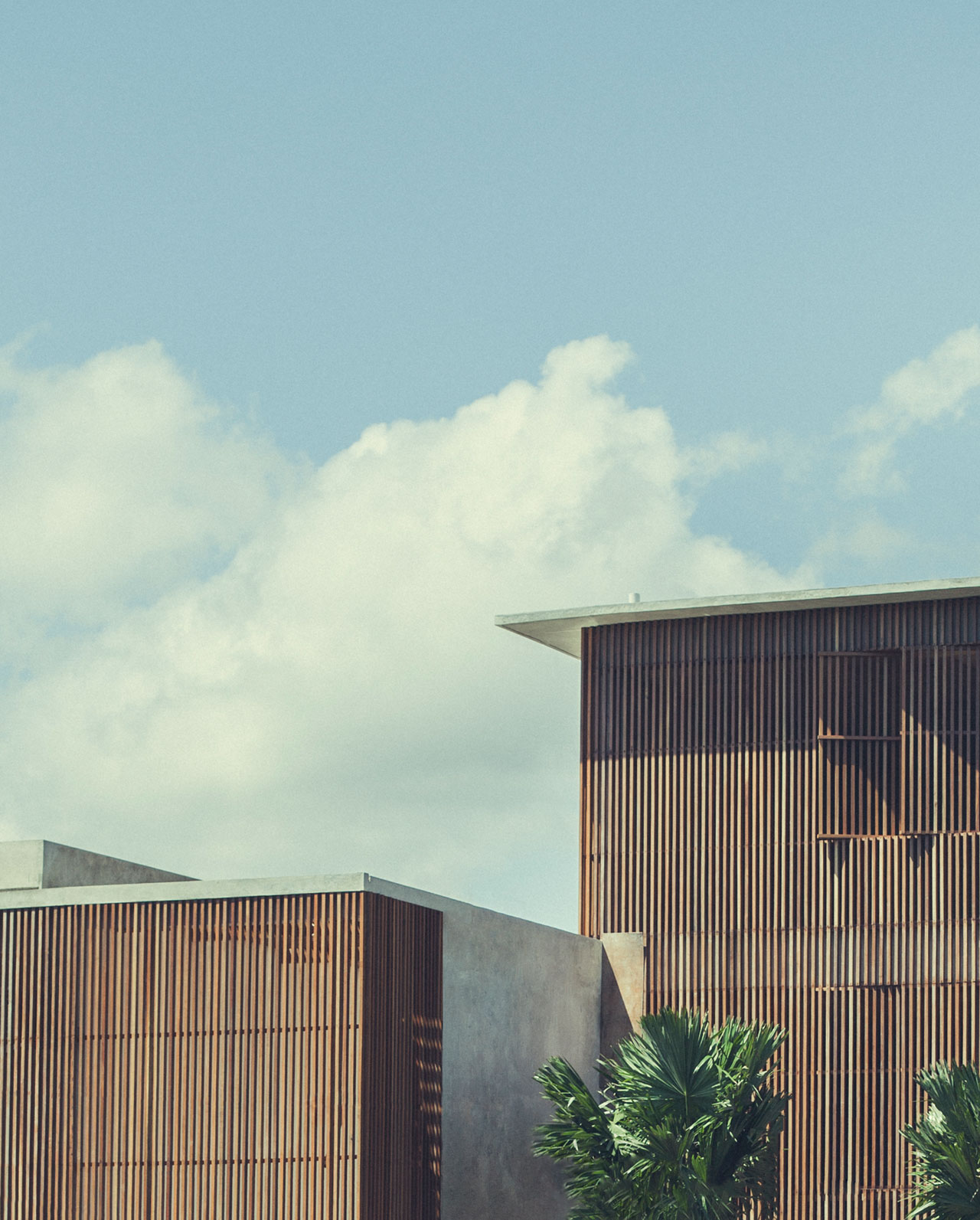 The 'tropical brutalist' exteriors of The Slow, a recently opened boutique hotel in Canggu, Bali 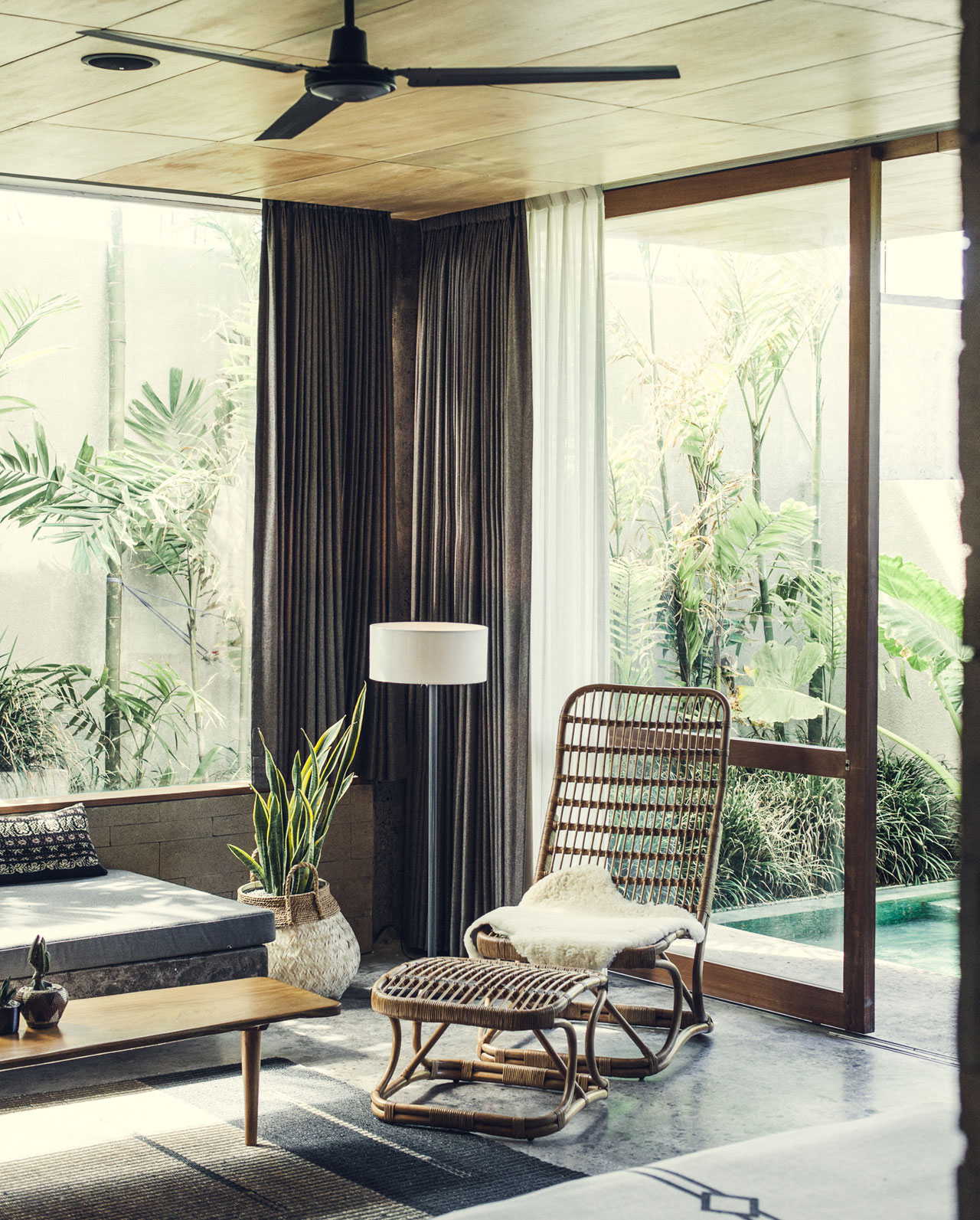 The interior of Room 3, a ground floor Pool Suite 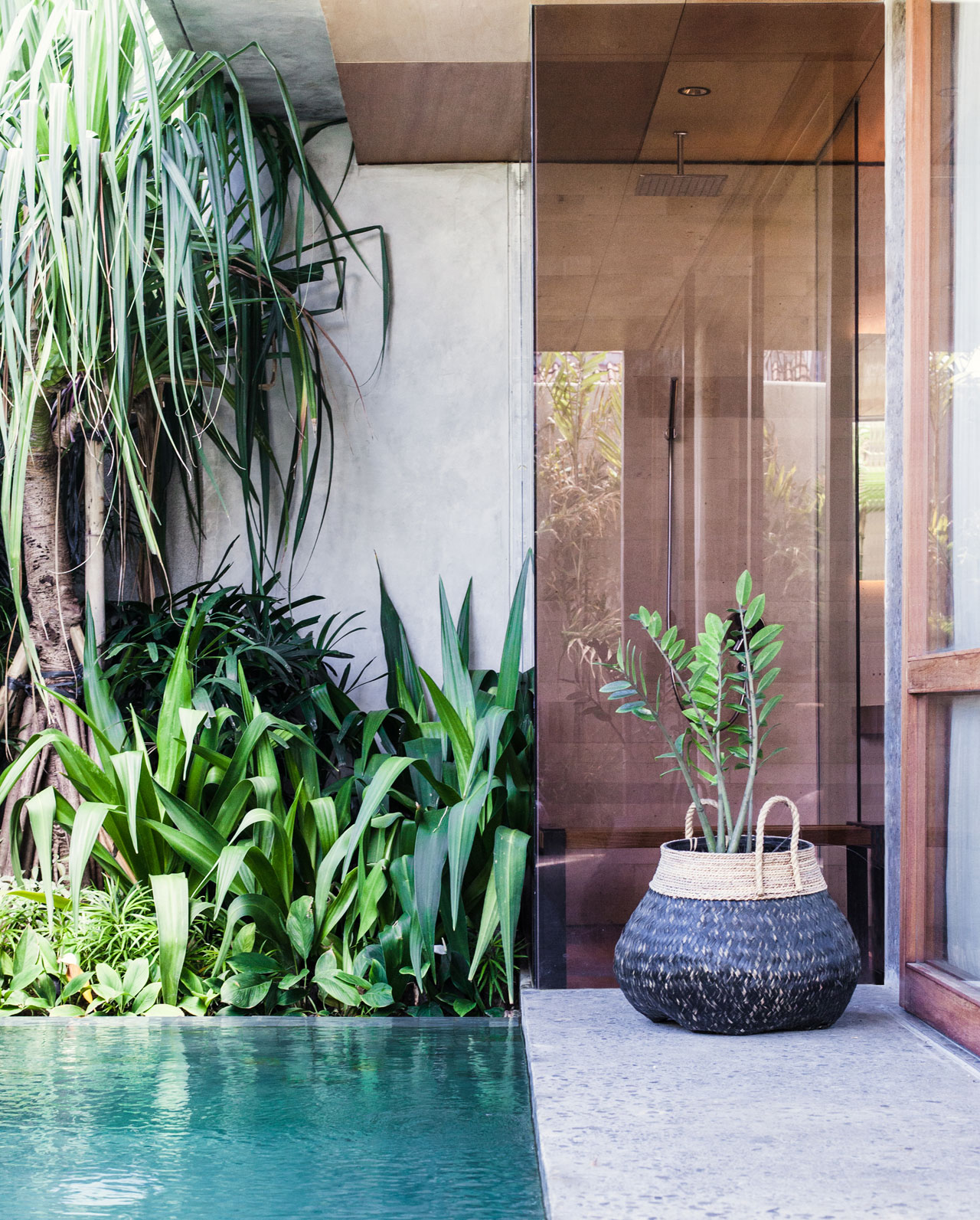 The Pool Suite courtyards are lined with verdant greenery 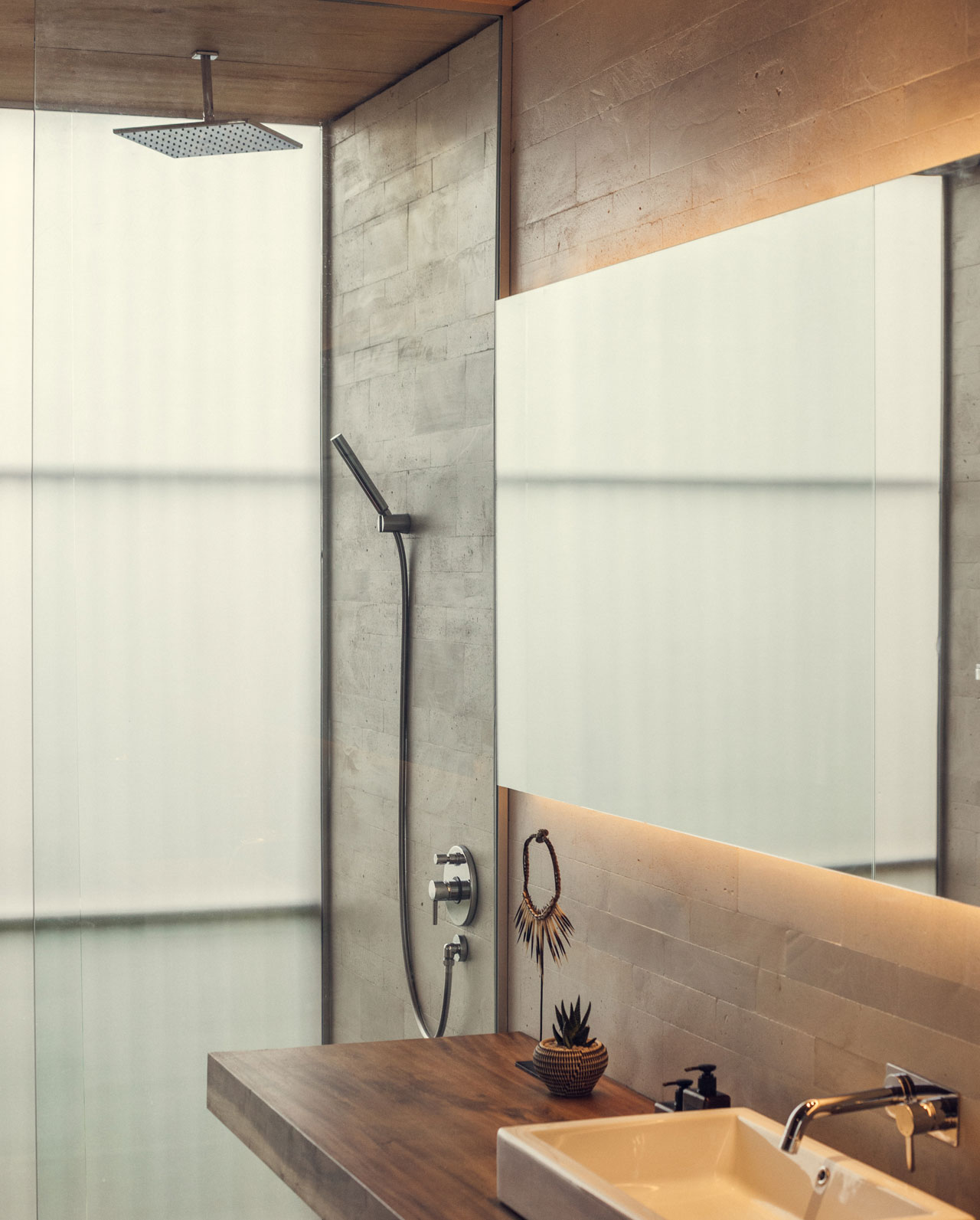 A bathroom interior at The Slow 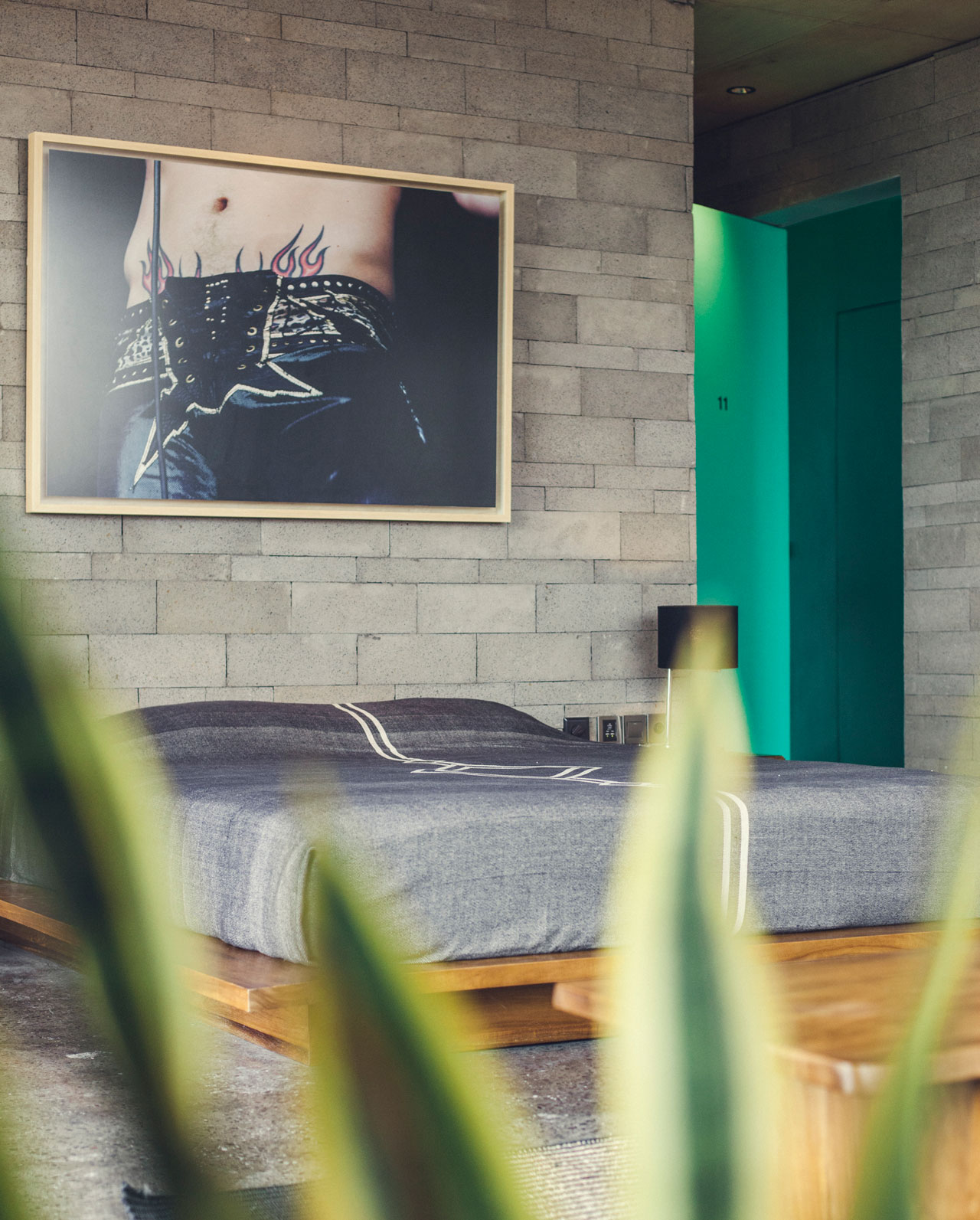 Art features prominently throughout the hotel's public and private spaces 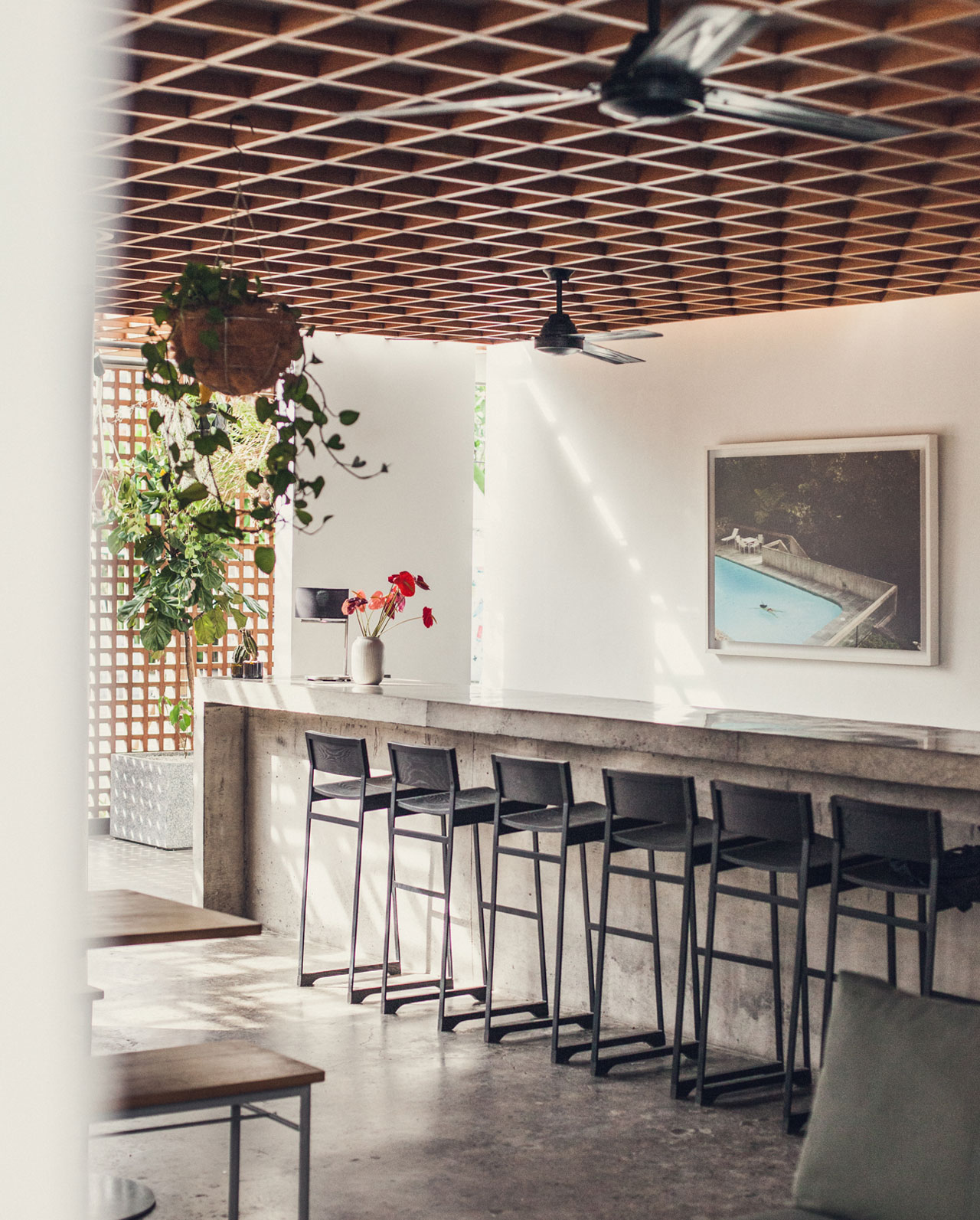 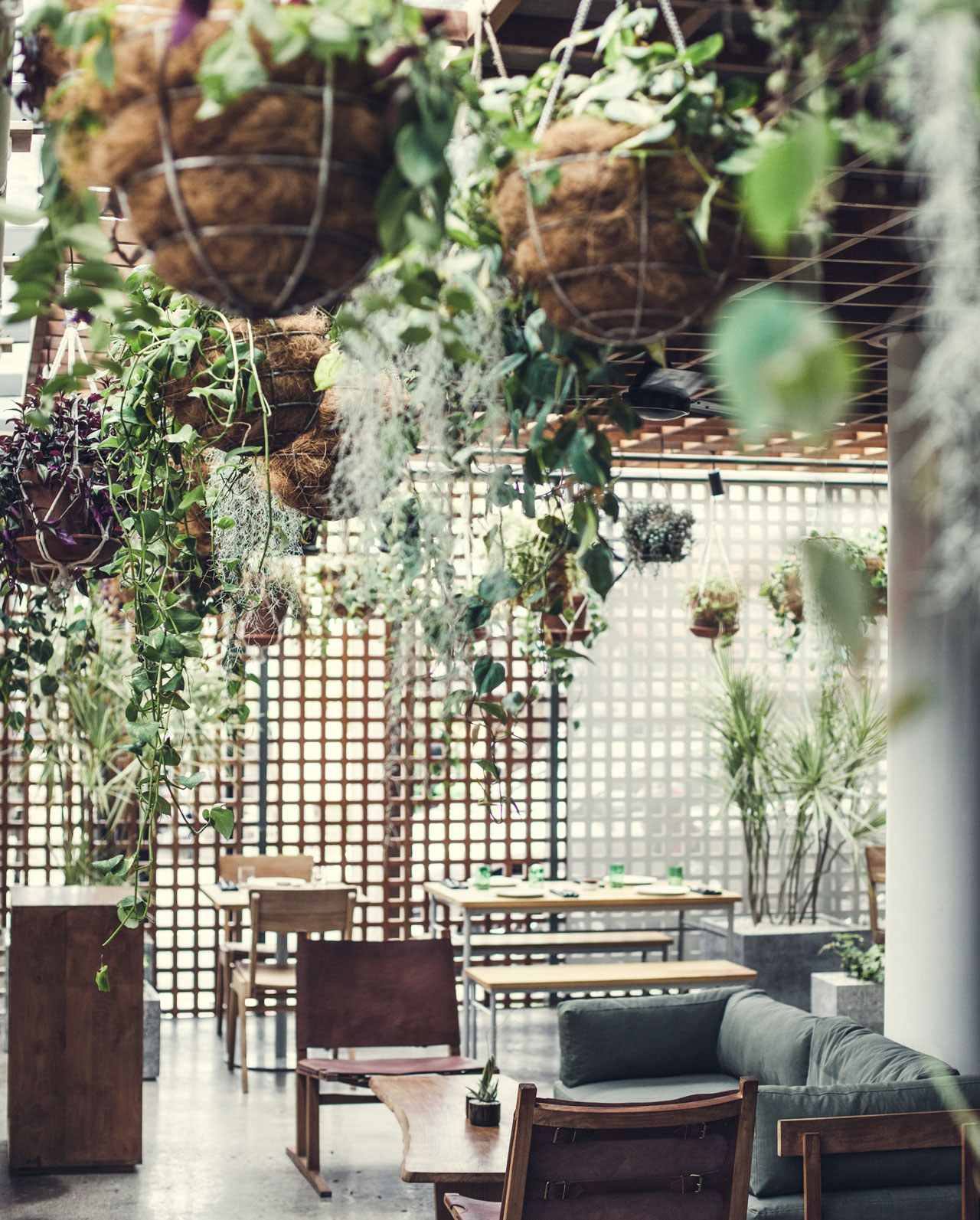 Overhead, a hanging garden contributes to the 'tropical brutalism' aesthetic 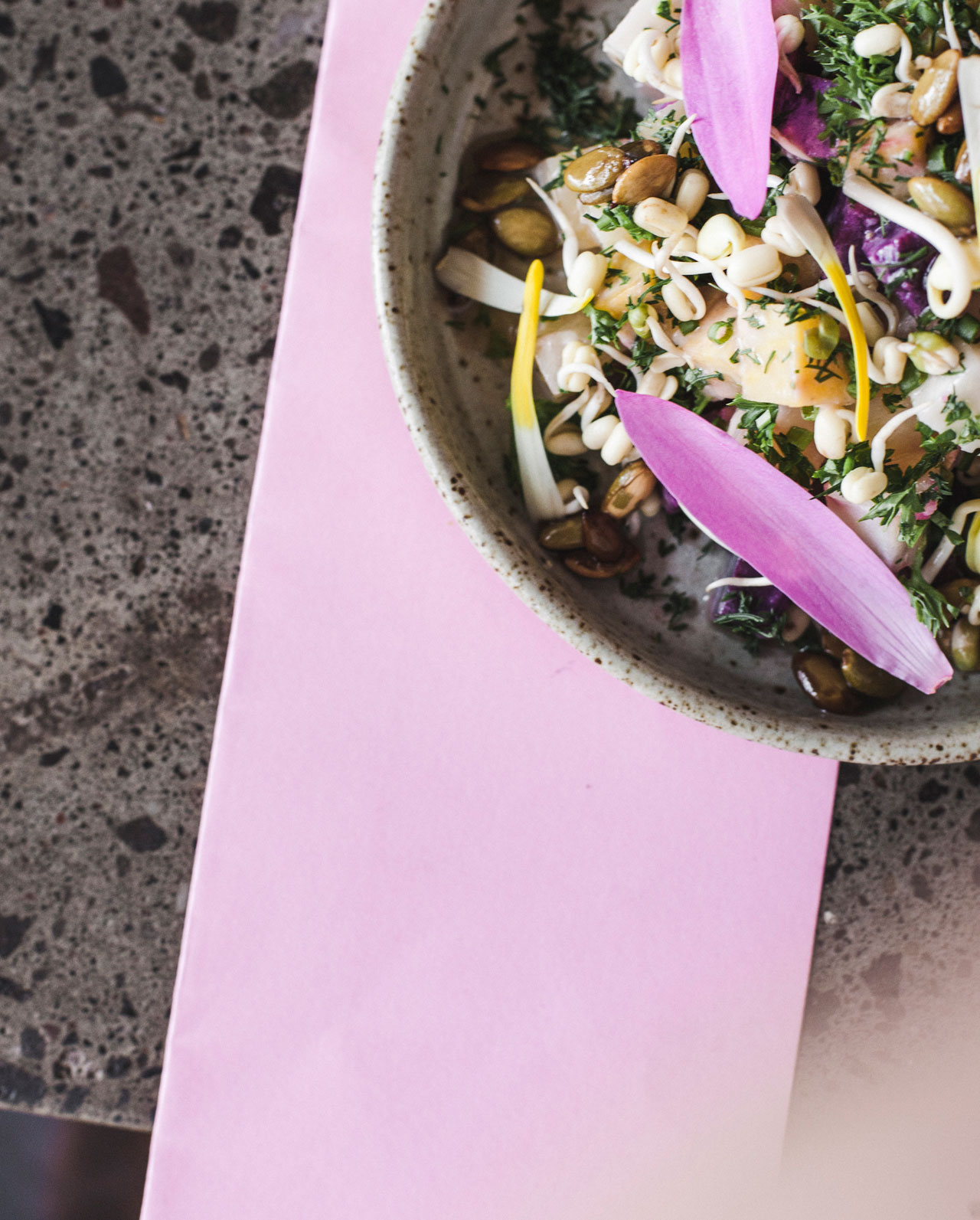 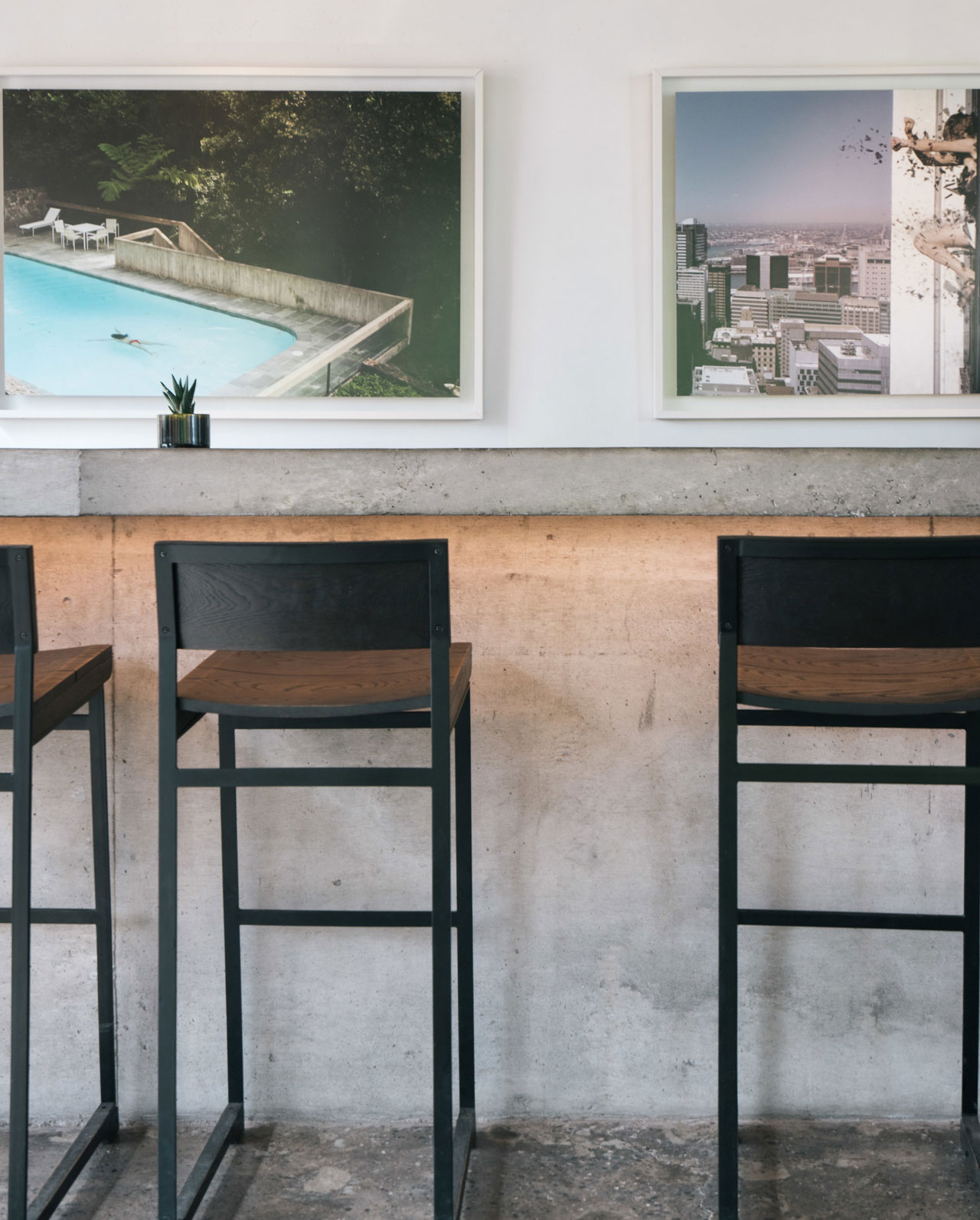 Pieces from the co-owners personal art collections, including this still from Daniel Askill's We Have Decided Not To Die, feature prominently throughout 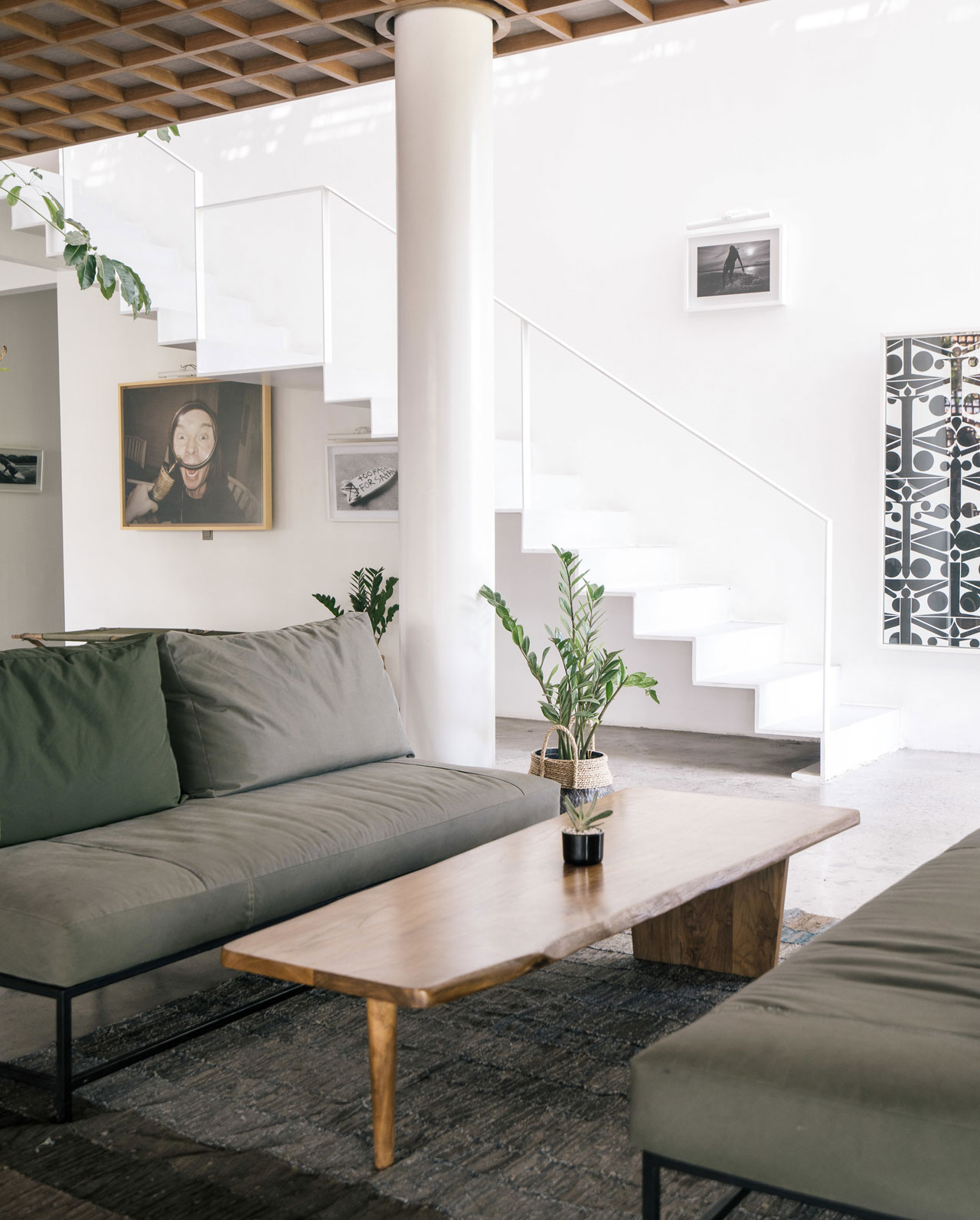 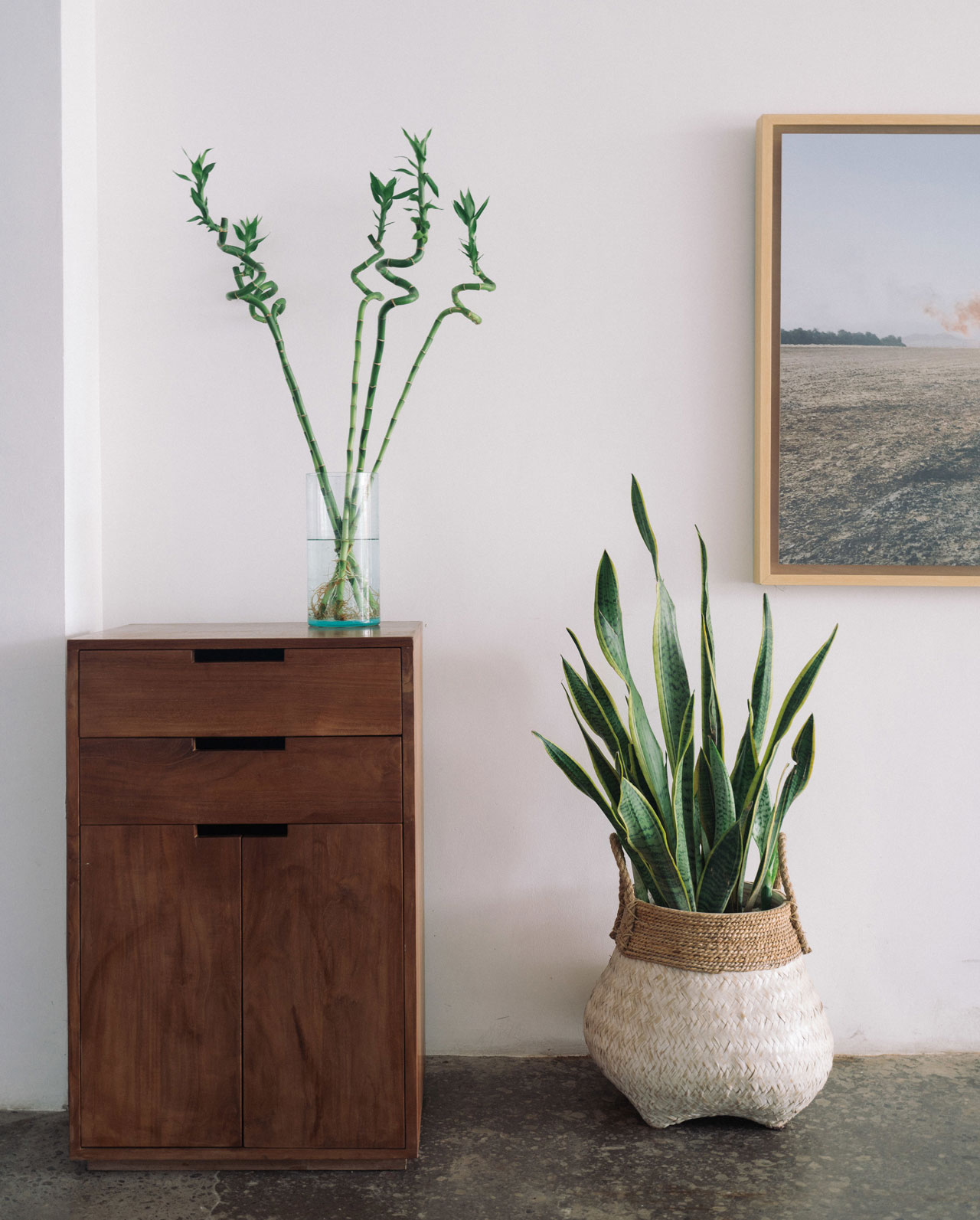 Details at The Slow

It was the juxtaposition of The Slow against Batu Bolong that first lured me in. The level of polish and architectural genius set against the chaotic style of Canggu’s main strip. Well, it sticks out like a sore thumb. You can’t not take a look. Yet it’s the people inside who keep me coming back, and these people define the boutique hotel best.

Whether it’s a gracefully ageing elderly woman wearing denim cut offs or a young man in a vintage tee and Docs, there’s an unspoken uniform here – cool above all else. Then you discover The Slow’s founders are the guys behind Ksubi and it all makes sense. In fact, it’s to be expected.

Created by George Gorrow, Gareth Moody and Gorrow’s wife, Cisco Tschurtschenthaler, the trio’s latest venture has been as carefully crafted as a pair of Ksubi jeans. Set in Bali’s creative hub, Canggu, it’s pitched as a boutique hotel but is a concept space more than anything else. Self-described ‘tropical brutalism’ takes aesthetic effect throughout the entire venue, from the 12 spacious hotel rooms to the restaurant and on to the gallery (also known as Room 13).

Between the check-ins and dine-ins, exhibitions are on rotation here, from Ozzie Wright to Woody Gooch. When artists and photographers aren’t showcasing their latest work, George and Cisco’s personal art collection is on display. And then there’s the rooms.

The Slow’s tagline is ‘get here fast, take it slow’. It’s the antithesis of Gorrow’s youth, of his ‘live fast, die young’ days, and his latest learnings have taken full-effect in The Slow’s suites. Every aspect of the stay is designed to help trendsetters leave their busy lives at home and settle into a slow escape – one best found in island life. The suites are intentionally TV-less. Only coffee table books and a consistent soundtrack by Reverberation Radio are there to entertain. Everything is perfectly placed for intimate interaction, from the concrete couches perched opposite the beds, to the soundtrack tuned on a lighting dimmer made adaptive to the mood (much like the lighting).

The Grand Suites are spacious with slatted windows overlooking rice paddies, capturing the charm of Canggu. The suite that reigns supreme though is the Pool Suite. With rooms ranging from $200 to $350 per night, it’s worth taking the more expensive route. Located on the ground level, each pool suite is accompanied by a long pool decorated with a jungle-like garden. It makes the space feel more livable if you’re intending to spend bulk time in your room. For the restless though, Batu Bolong beach is only moments away and a quick stroll to the ocean will reveal rolling waves and cheap longboard hire.

Locals and tourists amalgamate in the restaurant daily as all-day dining brings both parties to the table. Seasonal, sustainable dishes are on offer and – when it comes to lunch and dinner – designed to share. Travels through South America, Europe and Asia have influenced The Slow’s chef Shannon Moran and what prevails are innovative meat, seafood and plant-based dishes. Don’t look past the KFB (Korean fried broccoli), squid ink noodles and cos heart salad. If you do, order the fish dip, beef and little potatoes. Actually, order all of the above or forever regret it.

A mean coffee and cocktail are found in the restaurant too, so for the love of rum order the Columbian. Or if convention is more your style, stick to the negroni. Either way you’ll dine amongst the details, including Cisco’s ceramics collection, Cisco and the Sun, eclectic artworks, teak furniture and a record player nestled in the corner. The exclusive flagship store of Gorrow and Moody’s latest menswear label, Non-Type, is attached to the boutique hotel and features loose, minimal t-shirts, shorts and accessories self-proclaimed as luxury surfwear.

Details aside, Gorrow’s journey here tells the real story. Seven years ago he decided to hang up his ‘live fast’ boots and turn to island life with his wife. They found land to build on but before they could begin an opportunity had them heading back to New York. Five years later they packed up their NYC lives again and returned to their secured land, which was now on the busiest street in Canggu. Their home evolved into a boutique hotel and The Slow was born. As I told a friend this tale they laughed, projected a knowing smile and their response deserves the final word.

‘Everything Gorrow touches turns to gold.’

Tile and cover image: Courtesy of The Slow

An Ode To Athens: The Modernist Athens Makes The Underrated Greek Capital Feel Like (A Chic Version Of) Home
Next page