Perhaps due in part to having its headquarters in beach hotspot Byron Bay, the name Spell & The Gypsy Collective tends to conjure thoughts of idyllic beach holiday outfits and maxi dresses blowing in Greek Island breeze. (The cult-status Australian brand has indeed shot past collections in both stunning locations, along with Morocco for its Lionheart range.)

That’s probably why the label’s latest campaign, shot hundreds of miles from the deep blue in the New Mexico artist haven of Santa Fe, is possibly its most striking yet – and GRAZIA has the jump on the official fashion video and photos.

It might not be the first time Spell has shot in the arid desert (it’s 2016 Revolver campaign starring Shanina Shaik was shot near Broken Hill in central Australia), but it’s the first to be captured in America’s wild west.

Rustic and romantic, the picturesque backdrop is actually the former Ghost Ranch home of artist Georgia O’Keefe, widely regarded the “mother of American modernist art”. Other campaign snaps boast the mighty-but-arid Grand Canyon in their background. Even the supermodel muse for the collection Alyssa Miller, who stands centre frame in cowboy-heeled thigh-high boots and a black felt hat, harks from dusty Texas.

Inspired when designer Elizabeth (Lizzy) Abegg visited and fell in love with Santa Fe in 2017, this new Jasmine collection is named after the “one-part cowgirl to two parts hopeless romantic” fictional character she imagined while creating it.

Loyal fans will be pleased to know there are plenty signature Spell elements in Jasmine – intricate prints, flowing maxi skirts, sexy sundresses, cropped tops and cute jumpsuits all in white, soft sand and pastel colour tones – just as there are stark departures, like the sexy, rustic khaki slip dress and flower power playsuit that’s a nod to the hippy ’70s.

As always, the styling, in this case by Brydie Mack, adds to the dream. Indeed, it’s practically a masterclass on how to dress for Australia’s outdoor music festivals. Tassled mid-thigh boots are the dream compliment for many of the campaign looks, which the rest are teamed with over-the-knee suede ones featuring nude stitching. It’s precisely the kind of wardrobe you’d imagine self-confessed “model, singer and vintage-lover” Miller wears when she roams.

Other Jasmine collection look, like those in this gallery, boast a more signature Spell aesthetic

The exotic-looking 29-year-old might have imbued a romantic Mid-Western American character for this video, but Miller does have one very significant connection to Australia: she’s married to Cameron Avery of Perth band Tame Impala. The pair currently lives in Austin, Texas with a menagerie of rescue animals, “three dogs, a cat, 10 chickens, two ducks and a pot-belly pig”. Luxe bohemian indeed.

The Jasmine collection drops at 10am on Thursday, July 26 on the Spell & The Gypsy Collective website. 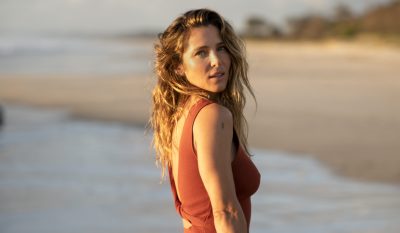 Elsa Pataky On Skincare, Soothing Self Care Rituals And Life In Byron Bay