Emily Cooper Is Back and She’s Still Wearing a Beret

'Emily in Paris' has officially been renewed for a second season

It’s official: Emily in Paris (pronounced Eh-ma-lee in Pah-ree) has already been renewed. Whether you loved or hated Darren Star’s latest show (or have yet to decide), there will officially be a second season full of more pain au chocolat, berets, and complicated love triangles.

The Netflix show stars 31-year-old Lily Collins, who plays a 20-something-year-old named Emily Cooper. The plot begins when she’s offered a one-year gig in which she’d be required to transfer to Paris to work at a luxury marketing firm called Savoir. She says “oui,” and jets off on her Parisian adventure.

There, the star’s protagonist finds herself newly single, with an influx of Frenchmen vying for her attention. We won’t give it all away, but the Savoir employee deals with work drama, a language barrier and those aforementioned love triangles.

When the marketing executive isn’t trying to appease her sassy boss, Sylvie, she’s growing her Instagram page, which is named — you guessed it — @emilyinparis. Outside of her day-to-day Savoir job, she’s an influencer, with the wardrobe to prove it. Throughout the first season, she dons an impressive array of pieces from luxury labels like Off-White, Chanel, and Ganni.

Her wardrobe, brought to life by the iconic Patricia Fields, has been the most significant source of criticism. But, based on the show’s short season two teaser, it doesn’t look like the protagonist’s fashion aesthetic is going to be much different in its second season. At the end of a video shared on the show’s Instagram page, Collins is filmed wearing a white beret teamed with a tan and white cardigan. Emily Cooper hasn’t changed one bit.

The show’s season 2 renewal was announced via a letter written by Emily Cooper’s boss at Savoir. The fictional (yet official-looking) document has practically gone viral on social media. 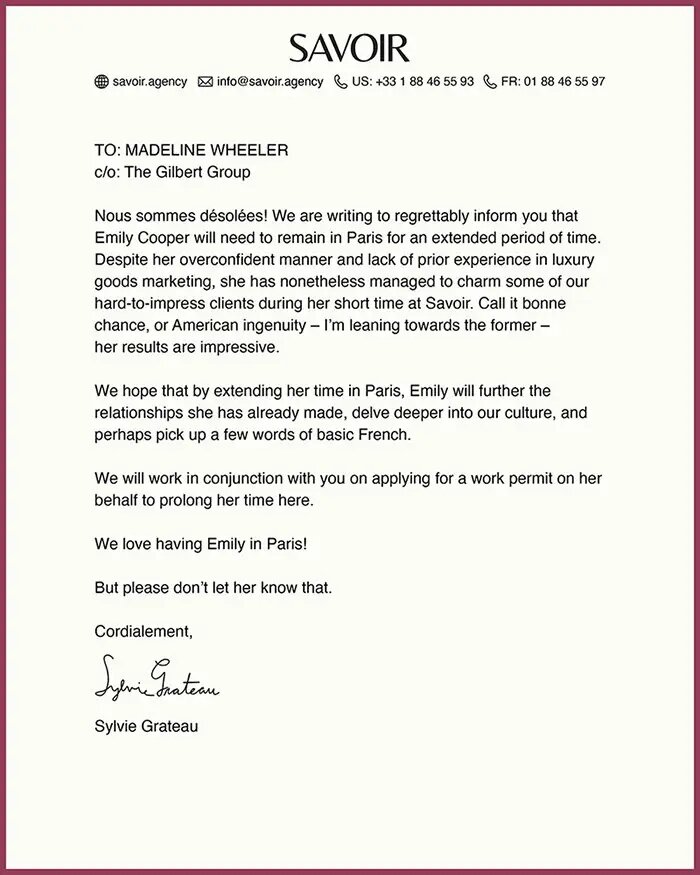 “We are writing to regrettably inform you that Emily Cooper will need to remain in Paris for an extended period of time,” writes Cooper’s boss in the letter. “Despite her overconfident manner and lack of prior experience in luxury goods marketing, she has nonetheless managed to charm some of our hard-to-impress clients during her short time at Savoir.”

What this means for Emily in Paris fans is that the next season will most definitely take place in Paris, in the rare case that you feared it wouldn’t. This also means that we’ll finally find out the fate of Cooper’s friendship with Camille, and the state of her relationship with Mathieu. But the biggest question of all that may or may not be keeping us fans up at night is whether or not she will end up with her neighbor Gabriel.

Hit play on the video below to experience the season 2 announcement in its entirety — and most importantly, get a taste of the Parisian fashion that’s to come.

And if you’re feeling inspired by the main character’s style, we implore you to shop GRAZIA’s beret edit, below.

Mark Your Calendars, This Is How You Can Score A Ticket To Afterpay Australian Fashion Week
Next page