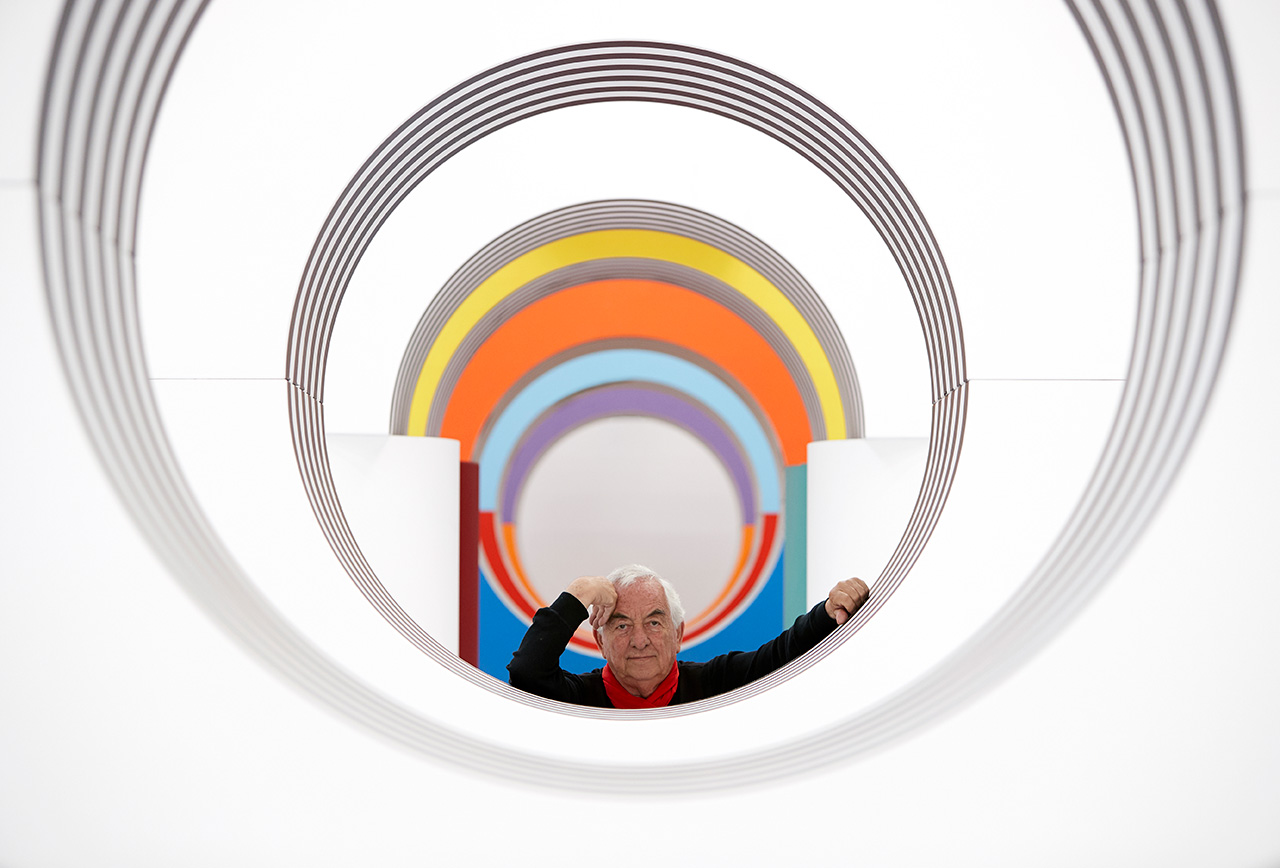 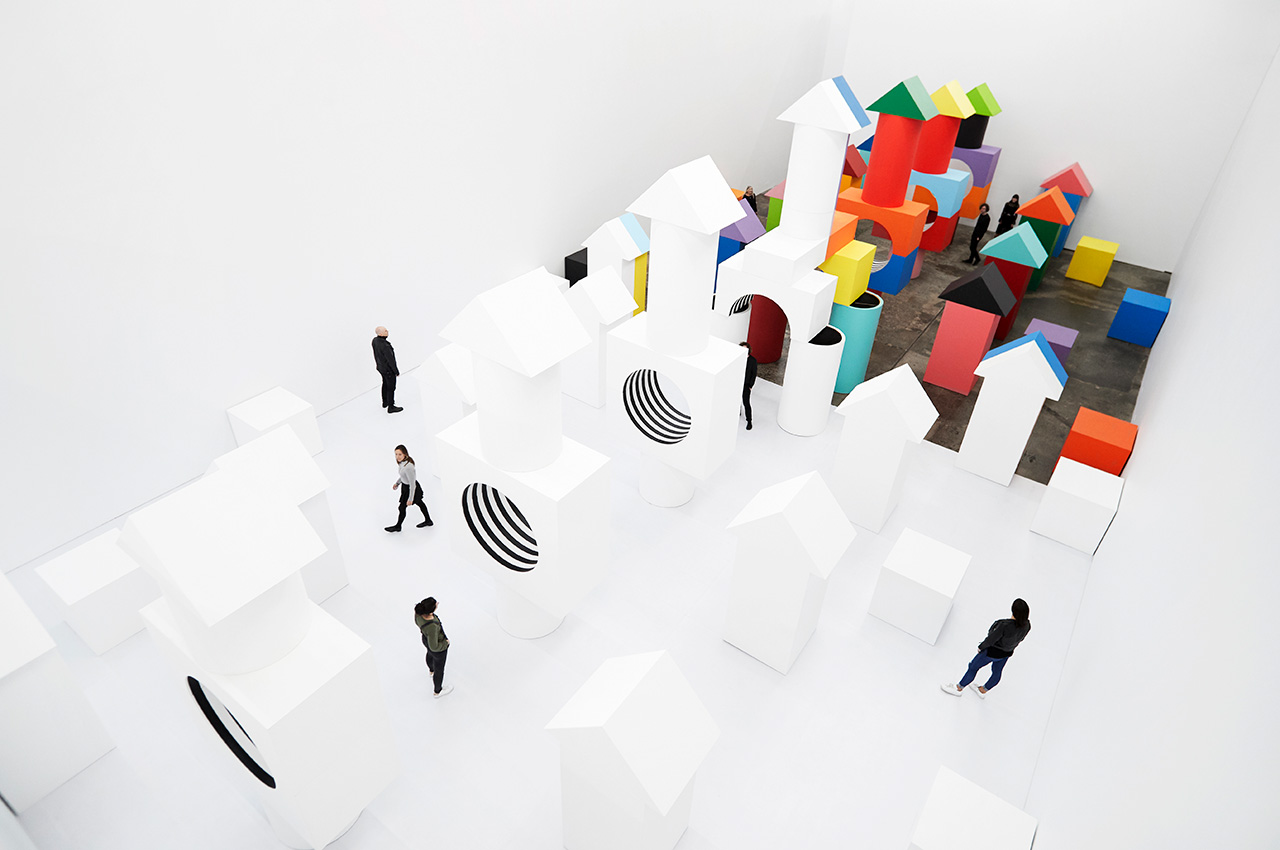 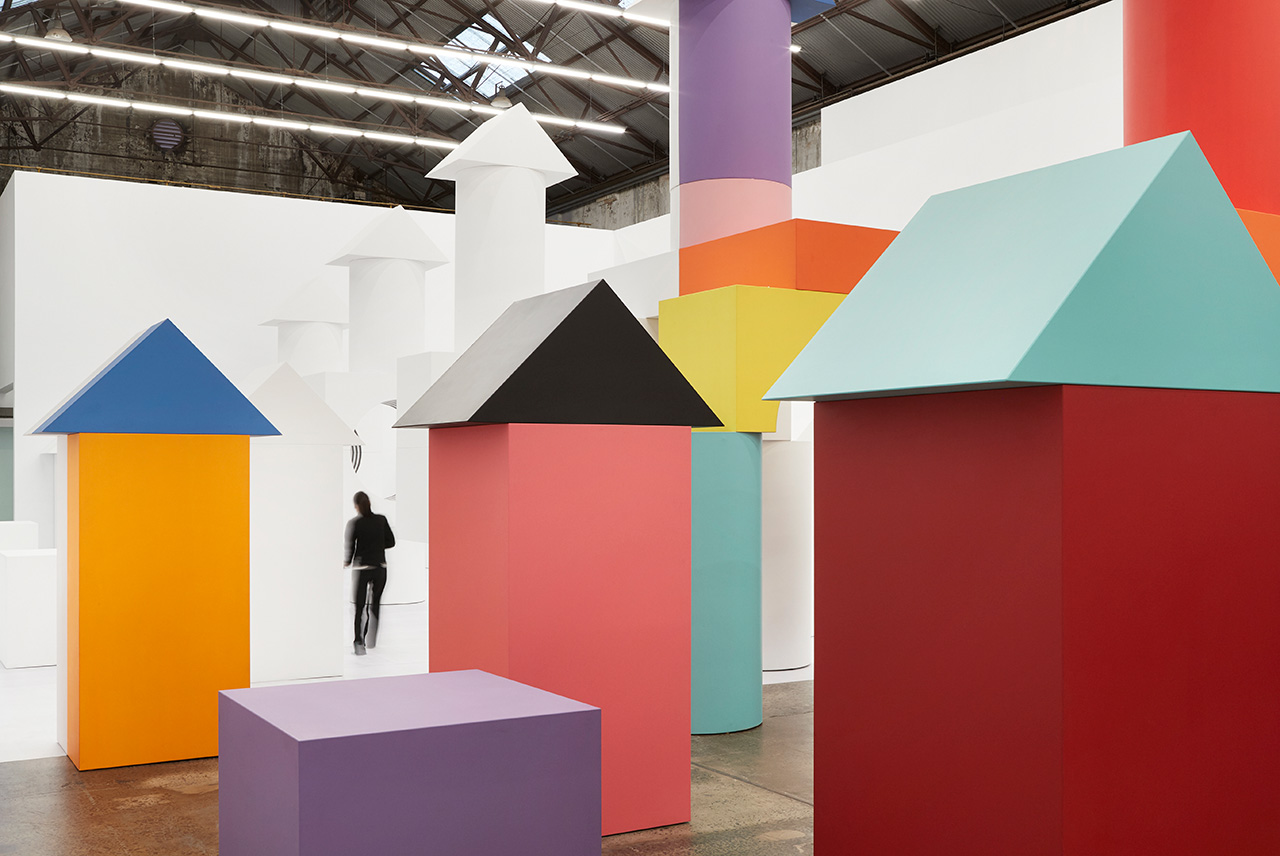 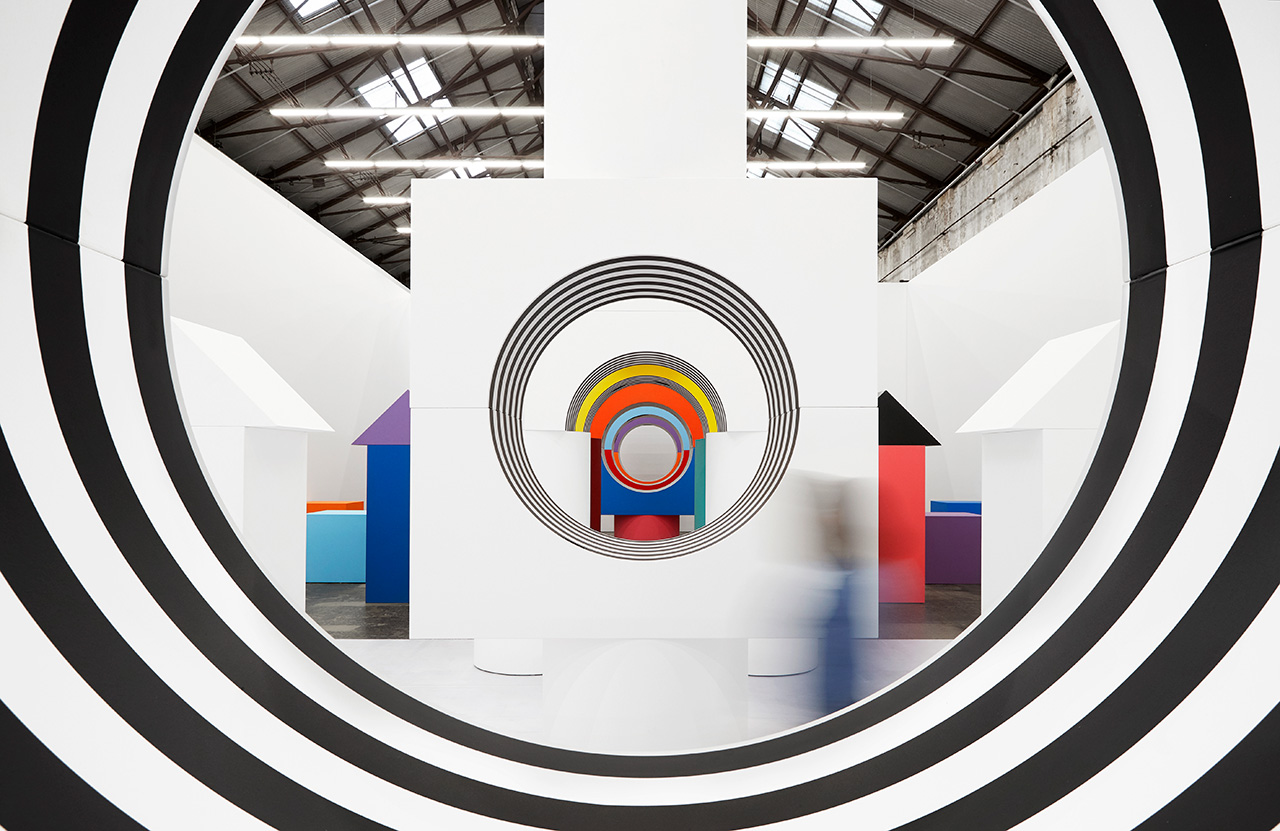 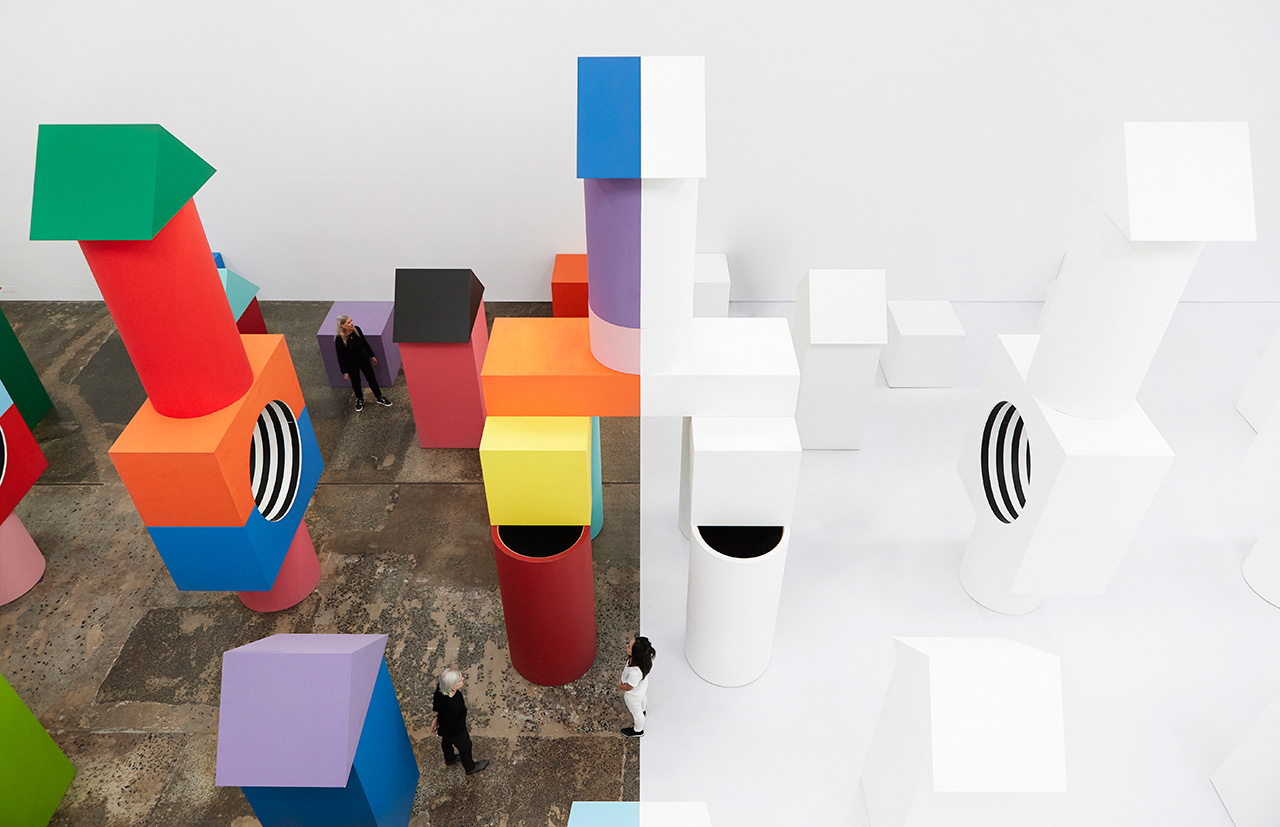 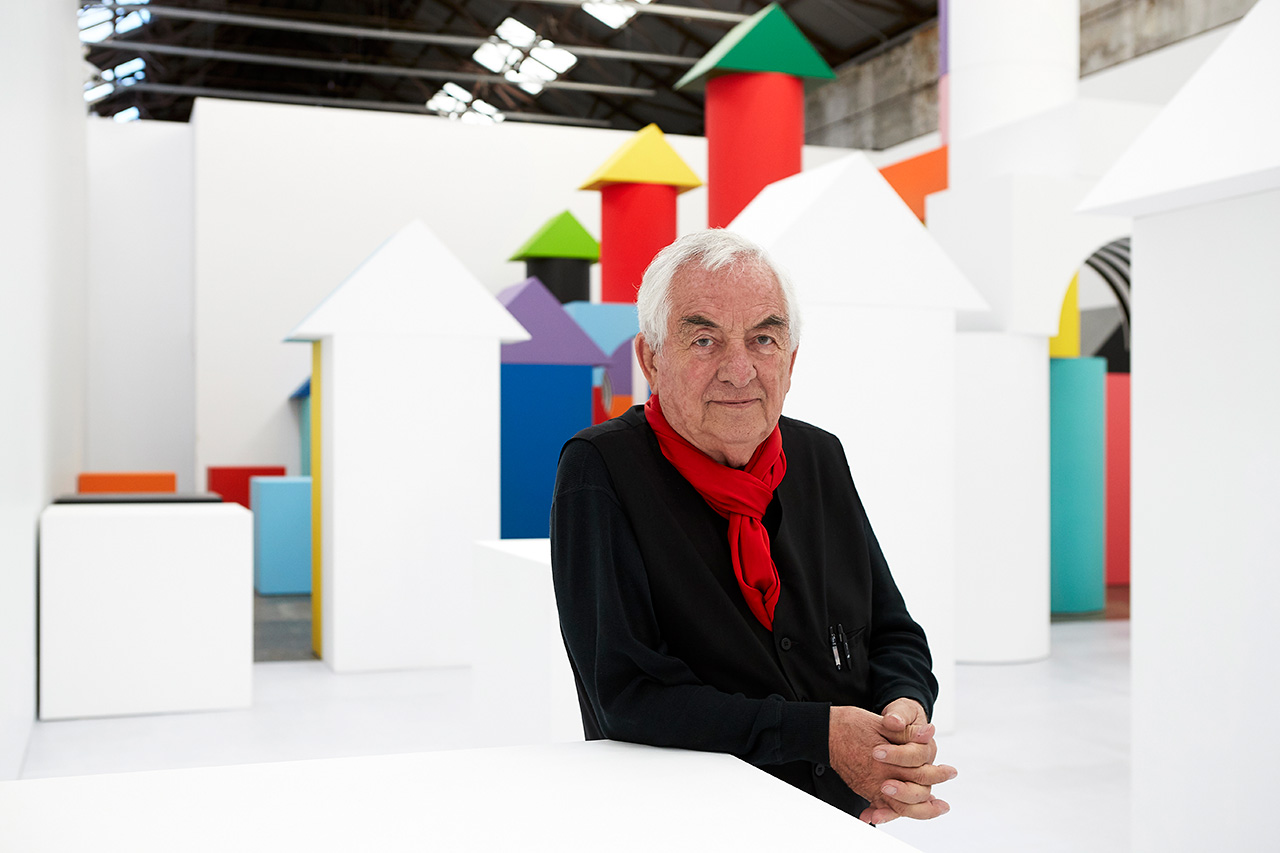 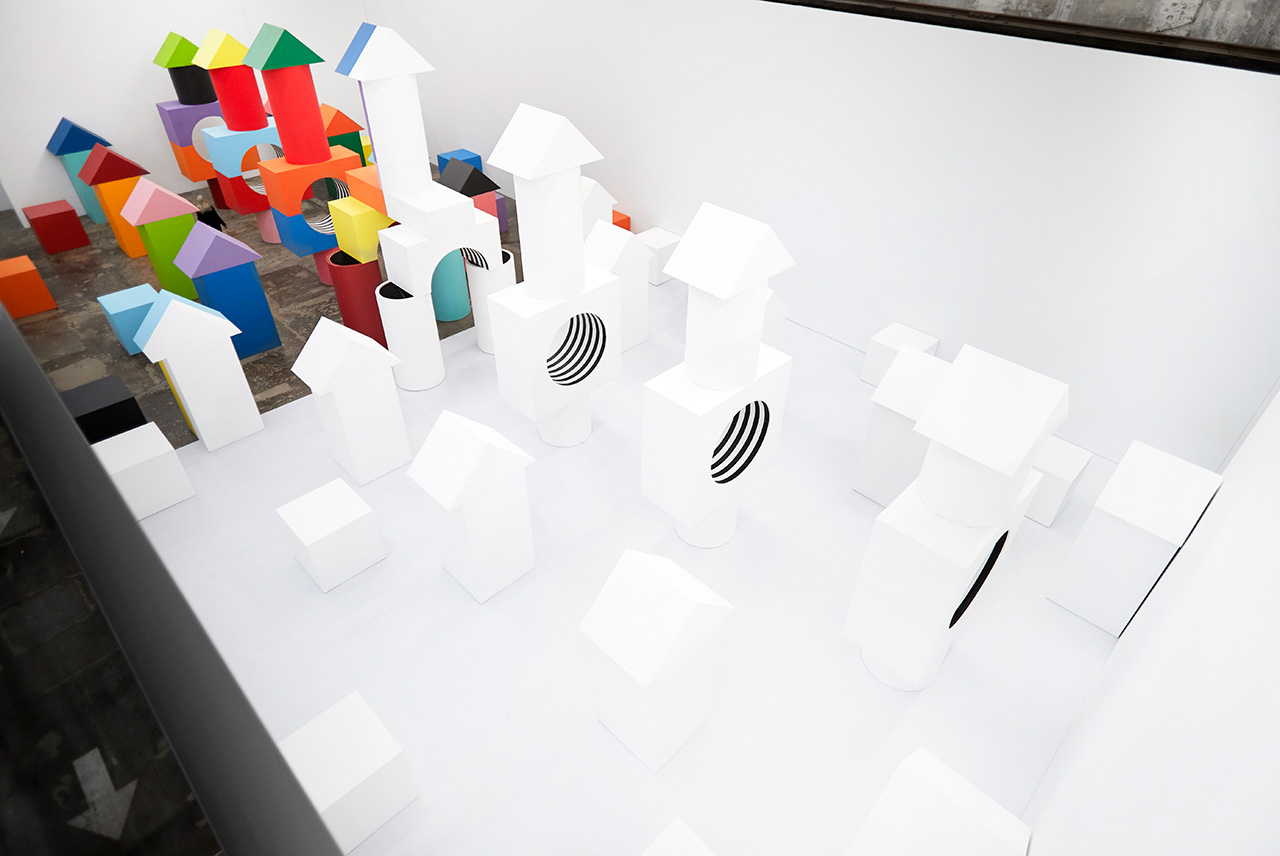 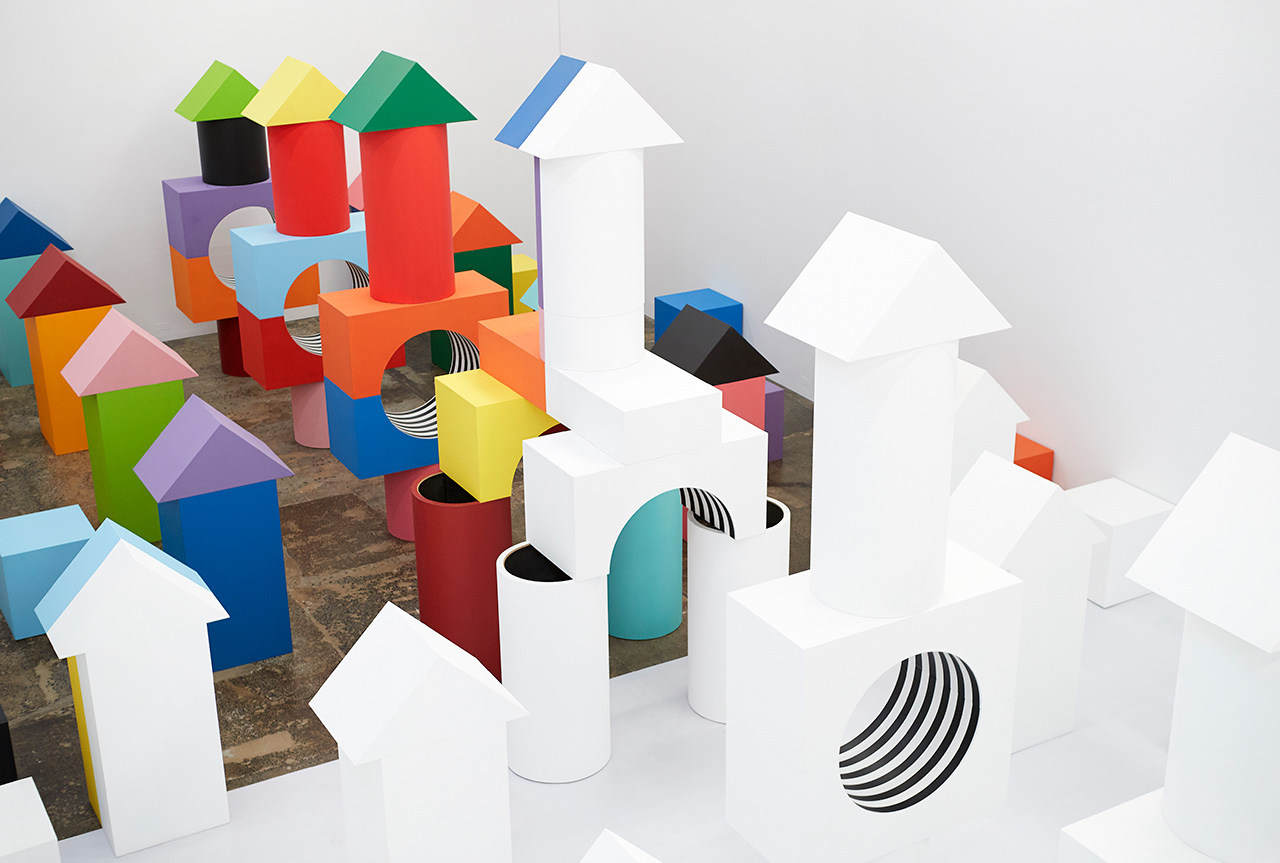 For over five decades, the French conceptual artist Daniel Buren has made a mark on the world that, while not entirely his own, could not be mistaken for anyone else’s.

In September 1965, Buren began creating the first of his works using the alternately white and coloured 8.7 centimetre-wide striped canvas that he first found in a market – the kind of motif that, for many, is as much an expression of classic Gallic esprit as the Tricolore itself. In the spirit of his Dada predecessors, Buren’s readymade stripes – borrowed as much from canvas street awnings as beachside cabanas or Breton striped shirts – were not only readily and easily adapted to any number of settings both in and outdoors, but they also gave voice to Buren’s interrogation of how an artist’s work should respond to, and manipulate, the world around it. In his stripes, Buren found what he called “a degree zero of painting”, a place where the work was so reduced as to have no value besides that which its location placed on it.

Three years later, in the days preceding the anarchic spring of 1968, Buren plastered two hundred of his striped posters around Paris, particularly in its institution-heavy Latin Quarter, in an attempt to challenge the assumed power structures of traditional art exhibitions spaces, the city’s hierarchical galleries and museums. By eliminating any trace of the artist’s hand, the politics of art institutions and by bringing his canvas straight to the street, Buren implored his contemporaries to regard the world anew. ‘Anyone could do this,’ he appeared to suggest, inadvertently invoking that most tired of tropes invariably levelled at conceptual art, ‘even a child.’

Over the years since, Buren has more than earned his stripes as one of the world’s most celebrated conceptual artists (named so for the centrality of ideas to his practice) – one whose work has greatly shaped the world around it, in both public and institutional settings. Perhaps you’ve taken a picture of yourself standing atop one of the 200 black and white striped, gradated marble columns that are dotted amidst the Palais Royal in Paris in a precise, equidistant grid? That’s a Buren work, his first public commission and his most controversial one, titled The Two Levels (Les Deux Plateau, 1985-86). Or perhaps you remember the kaleidoscopic, jewel tone filters that covered the glass sails of the Frank Gehry-designed Fondation Louis Vuitton two years ago? Also one of Buren’s works, and a spectacular one at that.

Spectacle unites these disparate works, sure, but they also share in Buren’s longstanding predilection for large-scale architectural interventions that manipulate our sense of scale, and along with it, the preexisting scaffold that our built environments provide to our experience of viewing art. Open now at Carriageworks in Sydney, Like Child’s Play (Comme Un Jeu d’Enfant, 2014) is another of Buren’s works that delights in its preoccupation with the spectacle of scale and its total inversion. Put simply, it is, in the words of the artist himself, “an enlarged replica of a game, or toys, like every kid in the world plays with one day.” Buren once played with the same toy blocks, as did his children, and it’s not too far a reach to venture that you too must’ve. “Everyone plays with [blocks like this]!” Buren told me at a preview of Like Child’s Play. “Sure, [I did], I never met any family kids who did not play with that, girls and boys. You don’t play with them in Australia!?” he adds playfully, with mock incredulity.

This is the fourth time that Buren, who was born in Boulogne-Billancourt, Paris, France in 1938, has exhibited the work internationally. It was first unveiled in France in 2014, then in Naples, Italy and in Mexico at the Museo Espacio before arriving here, and in each iteration of the work the configuration of its building block elements has been manipulated to suit the demands of the space. “I play with many possibilities, given what you see here,” says Buren, ushering at the vast white cube of Bay 21 that extends before him. “[The blocks] were never positioned in the same way. It is very, very different each time with the exact same elements. It is really part of the piece – this decision to play with the shapes and colour – to give a very strong visual impact […] with the same shapes, both totally white and coloured.”

Buren has filled the space he has been allotted at Carriageworks (“I did not choose the space, I accepted the space,” he demurs) with over 100 elemental shapes inspired by the work of the German educational theorist, Friedrich Wilhelm August Fröbel. The pedagogue, famously acknowledged as the founder of kindergartens, theorised that children learn best when they recreate their experience of the world through the act of play. “The shapes are taken from these games and they are very simple: cubes, rectangles, a little bridge, cylinders, triangles and that’s all,” says Buren. “With that, a kid is able to build a full city and follow [their] imagination. I was always interested in these toys, even if [it has] been a long time [since] I have played with [them]. [When I had] this idea to make something with [the shapes], I started again to play.”

When it came to extrapolating the work from a set of children’s blocks, Buren began first to play with the cube, he explains. The artist scaled its dimensions to one metre by one metre, and from that prototype he was able to calibrate the remaining shapes according to the same proportions. No one shape in Like Child’s Play measures less than half a metre at its smallest; conversely, nothing extends beyond two metres. Everything else registers at some interval in between. Stacked one atop the other, at its highest point, the work towers to seven metres in height – akin, exactly, to the height of the white walls that border Buren’s work.

The colours, too, are a faithful recreation of those featured in the original kit, and Buren remarks that there is “a repetition, more or less equal, between [the] bridges, cylinders, et cetera, of the 13 different colours, which were in the box [of] cubes.” Where Buren deviates from the stringent recreation of the original blocks is in the calculated division of the gallery space in precise halves between coloured blocks and those that the artist has recreated in stark white. Visitors to the space enter by way of this whitewashed portion of the installation before stepping into Buren’s city of colour, a precise mirror-image of its opponent half. “Everything in the space is cut in two,” says Buren. “We enter by the white and little by little we come to the colour and everyone can see an enormous difference – not to speak about the fact that it’s coloured or not – but even the perspective and feeling we have of the same elements,” Buren remarks of the distinction and its effect on the viewer. “[The blocks] seem either larger, or with more distance [between them than] the white, which is totally untrue. The placement [of the blocks is] absolutely symmetrical… From the middle we have [something] like a mirror. The elements are absolutely the same [everywhere] in the space. That’s the way it’s constructed and [that is] the principle of using these shapes.”

Recent works of Buren’s employ a similar mirroring effect, namely the fun-house mirrored entrance-floor atrium at the Museo MADRE in Naples, where Like Child’s Play was once exhibited. “I don’t want to exaggerate but you can almost that is [like] most of the work,” Buren reflects of his fondness for channelling parallel lines in the layout of his in situ works. “You certainly have, in a row, two or three works that are a variation [on a theme] but then you jump to something else. Then it’s very different kind of work. It all depends on the space – the key point is the space, it gives me some ideas.”

At Carriageworks, Buren has arranged his shapes to create sightlines that run uninterrupted from one end of the installation to the other. At the heart of the work is a series of towers, in the middle of which is a circular void that leads the eye through to the opposite wall and doubles as a surface onto which Buren has painted his signature stripe motif – the only other element of the work that betrays his singular hand. “The stripes are not in the toys,” he tells me with a chuckle, explaining that the more he worked on the piece, the more possibilities for different configurations revealed themselves to him. “I was thinking [of building] something where you have one hundred possibilities for a piece and one absolutely direct [line of sight] from one end to another, where you don’t see too much of the piece but you see a long view. To reinforce this as a direction, I put the stripes in this area.”

In all its iterations thus far, the through-line of the stripes is the only detail to remain unchanged in Like Child’s Play. Buren concedes, however, that he’s open to the possibility of changing it, saying he doesn’t want it to be “stuck forever” in the rigid confines that its previous exhibition dictates. When I ask what configuration he would like to experiment with next, Buren laughs. Perhaps it will be destroyed, he says.

Every element of Like Child’s Play will be dismantled next month, piece by piece, as though the blocks were still in their original format, which is how Buren says his team of five assembled this site-specific version in the first place. The show itself signifies Buren’s first time exhibiting solo in Australia; he first visited in 1979 for the third Biennale of Sydney, titled European Dialogue, for which he installed a series of stripes in the cornices of the contemporary galleries at the Art Gallery of New South Wales. He has returned several times since, including for a group show in Melbourne and for a competition he entered as part of the Sydney Olympics (and in which he was unsuccessful). I ask Buren if he has any concerns at the thought of children running through the work, potentially damaging or knocking over its precarious structures (as is their wont), and he issues a hearty laugh. “You would have to have very strong children, these are very heavy. The four cylinders are around two tonnes combined.” Perhaps we could be the ones to finally topple the work? “Australian sportif!”, giggles the 80-year-old artist, childlike, in reply.

Like Child’s Play will exhibit at Carriageworks until August 12. Entry is free, and the exhibition is open from 10am – 6pm daily. More information is available here.

Tile and cover image: Zan Wimberley/Courtesy of the artist and Carriageworks