"Nothing was too much"

Disney’s Cruella is finally here, and we’re beyond ready. Not just to experience the backstory of the infamous 101 Dalmatians character, or the amazing soundtrack, or the star-studded cast of Emma Stone and Emma Thompson – while those are all exciting elements, we’re actually stoked to be able to soak up a movie with fantastical hair and makeup looks again.

After a lengthy pause during the pandemic, Cruella marks the first major film we’ve seen with truly theatrical costuming in the year since – and boy, does it make up for all that lost time spent in our loungewear. As the film’s hair and makeup director Nadia Stacey reveals, the beauty looks were essentially an extra character in the movie.

Here Stacey details the inspiration, characterisation and hard work that went into each dazzling look.

On using beauty as a disguise

“The hair and makeup in Cruella is used as a tool of deception, as the character of Estella [played by Stone] has got to disguise herself from the Baroness [played by Thompson]. So when we first see her, it needs to be believable that she’s a girl that’s growing up in London and that she’s created this persona in Cruella. When she first starts arriving to these red carpet moments, there’s a mask-like quality to the makeup because she has to disguise who she is. This required the difference to be huge between the character’s two looks – I needed to keep Estella quite simple so that we had somewhere big to go for Cruella.”

On the characters’ striking makeup

“I wanted this very perfected, sculpted look for [the Baroness] with a ’50s reference. Naomi Donne came on as a hair and makeup artist for Emma Thompson, so I gave her my ideas and she then perfected her look. With Cruella, she’s experimenting and finding herself, testing and playing with things; there’s a kind of chaos to Cruella’s look. But with the Baroness, it’s very much figured out with completely clean, structured lines. It was fun to have two strong leading ladies to design for, with completely different looks.”

On those show-stopping wigs

“For Cruella, it was a real mash-up of looks. We did 18th century wigs with 1960s makeup, with complete creative freedom to go crazy – nothing was too much. In one scene, we had Cruella’s signature black-and-white hair being worn by every guest – there was about 120 wigs, so it was a huge operation to get them done, with a conveyor belt of people working on them to get them ready. I’d ordered one to get a prototype and I was looking at it and thinking something wasn’t right – the black and white was around the wrong way! I would panic in the middle of the night after that, because can you imagine if I’d ordered the 120 and they were around the wrong way on the day of shooting? But that was a fun day to be an extra, with punked-up Cruella hair.”

Cruella is released into australian cinemas on May 27. 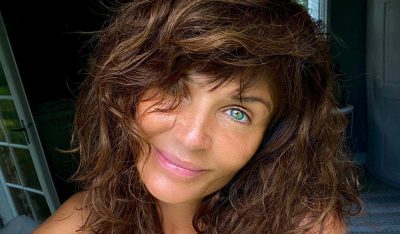 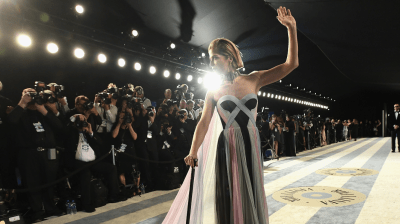