It’s been a huge year for designer Christopher John Rogers. Not only did Zendaya make history when she became the youngest woman to win best actress in a drama series wearing CJR, but the 2021 LVMH Prize finalist’ designs were also worn by our first Black Vice President Kamala Harris and RuPaul’s All Stars Season 5 winner Shea Couleé wore Christopher John Rogers for her virtual crowning. Plus, CJR is part of Target’s spring designer dress collective releasing the most size-inclusive range for the retailer yet. On Monday, May 5, the Metropolitan Museum of Art announced his works would be on view at the Costume Institute.

Following the Met Gala on September 13, beginning on September 18, CJR will be exhibited alongside the work of American designers of both past and present, in the forthcoming Met Costume Institute exhibition, “In America: A Lexicon of Fashion”. This will be a two-part show on view through September 5, 2022, exploring the modern vocabulary of American fashion. So often within the context of fashion history, curation and exhibition; contributions to the fashion cannon by Black designers are often overlooked (or celebrated posthumously, if at all). So this is a huge deal to have Rogers’ work celebrated now. Giving him his flowers for his sheer brilliance while he’s alive is major.

Now that we’ve got that out of the way, let’s talk about the gown, shall we?

This taffeta plaid ball gown debuted at his Fall/Winter 2020 show last September and speaks to the essence of what the brand is all about. Rogers’ work usually references and re-works classical design elements through a fresh lens. With its voluminous hoop underskirt, this piece is an ode to famed designer Charles James and classical French rococo gowns worn by the likes of Marie Antoinette but through a modern perspective with the use of pink plaid pattern. The dress is sculptural in its design and speaks to the technical skills of Rogers. 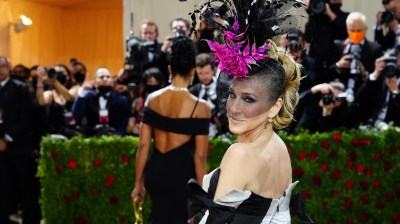