Selena Gomez has shown her support for Britney Spears on social media in recent weeks, but now she’s sent her fellow popstar a gift in the wake of her conservatorship battle. Spears shared that she woke up to a special delivery from the 28-year-old, which included a number of Gomez’s Rare Beauty products and a colourful swimsuit.

“Ok guys … great news !!! When I woke up I got a very cool box with a bikini in it 👙and my favorite three make up products from @SelenaGomez !!!!” Spears wrote on her Instagram page alongside a flat-lay image of the gifts. “Her shimmers are really fun and her spritz for your face before makeup is bomb and smells very good !!!!”

The package included Rare Beauty’s 4-in-1 Prime & Set Mist, Liquid Luminizer Highlight in the shade Mesemerize, and Illuminating Primer (which are set to finally land in Australia from next month). Gomez also included a tie-dye bikini from her new collection with La’Mariette, a swimwear brand founded by her bestie Theresa Mingus.

Spears was clearly touched at Gomez’s gesture and excited to use the products, writing, “Selena …. Thank you for surprising me with this gift … I’ve been looking for shimmers !!!!!!” Gomez responded to Spears’ post on social media, commenting, “This makes me so happy! I hope you enjoy it – love you so much.”

Spears has been very active on her social media accounts over the weekend, as she revels in recent wins in her conservatorship case. She most recently called out her father and sister Jamie Lynn and revealed she has “quit” music while she remains under the conservatorship. 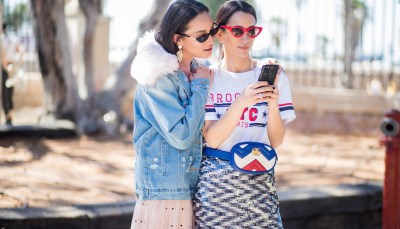 The GRAZIA Edit Of Afterpay Day Sales Worth Shopping

Neutral In Tone
Next page