For a Brit who flits between London, Los Angeles and the Big Apple, Alexa Chung sure knows how to channel Parisian style.

Still, that doesn’t stop her from poking fun at her lack of French roots and linguistics in this low-key but hilarious video (below), released to tease her Spring 2017 advertising campaign for brand AG Jeans, founded by Italian Adriano Goldschmied and based in California.

The three-minute clip, directed by AG’s global comms boss, Jonathon Crocker, shows Chung at her hilarious, kooky best – with an unexpected kicker that suggests she has a career as an actor ahead of her should being a style icon / designer / TV host loose its shine.

Chung has been tied to the brand since it invited her to guest design a capsule collection in Spring 2015. Channelling her signature brand of cool, vintage ’60s and ’70s-inspired style, it was a rapid sell-out. By the next season, she was the face of the brand. Looking at these images – shared exclusively with GRAZIA pre-release – it’s easy to see why. 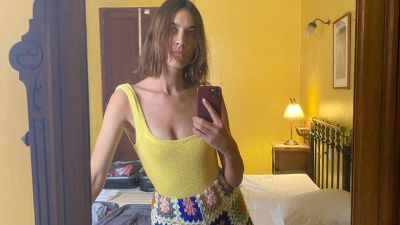