A baby Turner-Jonas is undoubtedly on the way

In February, news started circulating that everyone’s favourite couple, Sophie Turner and Joe Jonas, were expecting a baby. The pair remained silent, choosing not to comment on the speculation, but out on a quarantine walk yesterday, Turner debuted her bump sending the internet into a tailspin.

The Game Of Thrones actress and musician married in May 2019 with a surprise Las Vegas ceremony after the Billboard Music Awards, complete with the little white chapel, Elvis celebrant and ring pops as wedding bands.

Weeks later in June, the couple married during an official ceremony at a Chateau in the South of France. The affair was a far cry from the shotgun nuptials held in Sin City. Rather it was a celebration of elegant and grandiose proportions with several hundred guests (including Joe’s brother and sister-in-law Nick Jonas and Priyanka Chopra). Turner even wore a custom Nicholas Ghesquière for Louis Vuitton gown on the day. Made from tulle, silk gazar and lace, it comprised of over 650,000 stitches and almost 200,000 beads. It featured an open back, deep neckline and intricate detailing on the sleeves and skirt.

The married couple still haven’t “technically” confirmed the pregnancy, but a rough timeline estimate might make her around the 20-25 week mark. Either way, we’re thrilled for their growing family. 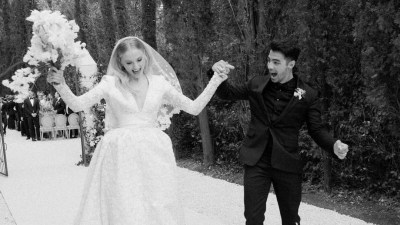