The Girl On The Train: What We Know So Far As the #1 New York Times Bestseller gets the film noir treatment in New York City, (with the beautiful Emily Blunt as its protagonist), if you haven’t read the skilful authorship of Paula Hawkin’s The Girl On The Train yet, consider this your three month warning. Because it really is enthralling, inescapable novel trickery at its best.

Thirty-something-year-old Rachel (Blunt) is unemployed. Her drinking problem and depression from her marriage breakdown has led her here and in a bid to keep these secrets from her housemate, Rachel travels into the city each day to convince her friend she’s working. As Friday afternoon rolls around, Rachel boards the train and sips on her premixed gin and tonics, a common ‘the weekend’s here’ ritual for passengers travelling to suburbs outside of London. “It’s Friday, so I don’t have to feel guilty about drinking on the train. TGIF. The fun starts here,” says Rachel.

Sober or otherwise, Rachel commutes via the same line every day and, unable to look at the house that her ex-husband Tom now shares with his new wife, Anna, and their daughter, she instead begins daydreaming about their neighbours; a perfect little couple known as Scott and Megan. One night though, something happens to Megan and Rachel is involved. There’s blood, there’s a man with red hair, there’s… not much memory, but a perfect starting point of a murder mystery that will keep you flicking pages til your eyes give in.

Just like a train, the narrative is stagnated and skilfully split between three women’s viewpoints of what happened; Rachel, Anna and Megan. And, with all the information we know from the film and the novel, GRAZIA’s Jessica and Sara try and piece together their own mystery: how will this film play out its ingenious plotline? And will the director, Tate Taylor, do one of our favourite books movie justice?

Jessica: I’m really interested in how the film will portray the unreliable narrator in Rachel.

She’s notoriously prone to passing out, drunk dialing and any revelation she begins to make, she turns to a bottle of gin and has a blackout.

Sara: This is the part I am most excited and nervous to see adapted on screen. I’m apprehensive because I want the film company to get it right and I’m scared they’ll brush over it. Not knowing who to trust (not even the narrator!) was the most intriguing and gripping part of the book for me. Rachel really is like that drunk friend, who you want to see succeed and do really well but you keep losing faith because they keep screwing it up.

Jessica: The book has different narrators. To me, it felt a little bit jolty, almost staccato-like and hard to track but was very effective in building the suspense by drawing out the murder plotline. I wonder if the film will follow suit and break the narration into Rachel, Anna and Megan.

Sara: Fingers crossed Taylor keeps this in. Reading the dynamics between these three women who didn’t even know each other personally was the magic of Hawkins so hopefully the studio can emulate it. CREDIT: Getty Images
Jessica: People are saying this film is like Gone Girl, but I disagree…

Sara:  I can understand why reviews are saying this but that comes down to the title and the fact that Gone Girl and The Girl On The Train are both adaptations from best selling books. Both are fantastic thrillers but, to me, the difference lies in the relationships. Gone Girl was a murder mystery but essentially at its heart was a story of the breakdown of a marriage and the break down in communication between a man and a woman. In The Girl On The Train, we see an exploration of very female specific relationships and those insecurities and struggles that all women can probably relate to.

Jessica: I think because Rachel has completely broken down and turned to alcohol as a result of a failed marriage, you really feel for her. You find yourself trying to empathise with her even when she catches the train into the city every day just so she doesn’t have to tell her housemate and best friend that she lost her job. As a reader, you almost become the fourth narrator to the novel, that is, a concerned friend to the heroine. The comparisons to Gone Girl probably explain why Hawkin’s didn’t name her book The Woman On The Train.

The book is set in London on the Tube but the film is set in New York on the Subway. Hawkins is from London and I think so much of who Rachel is – and the novel’s scenery – is English. Even the Friday afternoon drinks on the commute home.

Sara:  The author said herself that the story could essentially take place anywhere that has a train (though that was probably after she received her first cheque for the rights to the film!) But I have to agree, it just feels English to me, particularly the cheeky after-work drinks in the carriage.

Jessica: Taylor has said he likes the re-location to New York as he believes this exacerbates Rachel’s loneliness and drives home her broken character more which is a very good point. But, in New York City, the subway is mostly underground. You can’t see the countryside like the English trains. I do feel like though, as we see in Walter Mitty, there is an outside subway in New York.

Sara: The subway comes above ground at 125th Street in Harlem. Or Queens. Perhaps Rachel is staring into an apartment rather than a backyard.

Jessica: Justin Theroux will play Rachel’s ex-husband Tom. After seeing him in The Leftovers, I think this is perfect casting!

Sara:  I haven’t seen him much but he definitely has that charming-but-sinister thing down.

Jessica: What do you think of Emily Blunt being cast as Rachel? Some of the first look images make her look too little and too pretty to be that character! She is pregnant on-set at the moment though so her baby weight could work in her character’s favour!

Sara: I love Blunt. I think she’s perfect for the part in terms of style and ability. She is going to nail it. But I agree, a big part of Rachel is her own self-consciousness and lack of self-esteem. I have to wonder how they’re going to make someone as gorgeous as Emily look dumpy and dowdy!

Jessica: There is something incredibly heartbreaking about Rachel. It’s not so much the hopelessness of the drinking as it is about the reasons why she does it. She sees herself as worthless for not being able to have a child. The essence of this story is exactly that, a woman’s demise into alcoholism because of the guilt she feels by not being able to conceive.

Sara: This is the most heartbreaking part of the book, reading about a woman who feels her body has failed her and shattering her life in the process. I cannot wait to see this explored on film.

topics: screen, The Girl on the Train, Emily Blunt 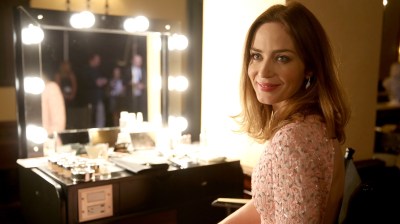