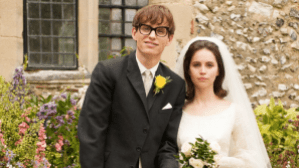 The Theory Of Everything was the incredible film starring Eddie Redmayne and Felicity Jones which told the story of Stephen Hawking, the famous physicist who battled motor neuron disease. At the heart of the 2014 movie was the 30-year love story between Stephen and his wife Jane but the latter has now slammed the producers for “galling” errors and a “fair amount of fanciful fiction.”

While the film was based on her memoir Travelling To Infinity, Jane says she complained numerous times to producers about the inaccuracies in the biographical details but was largely ignored. “I knew if there were mistakes in the film that they were going to be immortalised, which they have been,” she said, according to The Sun. “I found that very irritating and I didn’t want it to happen. Don’t ever believe what you see in films.”

Jane says she and Stephen first met in their home town of St Albans, not at Cambridge University like the film chronicles. She also said she and Stephen spent so many years flying around the world to attend scientific conferences but this was cut out of the film entirely in a bid to cut down running time. She also wished her parents were a part of the plot line as they were a huge help to her as she cared for her sick husband and their three children.

Jane said while Stephen wished there was a little more science in the movie, he was quite happy with the end product.

Speaking at the Henry Literary Festival in the U.K. as she promoted her second book Cry To Dream Again on Monday she said “Stephen was given two years to live in 1963 and he fought that wretched disease until this year. It was as if a giant had been felled and taken, and we thought he was immortal. I think that goes for all of us.”

Jane and Stephen divorced in 1995 when he left Jane for his carer. He passed away in March 2018.