Late last month Netflix quietly released the new Shania Twain documentary Not Just A Girl to a tepid reception. NME and Common Sense Media rated it just three out of five stars, similarly citing that it was predictable and was strung together with archival imagery. Despite an absence of rave reviews, it did shed light on the transformative years of the beloved singer. Perhaps most interesting was the recollection of her explosive divorce from Robert John (Mutt) Lange’s divorce.

Twain likens the divorce to the car crash that killed her parents at the age of 22. “It was like a death,” she said. “It was a permanent end to so many facets of my life. It took a long time to be ready to write and record again.”

For the unacquainted, Twain and Lange, a famous South African rock music producer, met in 1993. They struck a close friendship with property manager Marie-Anne Thébaud and her husband Frédéric Thébaud around the same time. In 2008 Twain and Lange shockingly split after 14 years of marriage. According to the “Man! I Feel Like A Woman” star, she hadn’t known why the producer left her.

A day later Frédéric told Twain it was because Marie-Anne was having an affair with her former husband. In a 2011 interview with Ellen Degeneres Twain revealed she didn’t believe him at the time but when she went to confront Marie-Anne, the manager denied any wrong doing before swiftly changing her number.

“In that search to determine what was causing this lack of control with my voice and this change in my voice, I was facing a divorce,” she adds in the documentary. “My husband leaves me for another woman. Now I’m at a whole other low and I just don’t see any point in going on with a music career.”

It turns out there was proof of the affair according to Twain’s 2011 memoir. In the same year, Frédéric and Twain who had both been cheated on, married. Twain was also battling with Lyme disease and hadn’t performed in nearly 10 years before she launched a Las Vegas residency in 2014 and released an album in 2015.

“It took a long time to be ready to write and record again. I was afraid to get back into the studio without Mutt, so it was really more about taking independence for myself and it was an exercise of saying ‘okay, look, you can’t just not ever make music again because you don’t have Mutt. You’ve gotta just dive in’ and I was petrified, I really was,” she said. 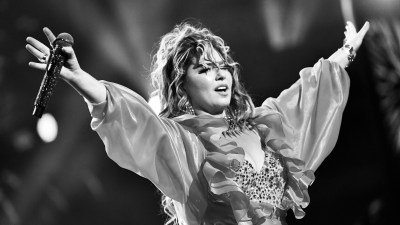