The country icon says she has written songs for Post Malone

The best part about Sunday night’s American Music Awards was not Shania Twain performing a medley of her hits – but rather Post Malone in a complete euphoric state enjoying them. Yes, the 24-year-old inked-up musician was seen dancing, drink in hand, to Twain belting out “Man, I Feel Like A Woman” at thr Microsoft Theatre in Los Angeles. It was, as this meme describes, a mood.

Here’s the performance in case you missed it. Twain literally had everyone in the theatre on their feet.

Now, Twain has come to the table with an offer. “I’ve written a song for us already,” 54-year-old Twain told The Talk hosts on Wednesday. “He doesn’t know it yet. He knows now. So Post, I have a song for us.” But Malone is not the only beneficiary of this kind gesture. Twain said she was so moved by meeting Lizzo and Janelle Monáe at the AMAs that she went home and wrote a song to sing with them as well.

“I went home and I actually wrote a song for the three of us. It’s called ‘Sisters’ and I think we are all sisters in what we do, and it was a really great new friendship that we started. And so I went home and wrote that song. They don’t know about it yet.”

The only thing better than Malone, Monáe and Lizzo joining Twain at one of her Vegas shows… is Celine Dion joining in on the action as well. A Dion and Twain collab is surely every 90s kids’ music dream. That is, if Twain can fit all of this in in between easting wine and cheese with Taylor Swift. See below. 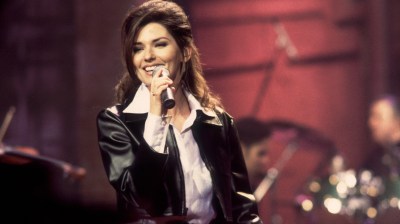