Rihanna announces velvet version of her Fenty Creeper for Puma As further proof of Rihanna’s love for this season’s velvet footwear trend, the singer has just announced she’ll be dropping a new version of her cult Fenty Creeper in the hot (but lets face it, probably impractical) fabric next month.

Given the focus of her Fenty by Rihanna x Puma Spring/Summer 2017 fashion show at the opulent Hotel Salomon de Rothschild during Paris Fashion Week were rich fabrics and footwear, a collision of the two was probably par for the course. The new velvet version follows a more masculine-looking orange camouflage print released just months ago that caused a stampede-like sell-out within 24 hours (the style has since been re-released and is available via the online Puma store in men’s sizes). Similar levels of hype and hysteria have surrounded flat-colour versions drops of the chunky-soled trainer that’s quickly become the hero product of Rihanna’s runaway success #FentyxPuma collaboration.

See every look in the Fenty by Rihanna x Puma SS17 runway show. The news coincides with the release this week of a second collaboration collection between the star and with luxury shoe god Manolo Blahnik, this time trading the denim-fabrics of their last range for fur and leather styles inspired by classic Timberland boots. The Fenty Puma Velvet Creepers will drop online and in stores globally on December 8 in three colours – black, burgundy and grey – and will cost around $200. Set your outlook calendar now if you’re excited. History suggests these will be gone in a heartbeat too.

Now, if she could just release a velvet version of those furry slides Gigi Hadid loves so much, our lives will be complete. 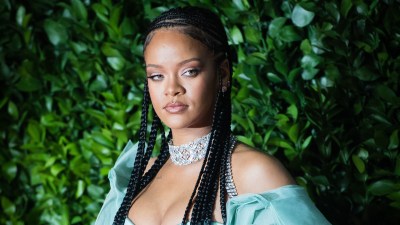