If You Long For More Exciting Times…

Naoise Dolan’s funny, smart debut novel paints a world in which you can’t help but get immersed

Our current reality – quite apart from being dystopian and scary – isn’t exactly fertile ground for variety and excitement.  We’re limited in what we can do, who we can see and where we can go.  In times like these, the best thing books can offer is escapism – the opportunity to inhabit a different place and a different life.  To step away from our own bodies and out of our own heads for a little while.

I think the blend of circumstances making up life at this particular moment led me to love Exciting Times, Naoise Dolan’s debut novel, even more than I would have if I’d picked it up in more normal times.  My immersion in it from page one calmed my frayed nerves and was a balm for my tattered attention span.  It transported me away from my own modest routine into the glitzy newness of arriving in Hong Kong as a young expat (a term Dolan doesn’t like, because it just means ‘you’re white, of course – and more welcome as a result’; this perceptiveness to her surroundings and cultural context pervades the book, and is one of the best things about it).  For the past couple of days, I’ve clung to this book like a security blanket. 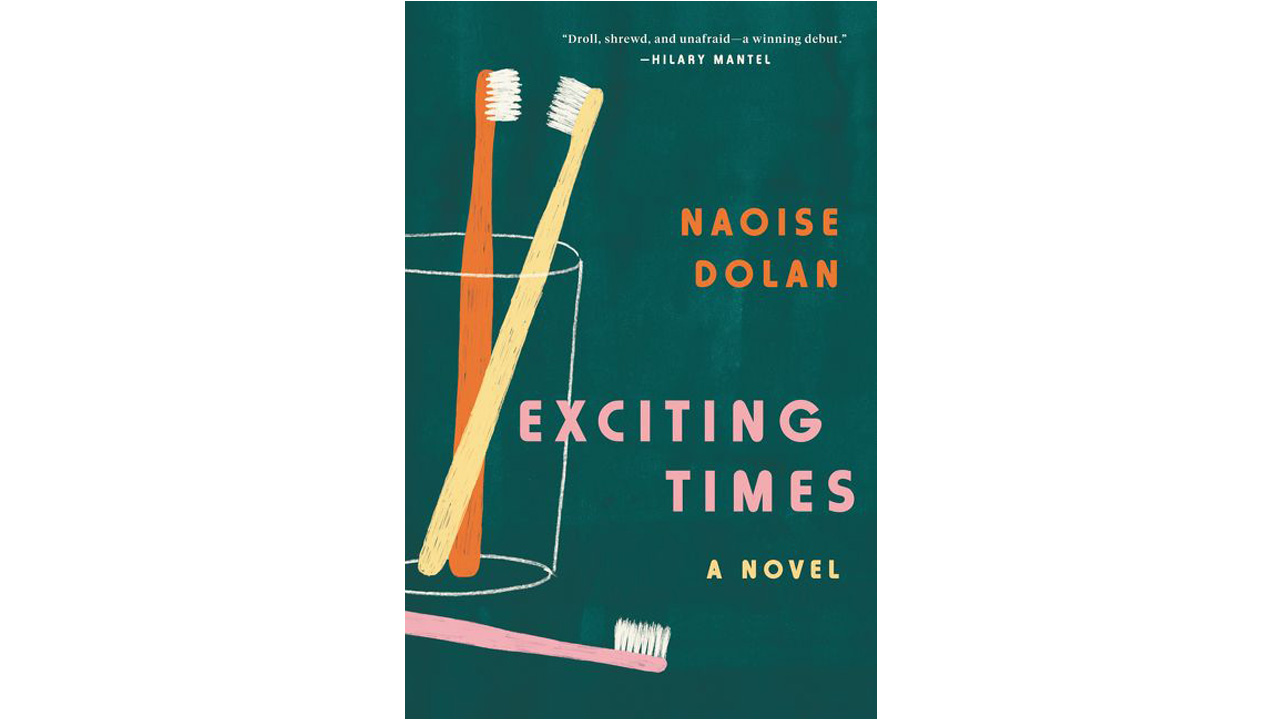 The key story arc is a love triangle (although something about that description doesn’t feel quite right – it’s too simple to capture the nuance with which the dynamic is drawn out).  The triangle’s central point is Ava, who has moved to Hong Kong from Ireland to teach English.  She becomes romantically involved, first, with Julian, an Eton and Oxford-educated investment banker; and then with Edith, a Cambridge-educated lawyer who grew up between Hong Kong and boarding school in the UK.

There is something coldly gripping about Ava’s relationship with Julian.  They start sleeping together only after hanging out platonically for a while, because Julian ‘didn’t want to impose’.  Not too long after this, Ava moves from her roach-infested Airbnb into Julian’s large and comfortable, if sterile, apartment.  She doesn’t pay rent, and he buys her things.  Ava is very interrogative of the power dynamics of this arrangement, which creates fertile ground for unpicking issues like class, wealth and gender.  She speaks of these things matter-of-factly: ‘Our wealth disparity was too wide to make me uncomfortable.  It was a clownish level of difference that I could regard only with amusement.  I also felt it absolved me of any need to probe the gendered implications of letting him pay for everything.’

There is a power imbalance – both tangibly, in that Ava lives in Julian’s apartment, and emotionally, in that she feels more for him that he appears to feel for her.  Ava presses this dynamic like a bruise, only hurting herself in doing so.  She leans into caustic, witty banter, hoping to get the upper hand in their relationship.  She likes to imagine he has a secret wife, because this ‘would make me a powerful person who could ruin his life.  It would also provide an acceptable reason he did not want us to get too close.’  She says things like, ‘I wasn’t good at most things but I was good at men, and Julian was the richest man I’d ever been good at,’ as though to convince herself it’s all a game.

Where Ava’s relationship with Julian is jarring, her relationship with Edith is sweet.  It creeps up on you; it’s tentative and kind.  Edith is practical and affectionate.  She gets excited about things.  Everything about her is present on the surface.  She buys Ava gifts and flowers, in a way that feels intuitively different to Julian’s habit of paying for things, because it’s thoughtful and personal.  She introduces Ava to her family after they’ve been dating a month: ‘The fact that ‘over a month’ brought Edith and me into meeting-the-family territory, whereas I’d known Julian for months before he’d even mentioned Miles, told me all I needed to know about dating gay women versus straight men.’  Edith comes along at just the right time – while it was intriguing to watch the relationship between Ava and Julian unfold, it’s not the sort of thing you could watch for too long.  Edith’s appearance in the story is a breath of fresh air, which shows something important about love – that it needs vulnerability to thrive.

My favourite thing about the book is its sense of humour and perceptiveness of character.  Even its minor cast is painted with shrewdness and wit.  One of Julian’s friends, ‘Ralph, pronounced “Rafe”… voted for Brexit to have tighter borders, and was applying for an Irish passport to avoid being stopped at them.’  Ava’s boss at the school where she teaches ‘wore a baseball cap backwards, either to look like he loved working with kids or to stress that he was his own boss, and dressed to please no one, not even himself.’

The fact that so many of these observations are directed at the habits of Julian’s and Edith’s wealthy, privileged friends, aligns this book with the tradition (seen anywhere from The Great Gatsby to The Secret History to Crazy Rich Asians) of placing a perceptive outsider among a group of elites – facilitating commentary from the trenches on how soulless or bizarre or extra they all are.  Ava isn’t really taken in by this scene – she is far less interested in Julian’s and Edith’s friends than she is in Julian and Edith – lending her social commentary a level of aloofness.  It’s fun to watch the story unfold from this vantage point – it makes you feel like you’re in on the joke, peering through the looking glass along with her.

The coolness used to describe others is contrasted by the intimacy of a series of texts, which Ava writes (first to Julian, and then to Edith) but doesn’t have the nerve to send.  These draft messages become the only place in the story where she expresses her deepest feelings.  While as narrator, she remains droll and impassive, preferring to deadpan than show vulnerability, in the private world of her own phone, she tells us how she really feels.  Social media use is threaded throughout the story – the book excerpts text messages, discusses the delicacy of viewing an ex’s Instagram stories and interrogates what social media posts say about the poster – giving it a modern feel.  In a way, this is a tale as old as time – one about love and loneliness – but its perspective, and the way it’s told, is fresh and unique.  This is what makes the book so impossible to put down.

Hermès In-House Perfumer Christine Nagel On Scent, Creativity And The Famous Fragrances That Shaped Her
Next page