The pandemic is doing weird things to us, emotionally speaking, which perhaps explains why I found myself unexpectedly reduced to tears while watching Ganni’s brilliant, innovative unveiling of their fall winter 2021 collection this morning. The Danish brand—who have built a loyal legion of international fans known as #GanniGirls with their eclectic, playful aesthetic and accessible pricepoint—forwent the usual live-streamed runway show in favour of a BBC Live Lounge-style live music event, tapping emerging musical talent to perform micro-sets while wearing new-season pieces.

The buzzy R&B artist Zsela—her debut EP Ache of Victory was released last April, produced by Daniel Aged whose client roster includes Frank Ocean and FKA Twigs—opened proceedings with a dreamy cover of Sinead O’Connor’s ‘Nothing Compares 2 U’ before launching into her own emotional ballad ‘Drinking’. She wore a ribbed cardigan with statement buttons and a Peter Pan collar—quintessential Ganni—with cargo pant-style white patchwork jeans and heavy lug-soled loafer. Then it was onto Deb Never—the hard-to-pin-down Los Angeles-based singer-songwriter whose chosen genre fluctuates between grunge, post-punk, and ’emo-rap’ and who featured on Brockhampton’s last album. Never wore a slouchy pinstripe suit and high-top sneakers to bash out ‘Someone Else’ and debut her new track, ‘Sorry’. Finally the Danish soul singer Coco O—a formidable talent who has worked with Erykah Badu and Tyler The Creator—rounded out the show, wearing an apple green mod dress for a cover of the late ’90s synth-pop track ‘You’re Not Alone’ by Olive.

It was during Never’s set that I briefly teared up—reminded, suddenly, of just how much I have missed live music. This last year has been a strange dichotomy, both painfully slow and moving at breakneck speed—and within that time warp it felt like a sensible survival tactic not to dwell too muvh on the many experiences we were missing out on. This is what made Ganni’s event so timely—and a further example of creative directors Nicolaj and Ditte Reffstrup’s uncanny ability to intuit what their audience is craving. Right now doesn’t necessarily feel like the right time for a runway, but it does feel like the right time to celebrate artistry, and the marriage the Reffstrup’s sartorial creativity with the unbridled catharsis inherent in all live music was a stroke of genius, and a brilliant way to kick off of the new fashion season.

As for the clothes themselves (a full lookbook was later released), Ganni stuck to what they do best, riffing on tried-and-tested silhouettes, updating them in new prints and colourways. Standout pieces included a patchwork silk shirt with exaggerated cuff sleeves, an oversized green felt blazer, and metallic-lacquered denim separates, while the quilted mini shorts, shrunken knitted vests, and chunky rubber boots are sure to make for compelling Instagram fodder over the next six months. Alongside the fall winter collection, Ganni also unveiled a limited-edition collection of rock ‘n’ roll-inspired creations, upcycled by Danish costume designer Nanna Bernholm using the brand’s old season deadstock. The pieces are campy and fabulous—deconstructed denim jackets, outrageous embellished flared jeans, and sleeveless leather vests, studded and featuring the ‘cone bra’ championed by Madonna and Jean Paul Gaulthier in the ’80s. Rather than sell the bespoke pieces, they’ll be available to rent at Ganni Repeat.

In short? In a moment where customers are demanding environmental sensitivity and cultural innovation, the team at Ganni delivered in droves. See the best looks from both the FW’21 and ‘Performance’ capsule collections below. 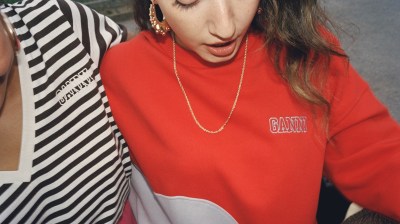 Join The Klub: GANNI Launches Athleisure Made For Much More Than The Gym