Direct from Paris, GRAZIA boards the original Orient Express - and the Oscar-winning costume designer behind the film "Murder On The Orient Express" reveals the sartorial clues you might have missed

Along with a cleverly concealed murder, an impressive moustache on one Monsieur Poirot and a heavyweight ensemble that includes Michelle Pfeiffer, Johnny Depp and Penelope Cruz, one of the most impressive things about Kenneth Branagh’s 2017 film adaptation of Agatha Christie’s 1934 mystery novel, Murder on the Orient Express, is the costumes. Characters in and of themselves, they both define and whisper clues about the people they clothe, with details woven into the cloth of each carefully-constructed garment. In celebrating the release of the film on DVD/Bluray, GRAZIA was invited on board the original 1930s Orient Express train for a commute from Paris to Reims and a journey through the ages.

Murder on the Orient Express is out today on Blu-ray, DVD & Digital. Get it here on iTunes and here on Google Play.

Zipping through Paris on the Orient Express is the kind of grand, exceptional affair marked by curious onlookers reaching desperately for their camera phones. And if you are lucky enough to be on the inside of the train, you’re doing the same thing. “It’s stunning. You do feel incredibly special walking on to this train,” explains James Pritchard, the great-grandson of Agatha Christie who is on board for the journey. “You look around at the details and it gives you a buzz,” he explains. Of his great-grandmother, Pritchard describes, “Her first trip on this train was 1926 or 1927. She went on this train on her own which, at the time, was not the done thing for women. That, to me, is extraordinary.”

Originally servicing the route between Paris and Istanbul, the train captures the glamour, romance and nostalgia of the Golden Age of travel. The original features and fixings have been retained with luxurious interiors in warm, patrician hues and design cues true to the Art Deco period in which it was originally constructed. There are plush, velveteen furnishings, damask silk curtains in powder blue, glass details finished in silver dust and original Lalique crystal panels. Carriages are segregated into lounges, accommodation, dining and bar, each more ornate than the last. “We recovered all the details from the 1920s, when all these cars were created,” explains Edouard Vapperau, the event manager for the Orient Express. “All the fabric that you see now was made from the original plans and from the same factories that first made them.”

Given that director Kenneth Brannagh worked with 70mm, high-definition film, attention to detail was as paramount to the overall story as it was to his character, detective Poirot. On 70mm, the audience can see details as fine as fabric texture and embellishment, which meant Oscar-winning costume designer Alexandra Byrne had her work cut out for her.

Byrne, whose filmography includes working with the likes of Cate Blanchett in Elizabeth, Johnny Depp in Finding Neverland, Chris Hemsworth in Thor and Scarlett Johansson in Avengers: Age of Ultron, was charged with the tricky task of interpreting not only the vision of Christie, but that of Brannagh’s. Add to that, the complex personalities of characters Christie constructed whose looks were entirely at odds with their internal monologues and intentions and you have quite a sartorial mystery to solve.

Being that costumes are so instrumental to an actor’s performance, oftentimes acting as an extension of them, I ask Byrne how collaborative the process is. “Hugely,” Byrne explains.

“Everybody asks me what happens when the actor doesn’t like the costume – but you don’t even begin to get to that stage.”

“I do all the research, I watch films, I look at photographs, I distill it all into mood boards and then it’s more about the characters and storytelling – and they’re a very good point for discussion.” For accuracy, Byrne visited vintage fairs and bought antique garments, opening up their seam allowances and buying original fabric sample books to perceive original colours that hadn’t been faded by sun exposure in the years since. “In collaboration with these characters, I did a timeline with who they really are, so we can keep up with who they are pretending to be. Then, because it’s the 1930s, there are original clothes. So you can pull in pieces from that era and try them on. Everything you put on an actor begins to tell them something, tell me something – it’s a constant dialogue.”

“Everybody is collaborative. Even though Penelope Cruz was filming another film abroad, I’ve worked with her before (Captain Corelli’s Mandolin), so I sent her mood boards and we did phone calls.”

Byrne explains Brannagh’s vision as being true to the period whilst possessing a sense of modernity. With this in mind, she offered a run-down of the choices she made for each character. “[Poirot’s] sense of vanity is through precision and tailoring rather than peacocking. He was obsessed with symmetry so the tie knot had to be symmetrical and carefully frame that huge moustache.” Motioning to a more modest look, Byrne describes an outfit made for actress Daisy Ridley’s character, Mary Debenhem. Ridley had a wool allergy and so special care was taken with her tweed suits. “I think she’s the closest to Agatha Christie: she’s an English rose, she’s a governess, she’s an independent woman supporting herself financially. Here, she is wearing the skirt from her travelling suit, the train at this point has already crashed into the avalanche, and the carriage has holes so she’s having to pull things out of her suitcase to keep warm, its not a coordinated look – she wouldn’t have enough clothes to do that.”

For Michelle Pfeiffer’s turn as celebrated Broadway actress Linda Arden-cum-onboard-persona-Caroline Hubbard, Byrne looked to the original character descriptions. “Christie writes about her beautifully, saying that you can hear her coming before she enters the room. So, Michelle and I worked on trying to create this woman who is a bit too much but without it being comedic,” she offers. “So for her arrival on the train, we had the big coat over the shoulders that she annoyingly dragged over the aisle knocking people as she walked, giving her scale; There’s a bit too much jewellery, too many handbags. We need to know her, we need to understand her. We need to like her but equally, by the end of the film, we need to be able to backtrack and understand how and why she did everything she did.” 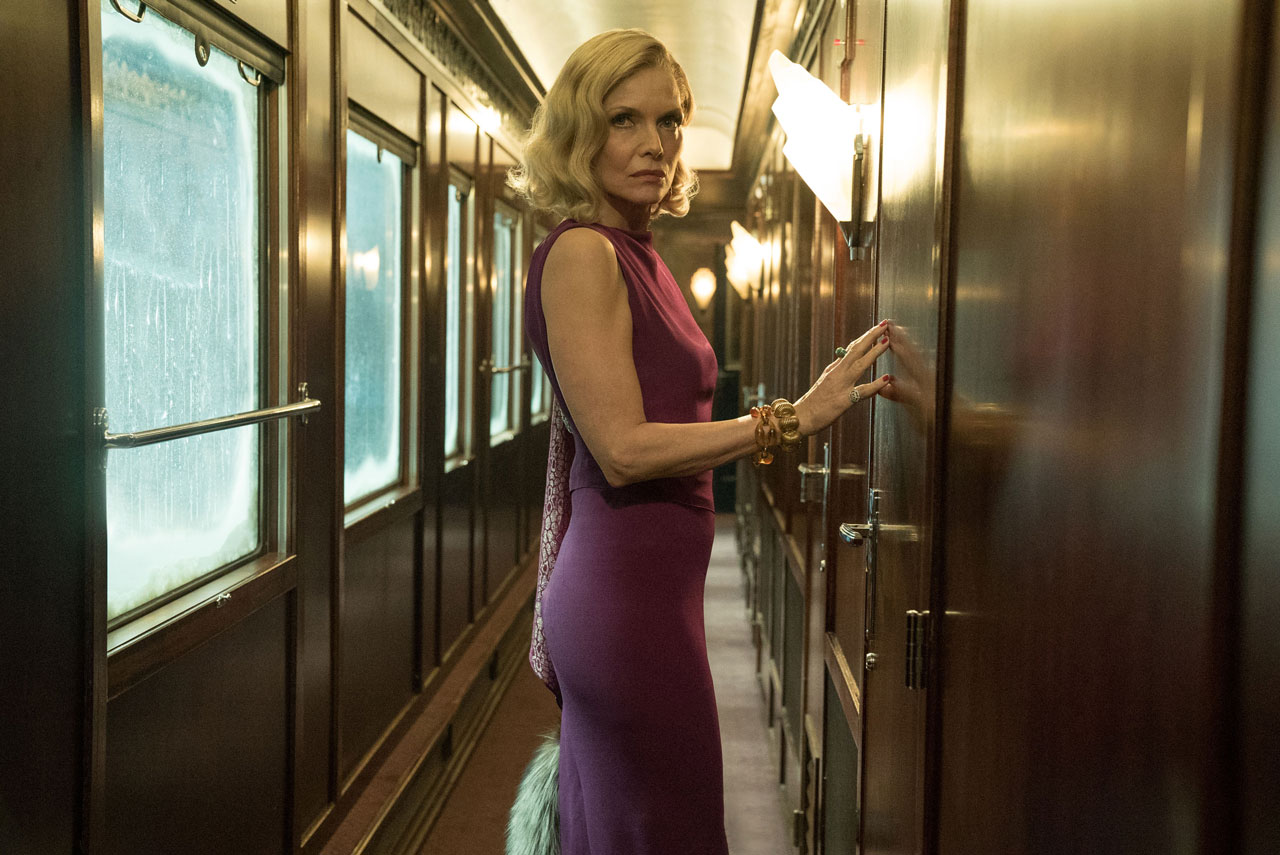 Up close, it is at once ostentatious and entirely fabulous, the detail a work of art. Though I can’t speak for Pfeiffer’s murderess character Linda Arden, I’d kill for a wardrobe such as hers.

Murder on the Orient Express is out today on Blu-ray, DVD & Digital. Get it here on iTunes and here on Google Play.