The in-demand 22-year-old has created four limited edition T-shirts for iconic brand BONDS featuring her photography, graphic design and poems intended to capture the spirit of summer in Australia. All made from “100 percent home grown Aussie cotton”, the boxy, heritage-style tees come in black, white, long and cropped varieties.

She may have been born in Egypt, but few would know more about the intersection of Aussie beach culture and fashion than Elashiry. Having regularly featured in surf- and swim-campaigns in the past, and being a constant traveller up and down the country’s east coast, the sun-chasing social media star had plenty of personal experience to draw on for her shirt designs.

“Picking the four images for this project [from my photo library] was actually quite easy,” she told GRAZIA. “I’d just spent the summer in Australia galavanting up and down the coast and shooting on my trusty Contax T2. I already knew my favourite shots from the season since I’d been collecting them to share on [my Instagram creative platform] @35mimimeter.

“I then picked images that either had lots of colour and not much detail, or lots of detail and no colour, so that the collages could be busy without taking away from the images,” continued Elashiry, who famously prefers to shoot on ‘old fashioned’ film rather than a digital camera.

“I always loved film photography, even before the days of Instagram, and I’m not a fan of sitting and doing the post/editing process on digital images either. I’d rather capture a moment in time that’s often so brief there’s no time for fiddling with settings and focus.”

There was nothing brief about the method she used to create the collage artworks on her tees, though.

“I used fashion magazines my boyfriend [fashion photographer Nick Tsindos] had pulled pages from, then proceeded to cut up any colour, writing or images I liked into tiny slithers. I then lay my printed photos out on a table and placed a collage piece onto a photo each time I walked past, rather than sitting trying to put together an insolvable puzzle with a million possible combinations in one go. Then, over two or three days, all four collages were created.”

The Mimi Elashiry x BONDS Limited Edition Tee collection is available now in select stores and online, starting at $35. Read on for a close-up of the four T-shirts, along with the short poem their creator wrote to explain each artwork. 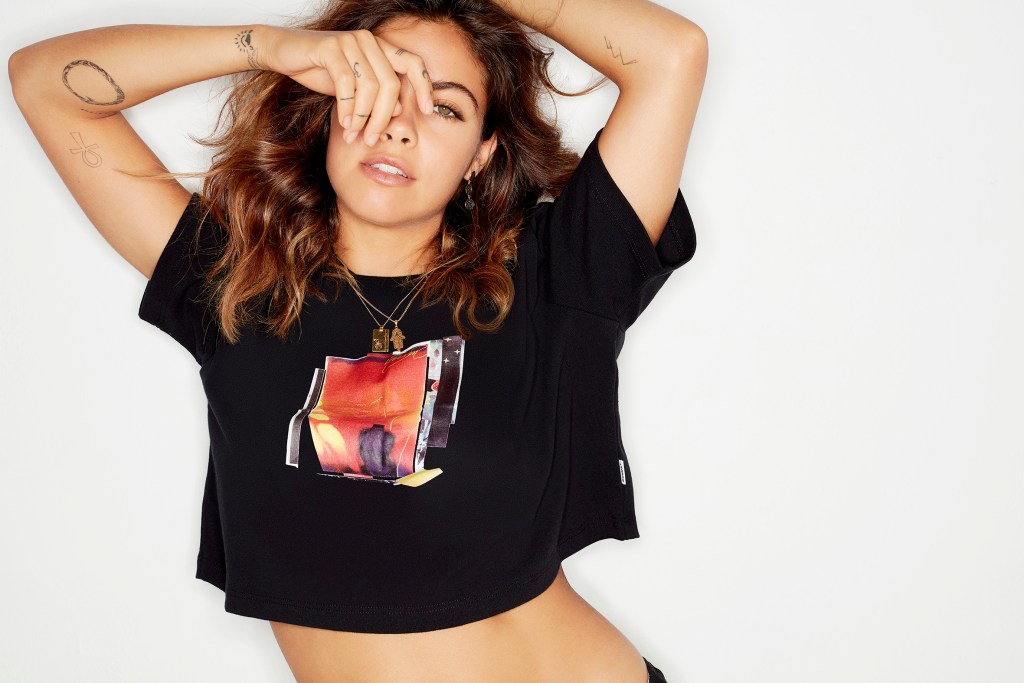 You lie on the beach, belly up, no need to run.

You see swirls of yellow, red, but…

Dream where are you? There you will find what is waiting, changing, growing, burning for you.

By you – under the summer sun. 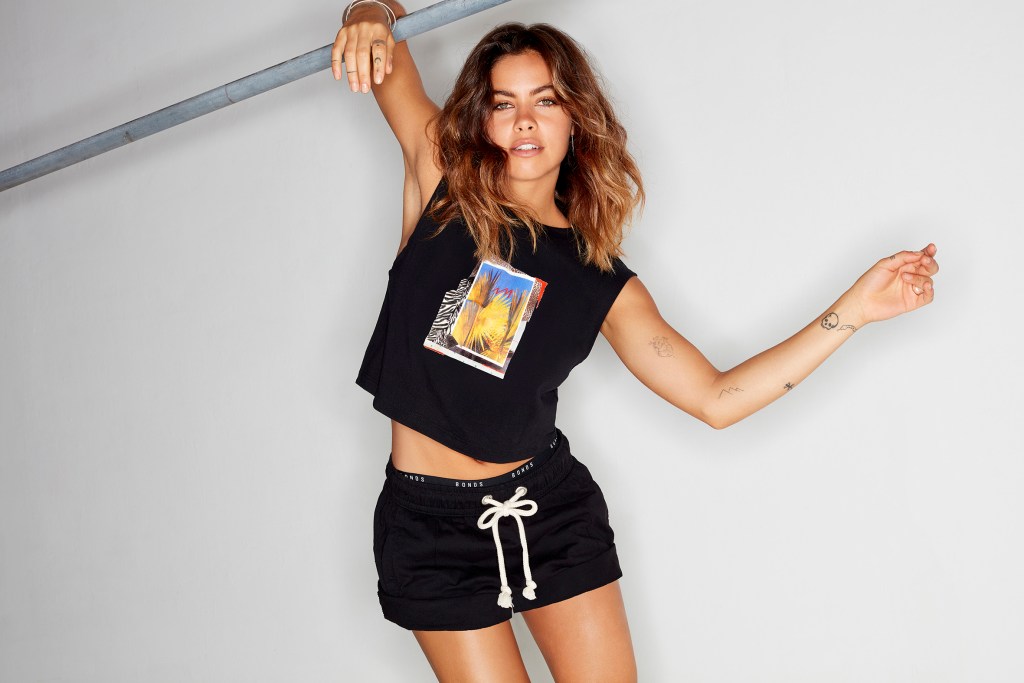 rustles just beside me.

The breeze it blows not from the sea,

riddled by the reef.

Dusted grey are the leaves.

I never want to leave.

SHIRT 3: MONOCHROMATIC ME A self-portrait of Elashiry. 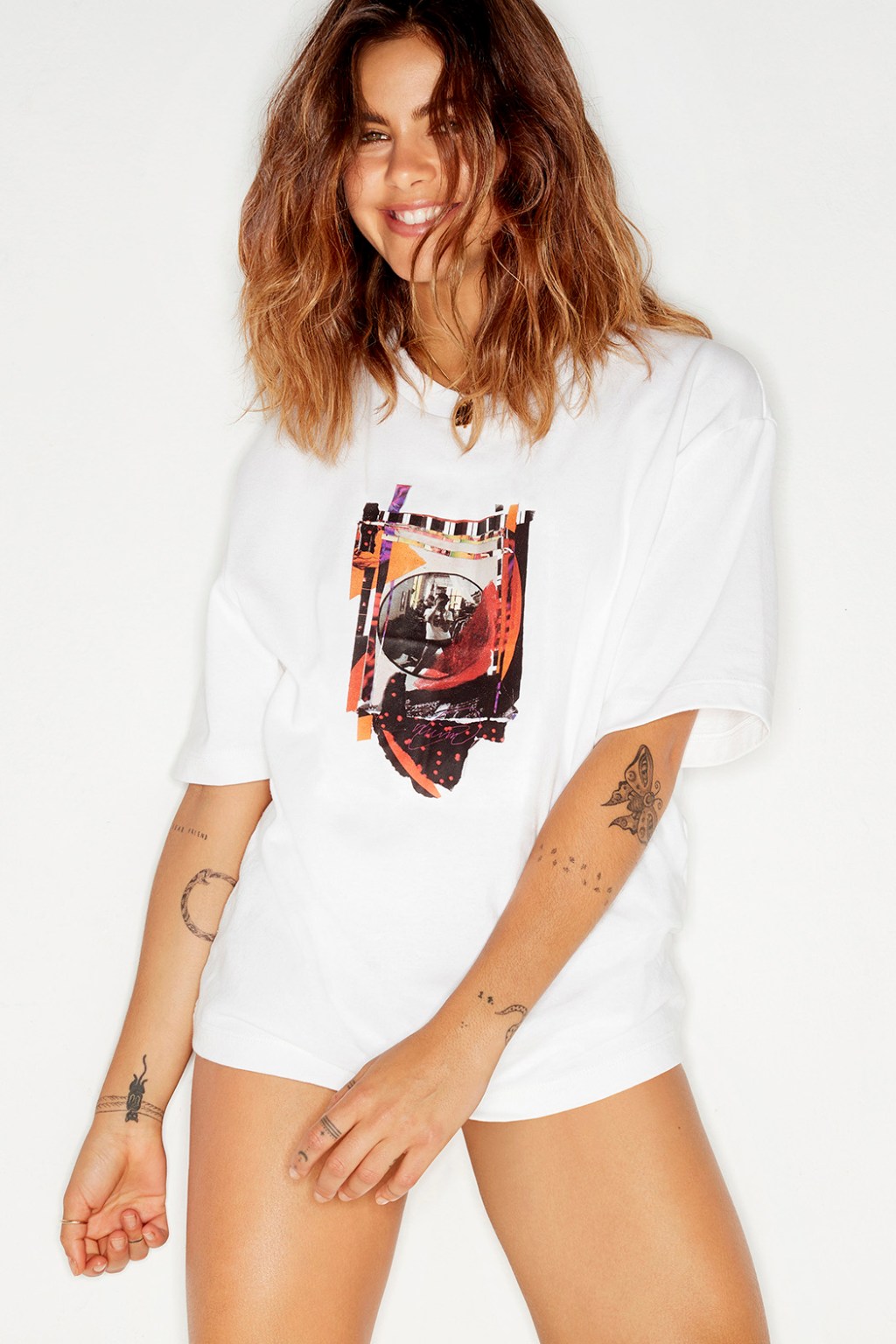 Shadows dancing down the hall.

ripples on a metal tin.

a place perhaps to fit in…

This monochromatic circle I’m in.

SHIRT 4: STICKY TOES Bella Thomas again, her feet amongst the rock pools at Clovelly in Sydney. 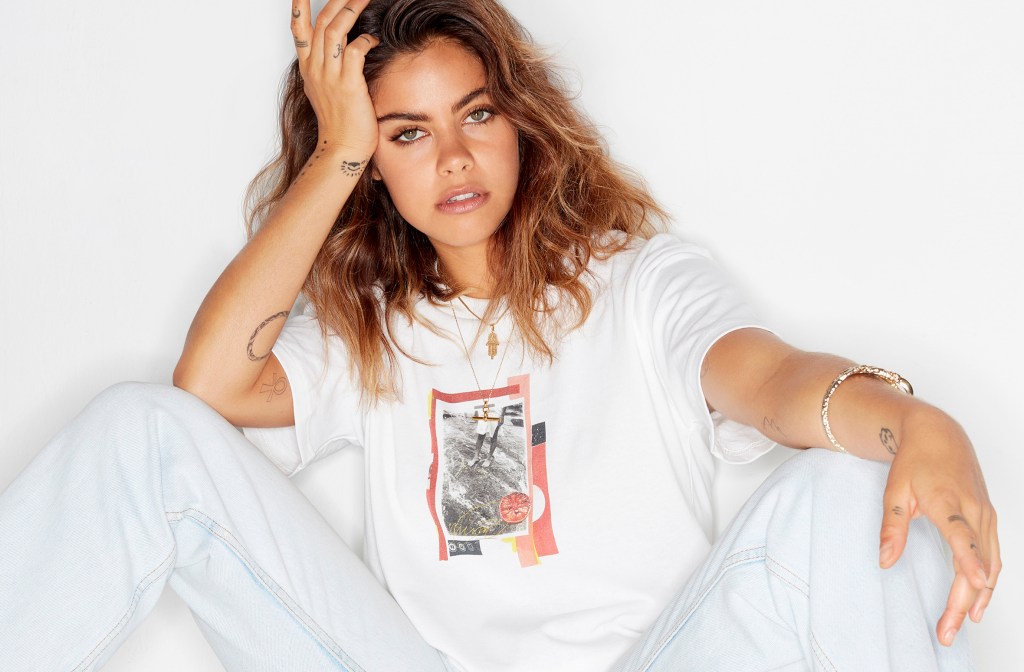 In flight I go.

At home, no sand gets on my toes.