Following the passing of Her Majesty Queen Elizabeth II aged 96 last week, Meghan Markle returned to the UK at the weekend to pay her respects accompanied by her husband Prince Harry. For the first time since 2020 she was captured alongside Prince William and Kate Middleton, now formally known as the Prince and Princess of Wales.

The four royal family members stepped out in front of an overwhelming crowd at Windsor Castle at the weekend to mourn the loss of their monarch. They looked upon the many flowers and tributes that were laid in the Queen’s honour and embraced upset fans. As is customary, they wore black with the Duchess of Sussex also making a small tribute to the late Princess Diana.

In photos she is captured wearing a Cartier watch which is believed to have once been owned by the Princes’ mother. It’s not the first time Markle has made a sartorial nod to the Princess and this year travelled to New York City with a Lady Dior bag in tow.

The two couples have had a strained relationship following the departure of the Sussexes to the US in 2020. The Prince and Princess of Wales reportedly invited the couple on the Long Walk this weekend. It “was an important show of unity at an incredibly difficult time for the family,” a royal source told People.

Markle and Prince Harry attended the Queen’s Platinum Jubilee in June but did not publicly interact with Prince William and Princess Kate.

Queen Elizabeth II’s state funeral will occur from 11am local time (and 8pm AEST) on September 19 from Westminster Abbey in London. More details to come. 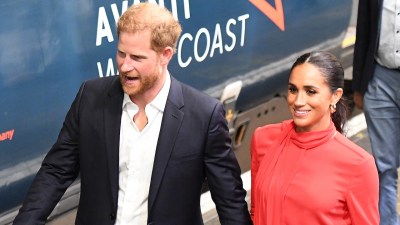