Most of fashion week is a marathon. Whether you’re a journalist or a designer or notable personality, the week that looks so luxurious through the pixeled frames of Instagram’s façade is actually more-so a race against time. Yesterday, I was stuck in such bad traffic I thought I’d miss Hansen & Gretel’s resort 2020 showcase. I battled back streets before finally, luckily, arriving to the glass doors of Jardan’s storefront. A chic, unique locale for a brand whose image is exactly that.

Designer Ainsley Hansen got her “break” by way of Mercedes-Benz fashion week. The young Sydneysider showed her graduate collection back in 2009 and was soon snapped up to begin a blossoming career with labels like Josh Goot and Gary Bigeni. In 2012 she started Hansen & Gretel. A streetwear label that confidently injects creative subculture into its seasonal offerings. Looking through a H&G range is to know what youthful fashion followers are into, what they’re wearing and what their latest image du jour entails. Hansen manages to tap into their niche without naffness. In fact, when you scroll the shopping portal of her website, it’s as though she invented it.

There are few key trends emerging this season, of which we will cover in more detail come Friday. However, one in particular that loops back again and again is a kind of Disco-meets-90s. This collection’s early nineties nuances via such things as bucket hats, creeper sandals, bias-cut skirts and grandma florals were fused with a vintage Californication that had a distinct 70s accent. The incorporation of chevron Henley knit tees, satin pyjama-style sets and short-sleeve button-downs added to the Johnny Depp in Fear and Loathing In Las Vegas vibe I just can’t shake. Perhaps it’s to do with men’s offerings being on the rise right now, too. For H&G specifically, this was their first season delving into the boy market, and they did so with seamless success.

Jardan (a California-cool, pastel-hued furniture flagship store in Sydney’s Paddington) is set over three levels, connected by a blush pink central spiral staircase. The well-dressed crowd were treated to plush armchairs and ottomans that snaked the boundaries of the entire place. Decadent and relaxing for us, not so much for the models who had to walk the stairs countless times. However, they didn’t seem to mind, and nor did they struggle, because the range seemed as deliciously comfortable as it was kitschy cute.

Key to this season’s H&G aesthetic was a peace-and-love flock of satin and cotton wearables. Floaty go-go peasant shirts met with sheeny separates and smatterings of netty and goldy halters. Long-line bias dresses offered the most minimalist cuts on the ‘Venus’-titled menu while the tiered ruffle skirts and tie-front tops in iridescent metallics pledged the most fun. The boys’ pieces of satin separates, denim crops and slouchy white trousers will surely do well with the coastal-cool crowd come next Bondi summer.

As soon as the show finished (after a MUCH-appreciated croissant gift from Porch & Parlour) so began the rush to the next show. I scooted back to my car dusting croissant crumbs off my 8-month-pregnant belly and took a breath. I turned on the car and ‘She’s Got To Be Loved’ by 90s Aussie-NZ popstar Jenny Morris ignited on the radio. Upbeat, catchy, cute and one I hadn’t heard for decades. A charming symmetry or just indicative of the kind of radio station I listen to? Whichever, I was instantly reminded of being very young, circa 1990, dancing with my sister in the living room in our satin pyjamas. Of car rides to the shops to get a shiny new skirt or a bucket hat for the beach or a party dress fitted with puffy sleeves. Hansen has tapped that 90s memory, despite her youth. And, with Tarantino’s upcoming LA-in-the-70s flick Once Upon A Time In Hollywood tipped to once again flood fashion with a funky-psychedelic era homage, her Disco-California angle is a stellar move as well. 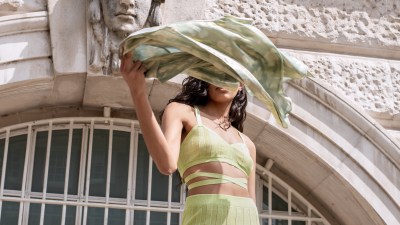 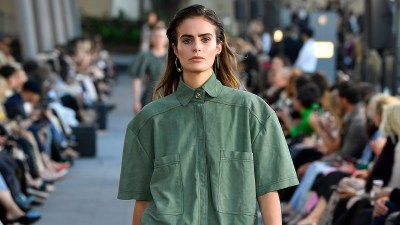 Trend Report. Fashion Week’s Dust Has Settled….So, What Are We Actually Wearing?
Next page