Wait, Why Is TikTok So Obsessed With Madison Beer’s Makeup Routine?

Users are going crazy for the singer's transformative makeup tricks

In a recent video, Madison Beer revealed her complete makeup routine. The singer’s signature look – which is characterised by feathery brows, full lips and a thin wing of liner applied to elongate the eye – subsequently went viral on TikTok, as users tried to create Beer’s makeup routine at home to test the effectiveness of her tips and tricks.

As it turns out, Beer’s glow-giving makeup routine appears to be universally flattering, with scores of users reporting its effortlessly transformative effect. To date the hashtag #madisonbeermakeup has garnered more than 13.2 million views on TikTok – so why is everyone so obsessed with the 22-year-old’s makeup routine?

Below GRAZIA breaks down every step, plus the products she swears by, to find out.

After finishing up her skincare regimen, which heroes anti-fighting ingredients and a crystal face roller, Beer begins her makeup routine by brushing her brows up with soap. Next she applies Glossier’s Skin Tint for light coverage, with NARS’ Radiant Creamy Concealer in two different shades – one to camouflage any blemishes, the other to highlight and brighten the under-eye and t-zone areas – which she gently pushes into the skin with a Beautyblender sponge.

Contour, Highlight and (Lots Of) Blush

Next comes the contour and highlight, courtesy of Charlotte Tilbury’s Hollywood Contour Wand to create angular cheeks and Beauty Light Wand – Beer’s desert-island product – dotted across the high points of the face. Perhaps most notably, Beer swears by a significant amount of blush for creating a fresh, natural flush to the skin, dotting it across her cheeks and over the bridge of her nose. She blends, adds Fenty’s Beauty’s Sun Stalk’r Instant Warmth Bronzer for a sunkissed finish, before going over her blush again with Fenty Beauty’s Killawatt Freestyle Highlighter Duo in Ginger Binge and Moscow Mule.

Beer then starts her eye makeup, using her own palette in collaboration with Morphe (the Morphe x Madison Beer Channel Surfing Artistry Palette) to create a super soft smokey eye with whisper-thin liner at the edges to accentuate her eyes. She then coats her lashes in Glossier’s Lash Slick, overlines her lips with Charlotte Tilbury’s Lip Cheat Lipliner to create a pillowy pout, before polishing it all off with a swipe of Ulta’s Juice Infused Lip Oil… oh, and another layer of the Beauty Light Wand in Spotlight, in case you couldn’t see Beer’s radiance from space.

Those who’ve followed Beer’s routine have reported a natural yet decidedly ‘done’ end result, which focuses on enhancing your natural features rather than covering them up. It’s sultry, summery perfection that seemingly works for all face shapes and skin types.

Excuse us while we try Beer’s makeup routine and clever techniques in full. 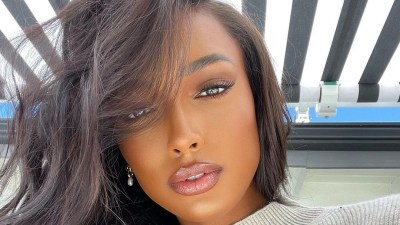