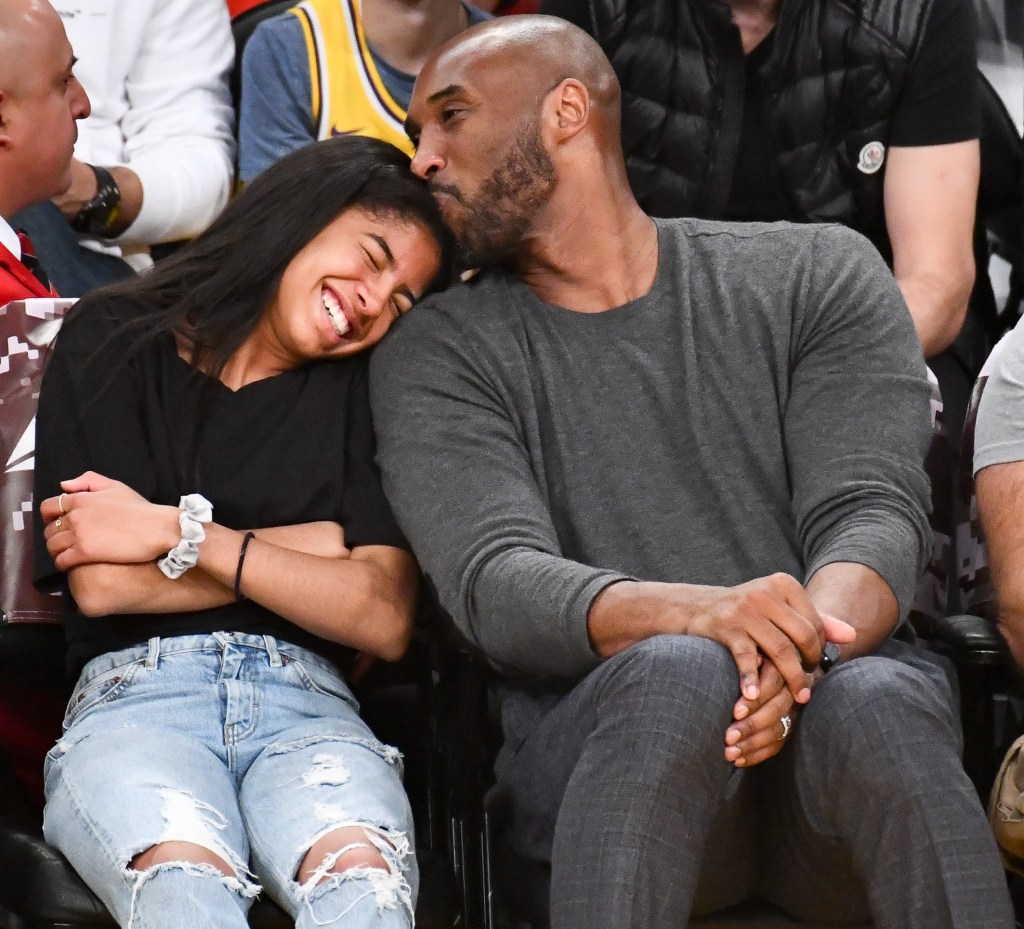 Vanessa Bryant, the legendary basketball player’s widow, marked the somber day by sharing  a heartfelt letter from her daughter Gianna’s best friend, Aubrey, alongside her own touching tribute on Instagram. 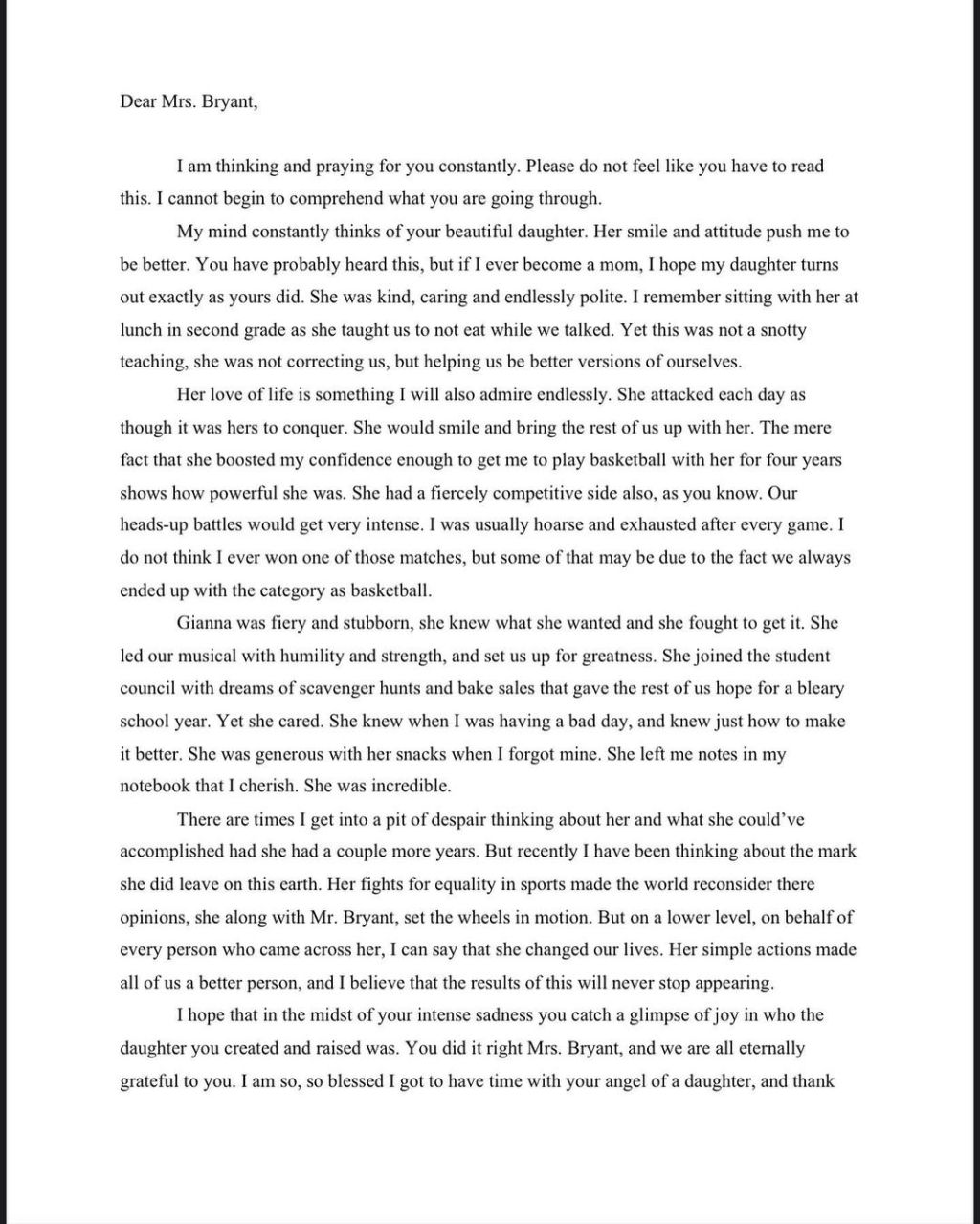 “Today I received this sweet letter from one of Gianna’s best friends, Aubrey. I love you Aubz (as my Gigi would call you), ” Bryant captioned the Instagram post which —— “Thank you so much for beautifully sharing some of your memories of my Gigi with me and allowing me to share them here on my ig. My Gigi is INCREDIBLE and I truly appreciate your thoughtful letter. She loves you so much. I miss my baby girl and Kob-Kob so much, too. ♥️I will never understand why/how this tragedy could’ve happened to such beautiful, kind and amazing human beings. It still doesn’t seem real. Kob, we did it right. Gigi, you still make mommy proud. I love you!”

The 38-year-old— who is also mom to daughters Natalia, 18, Bianka, 4, and 1-year-old Capri — concluded her post using the hashtags: “#PlayGigisWay #Mambacita #Mamba #DaddysGirl” and “#GirlDad.”

In the letter sent to her late friend’s mom, the young girl told her that she “did it right” when it came to raising Gianna. “If I ever become a mother, I hope my daughter turns out exactly as yours did,” Aubrey wrote. “[Gianna’s] love of life is something I admire endlessly … She would smile up the rest of the world.”

“While looking back on the mark Gianna left “on this earth,” Aubrey wrote: “Her fights for equality in sports made the world reconsider there opinions, she along with Mr. Bryant, set the wheels in motion.” 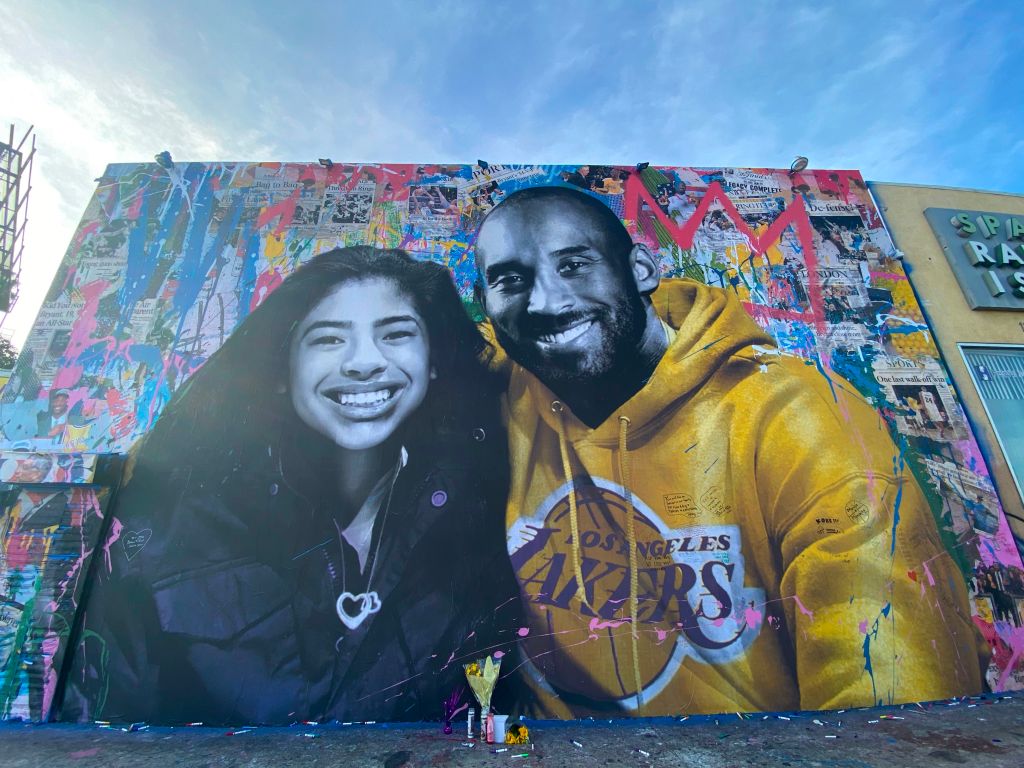 As many remember, on the morning of January 26, 2020, a luxury private helicopter with nine people aboard, including the NBA star and his 13-year-old daughter, crashed into the side of a mountain in Calabasas, California, about 30 miles northwest of downtown Los Angeles. All those aboard, including the pilot, were killed on impact

Following the news, more than 200 people gathered at the foot of the hill close to the crash, with many wearing Bryant’s jersey and holding basketballs. People also formed an impromptu memorial at the Staples Center, the home arena of the Lakers just hours before the arena was scheduled to host the Grammy Awards. During the ceremony, host Alicia Keys and Boyz II Men performed “It’s So Hard to Say Goodbye to Yesterday” in tribute to Bryant, and other performers, including Lil Nas X, Lizzo, Run-DMC, Aerosmith and DJ Khaled, incorporated tributes to Bryant in their performances. 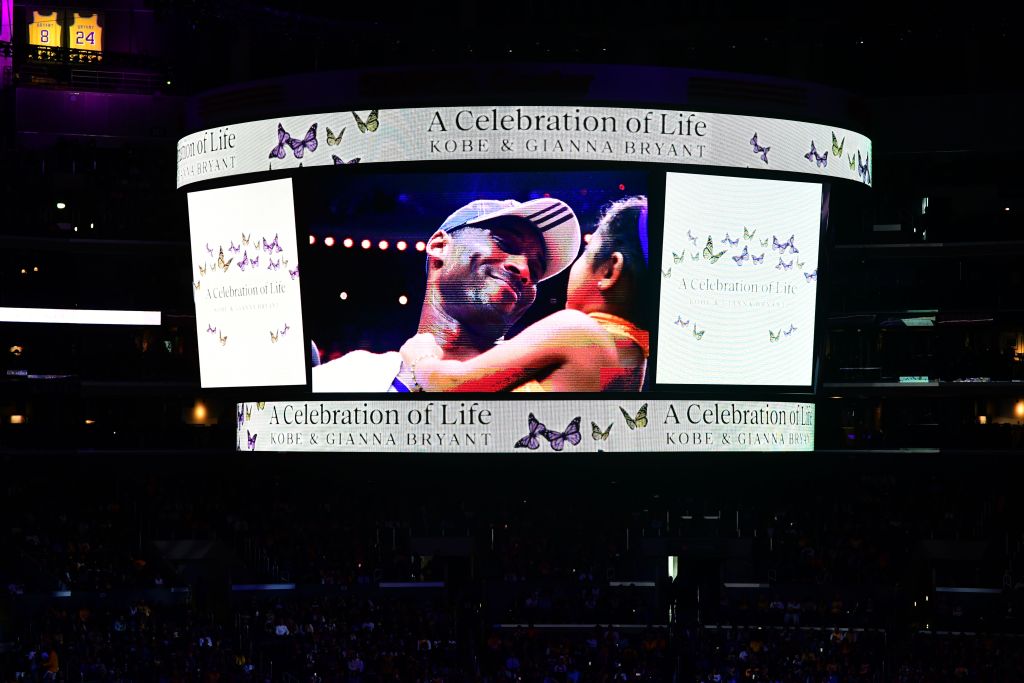 A week after the Oscar winner’s death, Staples Center staff began to clean up the makeshift memorial outside the arena, but promised to catalog, pack, and ship all nonperishable items to his family. Among the items recovered were 1,350 basketballs, as well as 25,000 candles, 5,000 signs or letters, 500 stuffed animals, 350 pairs of shoes and 14 banners.

As we remember Kobe and Gianna, we’re looking back at the sweet family moments on and off the court. Grab the tissues and scroll through 10 heartfelt photos below. 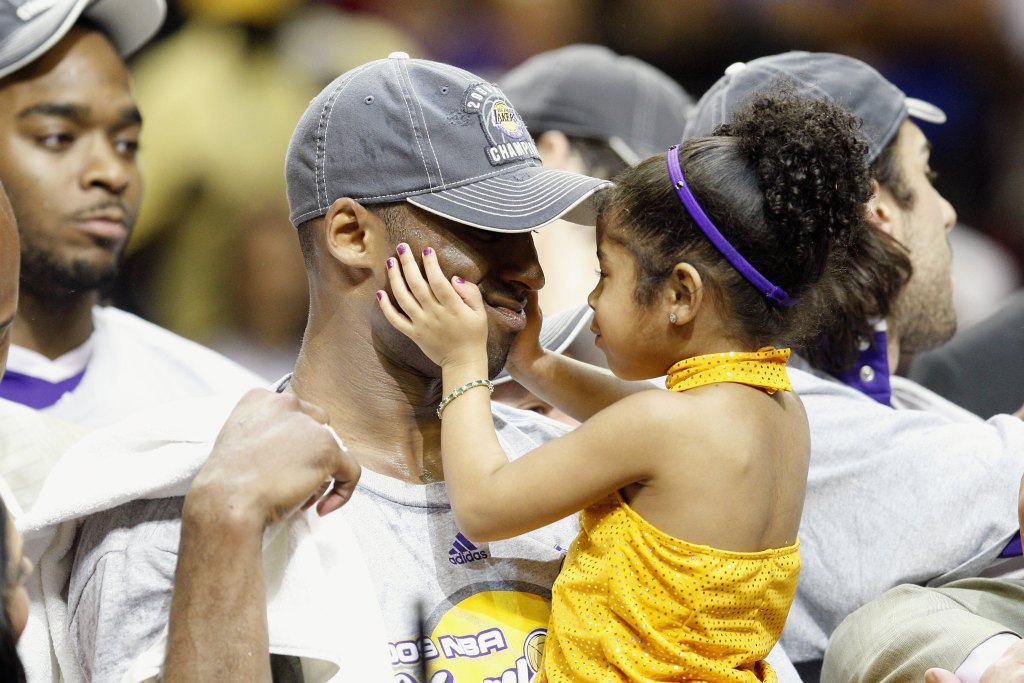 On June 14, 2009 Kobe held his daughter Gianna, after the Lakers defeated the Orlando Magic in Game Five of the 2009 NBA Finals. 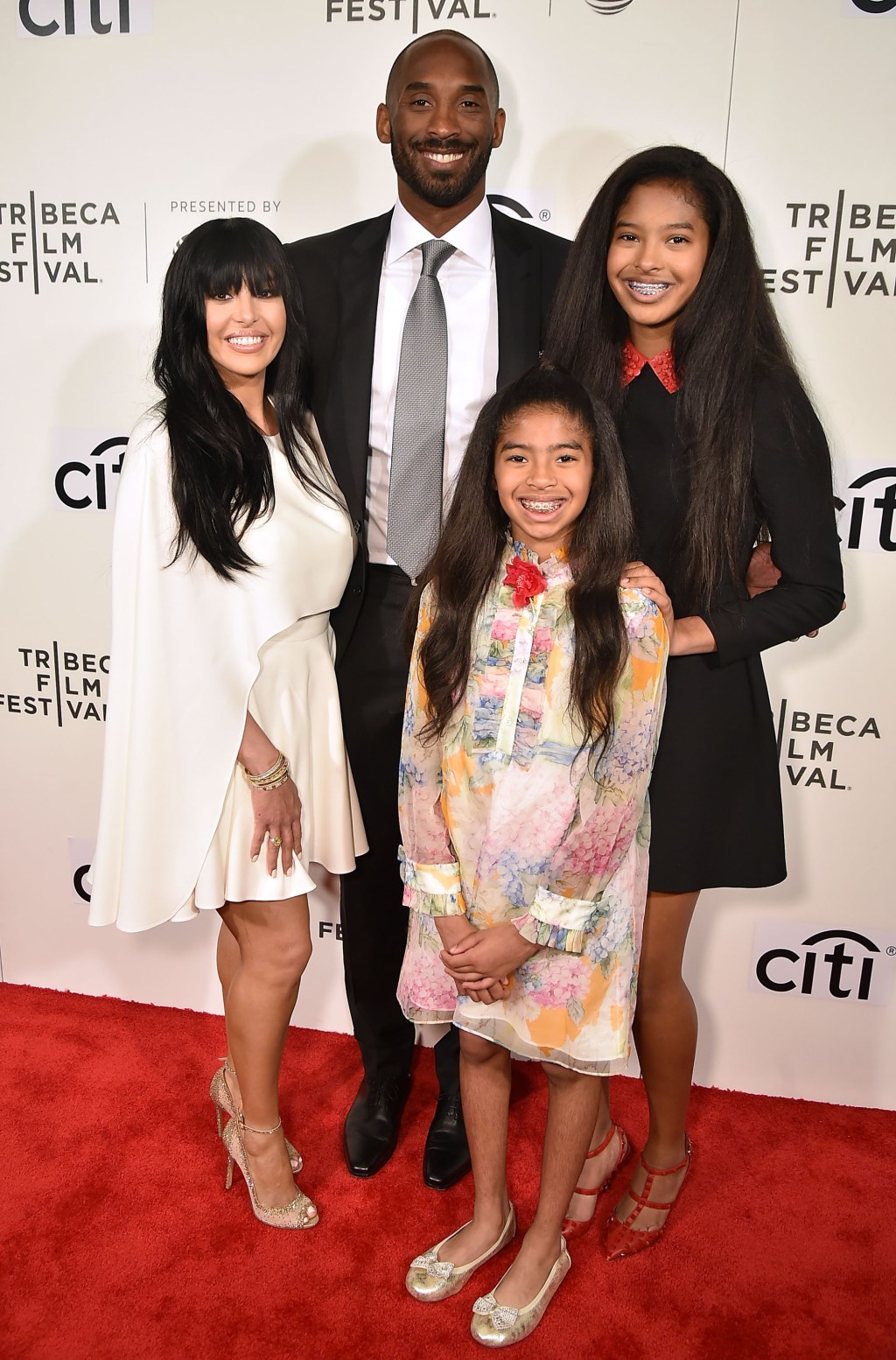 Vanessa and Kobe Bryant and their daughters Gianna and Natalia walked the red carpet together at the Tribeca Talks: Kobe Bryant with Glen Keane – 2017 Tribeca Film Festival at BMCC Tribeca PAC on April 23, 2017 in New York City. 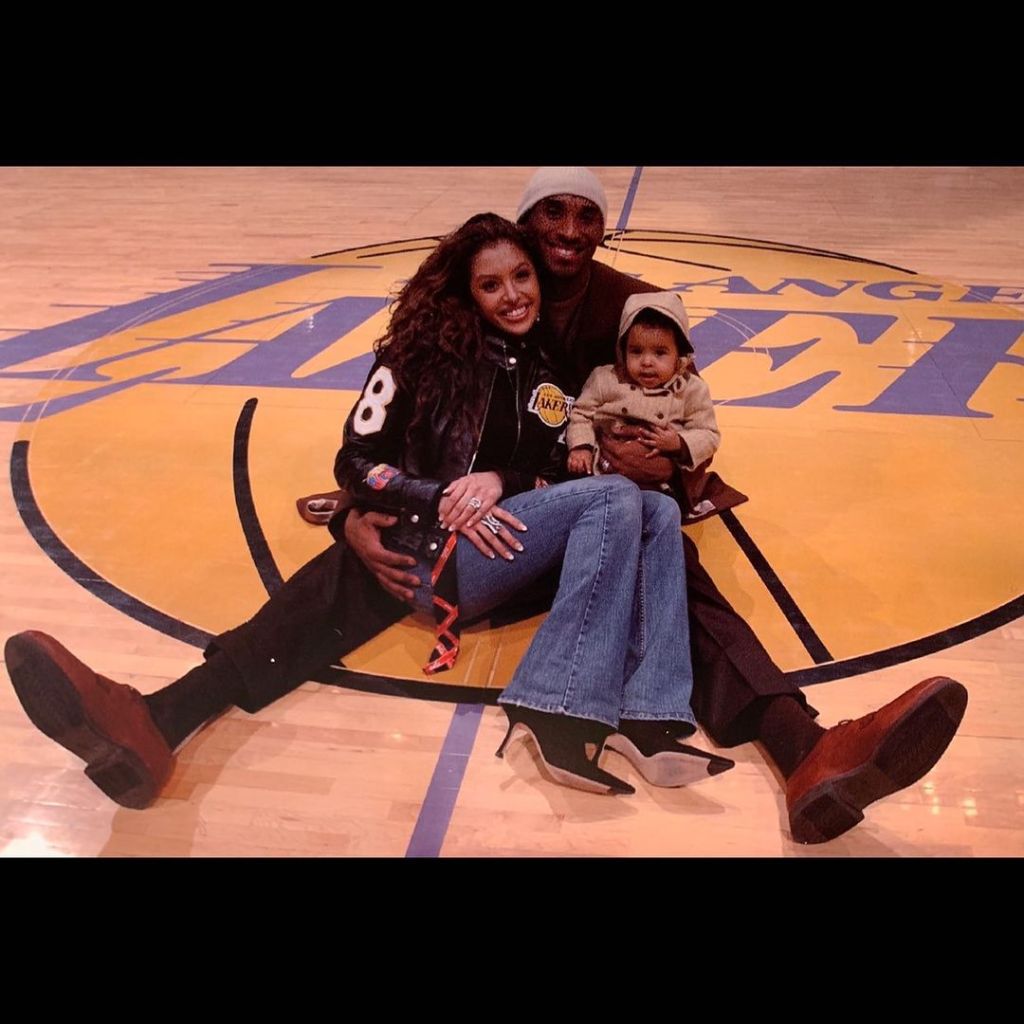 Earlier this month, Vanessa shared a sweet throwback of her and Kobe’s first born, daughter Natalia, in honour of her. 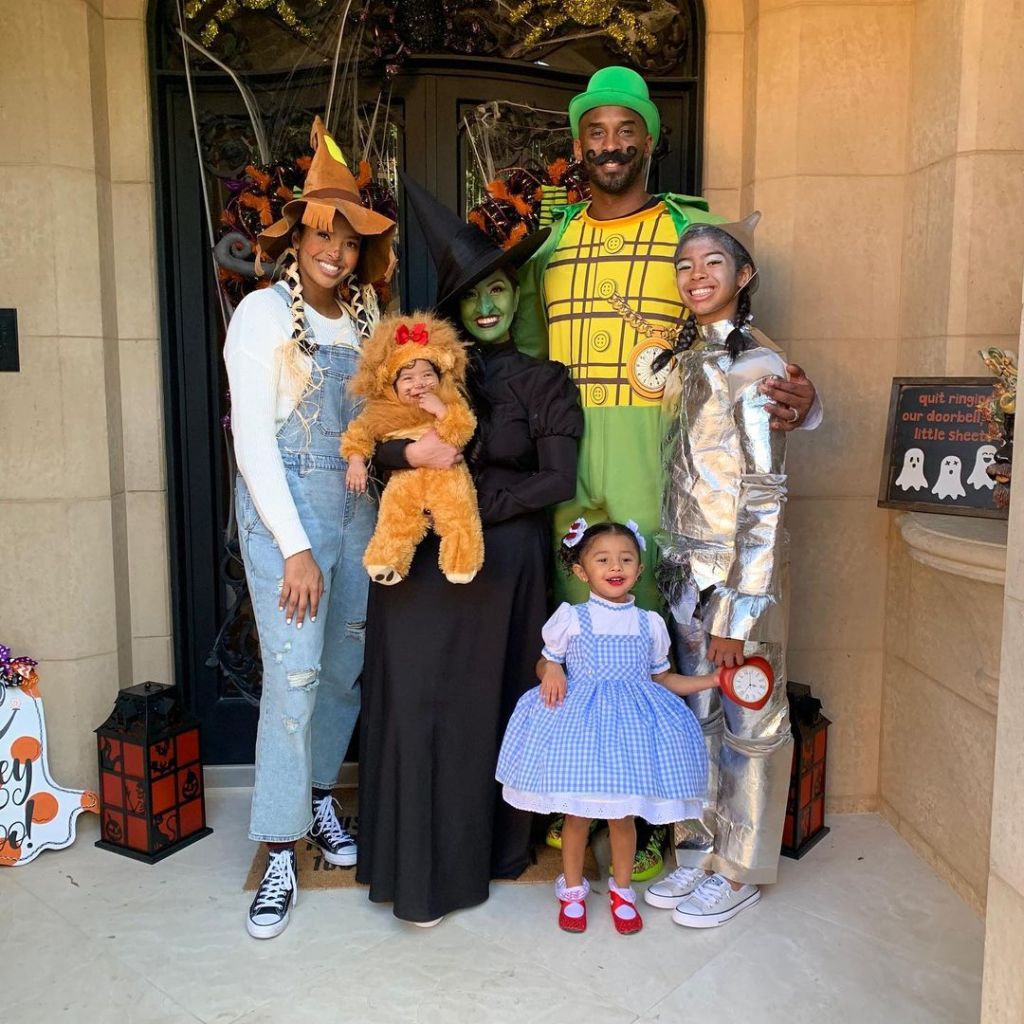 For Halloween 2019, the Bryant family dressed up as characters from The Wizard Of Oz. 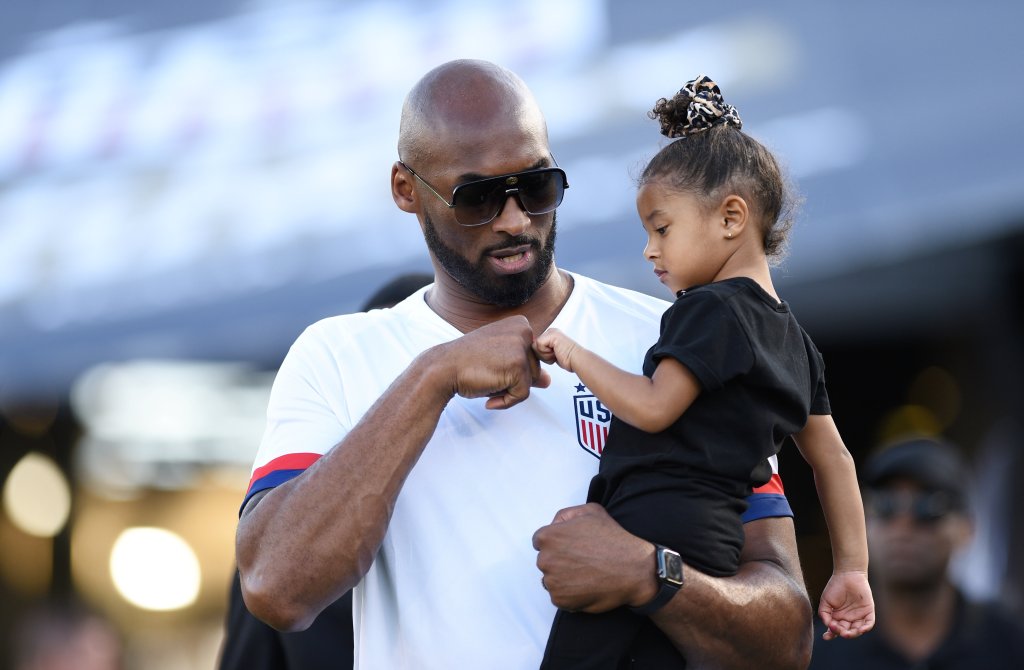 On August 3, 2019, Kobe gave his daughter Bianka Bella a fist bump prior to the Women’s International Friendly soccer match between USA and Republic of Ireland at Rose Bowl in Pasadena. 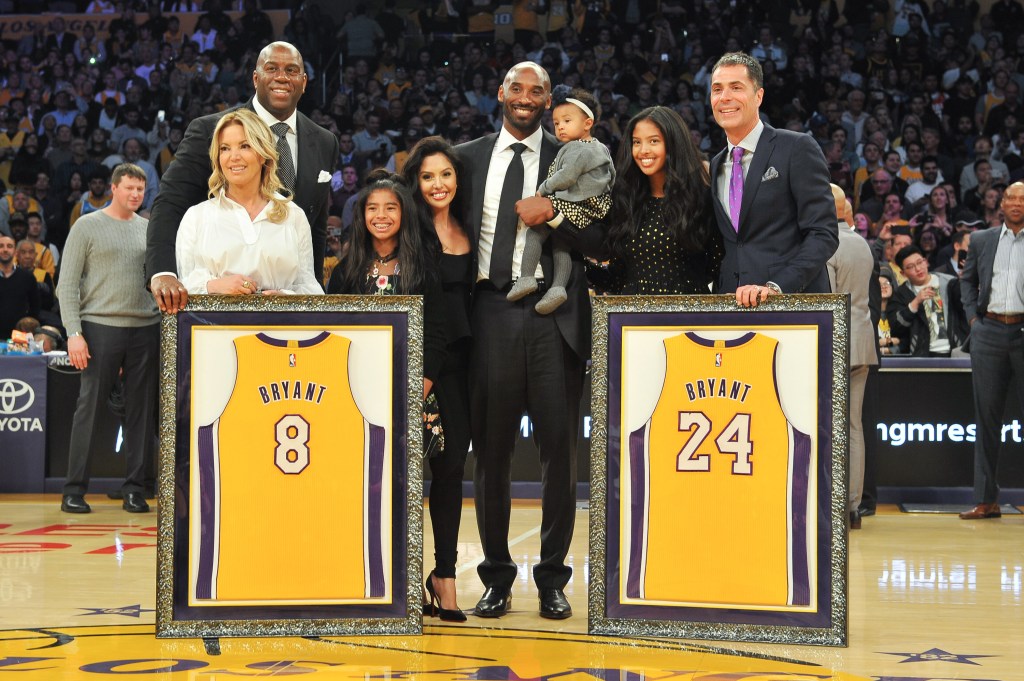 The Bryant family was joined by Magic Johnson and Rob Pelinka during Kobe Bryant’s jersey retirement ceremony at halftime of a basketball game between the Los Angeles Lakers and the Golden State Warriors at Staples Center on December 18, 2017 in Los Angeles. 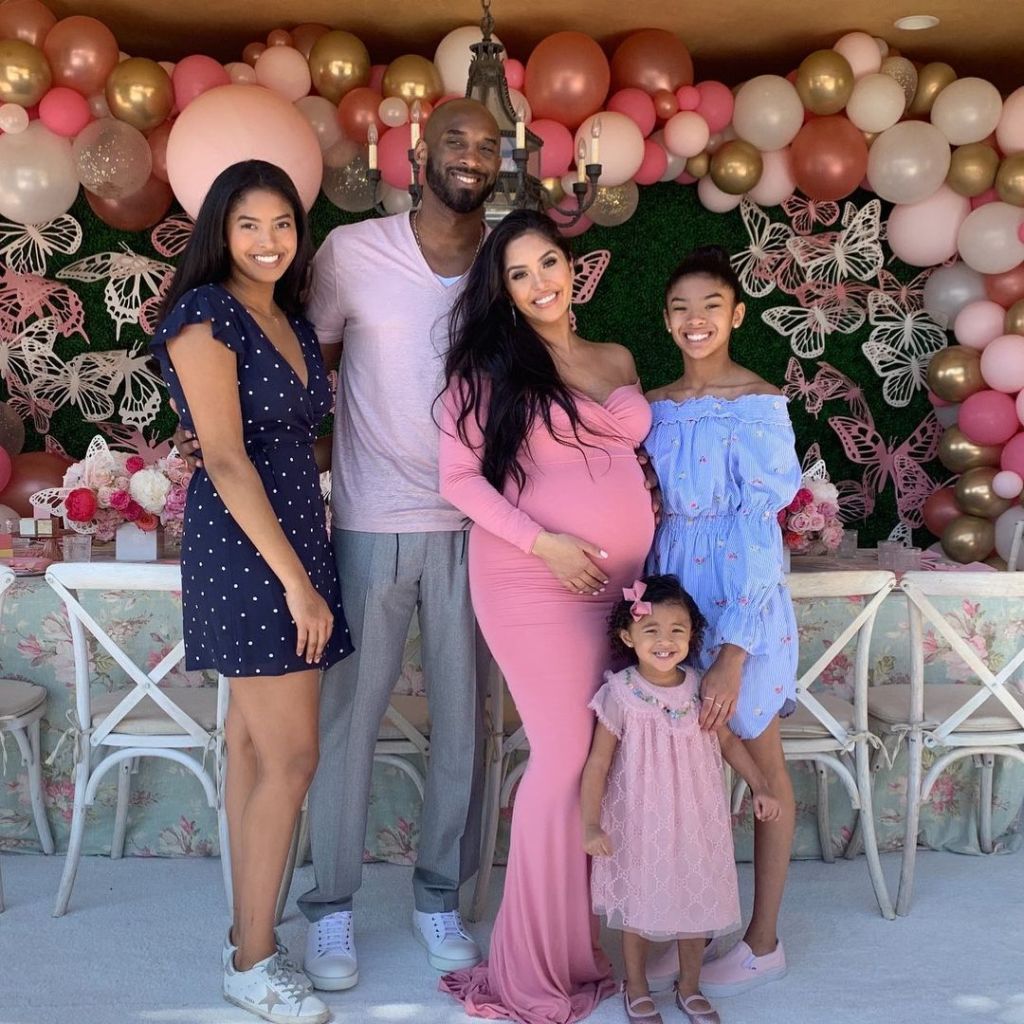 While pregnant with baby Capri in 2019, Vanessa celebrated her baby shower with her husband and three oldest daughters. 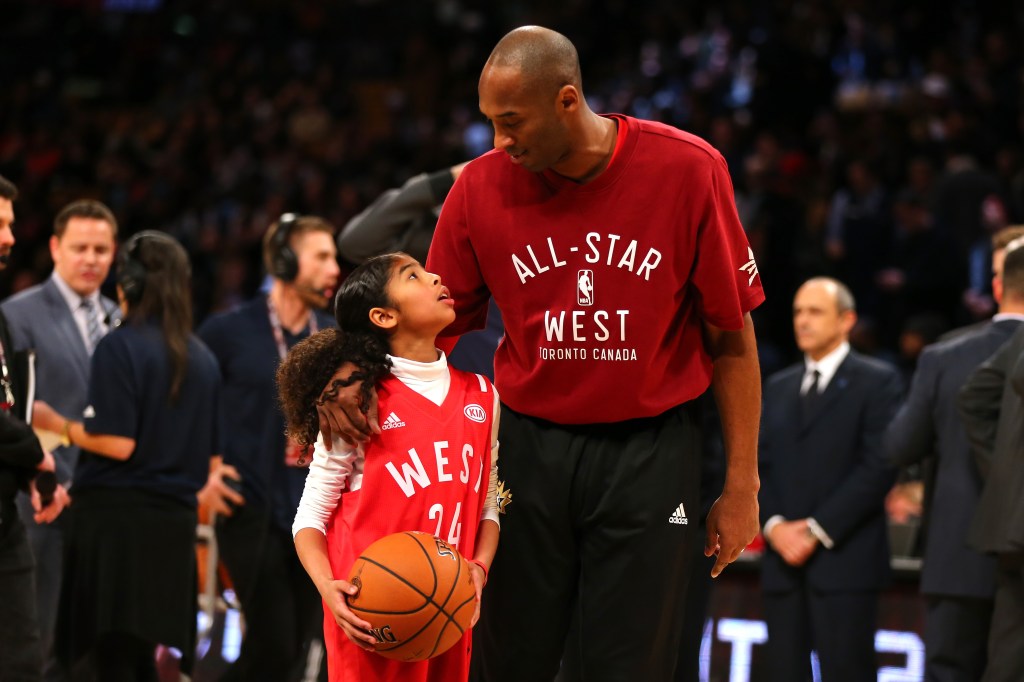 On February 14, 2016, Kobe warmed up with daughter Gianna during the NBA All-Star Game 2016 at the Air Canada Centre in Toronto, Ontario. 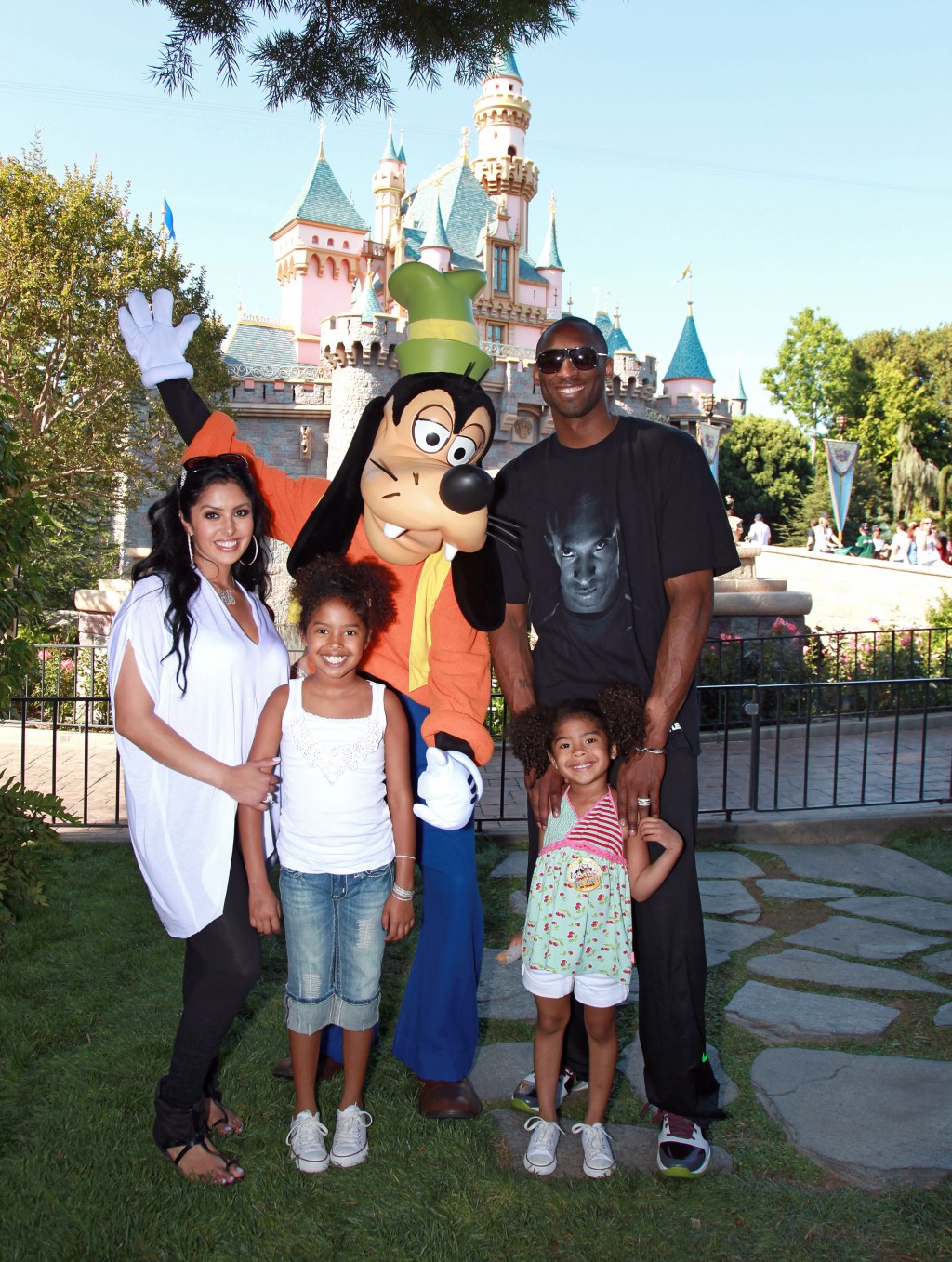 Back in June 2010, the Bryant family celebrated the Lakers’ NBA championship with Goofy at Disneyland. 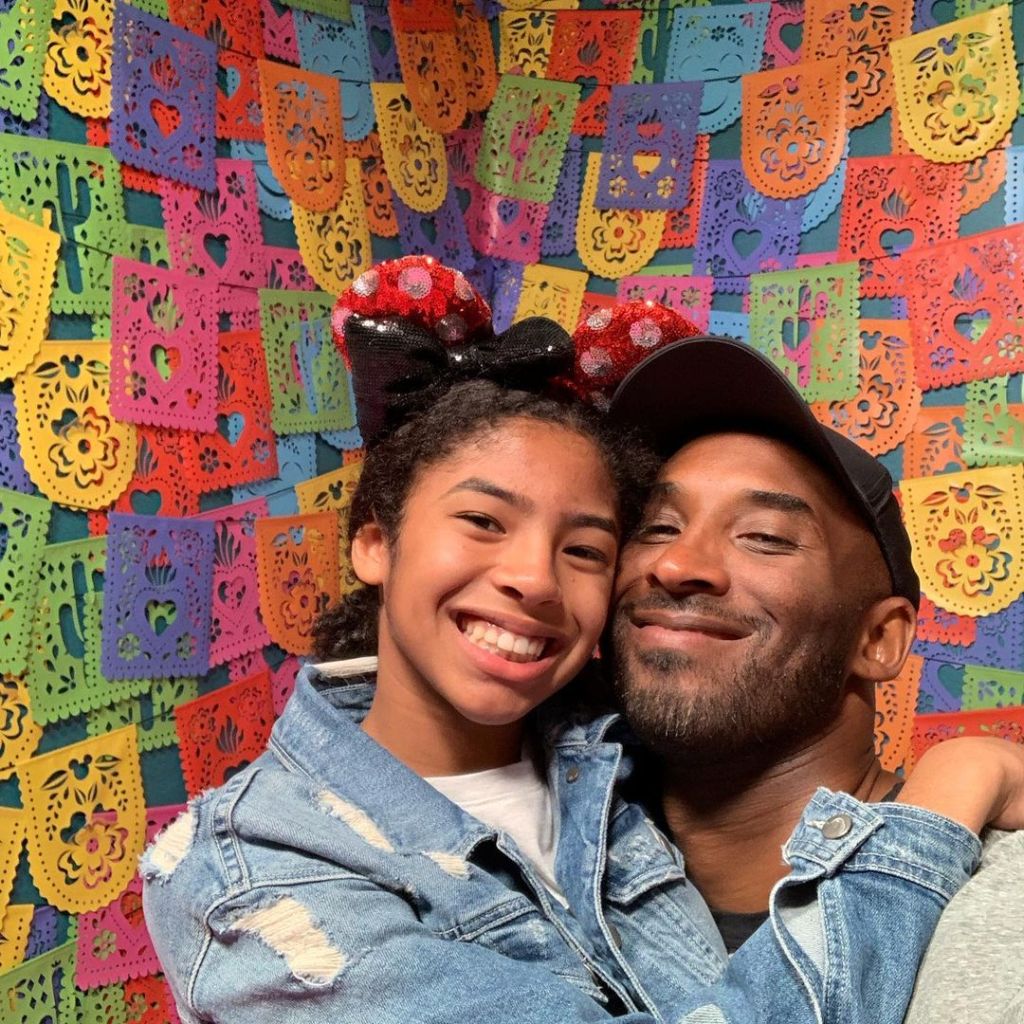 Just months before their passing, Kobe posted this sweet selfie of he and Gianna on his Instagram. 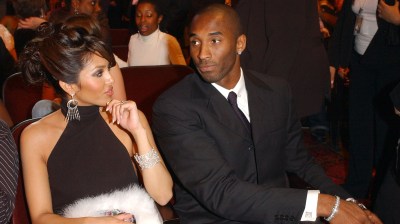 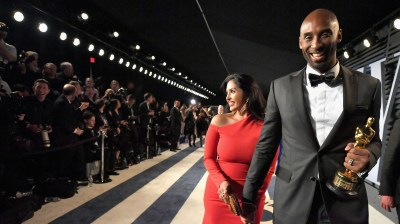