Kim Kardashian Commits This Cardinal Beauty Sin On The Regular, But “You Would Never Know”

And it's "probably the worst advice"

As a beauty entrepreneur and skincare founder of SKKN By Kim, you might assume that Kim Kardashian has strict rules when it comes to her skin. But as the reality star revealed in a recent interview with Allure, there’s one cardinal beauty rule that she happily breaks on the regular – she sleeps in her makeup.

“One talent that I have that is probably the worst advice to give you guys, is I can sleep in full makeup,” she revealed in the video, before leaning back to demonstrate sleeping flat on her back, adding “And I could sleep like this and never ruin my makeup.”

While skin experts have long warned of the havoc that sleeping in your makeup can wreak on your skin, it seems Kardashian chooses sleep over skincare by getting ready the night before and going to bed after a visit from her glam squad.

“Sometimes you’ll see if I have to get up really early in the morning, I’ll do my makeup the night before and have it done, sleep, not move, and wear it the whole next day,” she said. “And you would never know. My makeup lasts a really long time on my face, I don’t know why.”

It’s not the first time the Skims founder has admitted to sleeping in her makeup. She got her glam done the night before an appearance on Live With Kelly and Ryan recently, saying, “I got my makeup done last night [and] slept in it so I would look presentable for you guys,” she told the hosts.

“She’s inspired me when I am really lazy and I can’t do my makeup the next day, so I’ll sleep in my makeup. I know that’s probably the worst advice, but she has all the magic creams to put on the next day to make up for it.”

Perhaps that’s her attitude towards her SKKN By Kim line, too? Either way, this is one habit experts wouldn’t recommend you adopt. 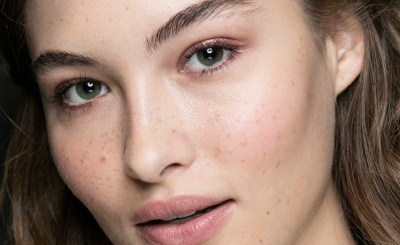