I’m not often rendered speechless, but at the weekend the Venice Film Festival was incredible. Between Zendaya’s wet-look Balmain ensemble and Dakota Johnson’s silver Gucci gown. Kate Hudson was also in attendance at the annual gala and all I can say is wow.

Styled by Sophie Lopez, Hudson appeared on the red carpet for the Celebration of Women in Cinema event. She wore a black cutout halter-neck gown from cult label Mônot and Crivelli jewellery. On Instagram the actress published a photo and captioned it, “Before you leave the house, look in the mirror and take one thing off.” -Coco Chanel I chose fabric….”

Mônot was launched in 2019 by Lebanese designer, Eli Mizrahi. The brand’s ethos is to empower women through individuality so it is no wonder the likes of Cardi B, Lizzo and Zendaya have worn the label in the past. You would also recall Dua Lipa wearing Mônot with a Savage x Fenty g-string in January – iconic.

Demi Moore was seen arm-in-arm with Hudson in a white two-piece set. Considering either actress has barley aged, it feels like the ’90s all over again.

The 42-year-old appeared on the red carpet for her upcoming film Mona Lisa And The Blood Moon on Sunday. In a second risqué cameo, the How To Lose A Guy in 10 Days star wore a scarlet red Valentino Resort 2022 gown.

Mona Lisa And The Blood Moon follows a young girl with special abilites who escapes an asylum in New Orleans and attempts to make it on her own. Directed and written by Ana Lily Amirpour, the film also stars Ed Skrein and Craig Robinson.

Hudson is mourning the loss of her long-time friend and celebrity hairstylist David Babaii who passed away on September 1. She honoured the creative on Instagram, writing, “21 years of shenanigans and laughter. My dear boo, I love you. Processing this loss is really sad and challenging, I will miss you terribly. Forever and always 💔 @davidbabaii.”

He was behind the manes of Hudson, Sandra Bullock, Angelina Jolie and Gwyneth Paltrow. The cause of death is currently unknown however he was just 46-years-old.

All The Looks From The 2022 Emmys Red Carpet 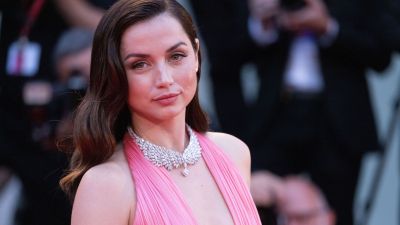