Breakout ‘Pose’ star Indya Moore is on the runway, where they belong

In the brilliant hit American drama, Pose, Indya Moore’s character, Angel Evangelista, desperately wants to be a model in New York, but the competition and the road there – sleazy photographers very much included – isn’t easy.

In real life, Moore, who is one of the show’s breakout stars – and one of the women famously snubbed by the Emmys this year, despite Pose itself being nominated in numerous categories – has done their character proud. After being asked by Jason Wu to open his New York Fashion Week show, Moore made their NYFW debut over the weekend wearing a terracotta eyelet maxi dress, beaded jewellery and striped, tasseled sandals.

Moore wore their hair in natural curls and minimal makeup – because, seriously, who needs makeup with a face like that – and looked every bit the seasoned professional, despite never walking the runway before.

To celebrate the moment, Moore shared a behind-the-scenes photo with Wu on Instagram following the show, writing, “@jasonwu Invited me to open his show. Thank you so much! This is the first NYFW show I’ve ever walked. I’m so proud of Jason’s line, the fabric is incredible. its sturdy, soft and the clothing fits like a glove. Well done!”

Of course, due to the coronavirus pandemic, no guests were seated front row to see Moore’s debut this season, as designers are adapting by presenting socially distanced fashion presentations which are displayed via the CFDA’s new digital platform, Runway360.

Wu is one of 60-plus designers displaying their Spring 2021 collections this way, telling The Associated Press in an interview post-show that even while navigating a new world due to the pandemic, designers shouldn’t stop creating.

Though this marks Moore’s first runway appearance, they’re no stranger to the fashion world, having modeled for the likes of Louis Vuitton and Calvin Klein, as well as attending Prabal Gurung and Christian Siriano’s fashion week shows in the past.

Here’s hoping we see more of Moore on the runway very soon. 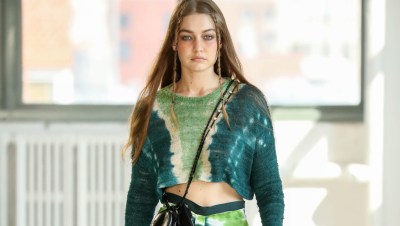 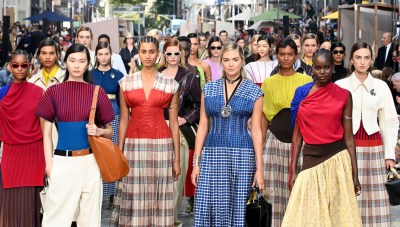