From duckbill toes to redefining its famed intrecciato weave, Daniel Lee proves his work for Bottega Veneta is no one hit (or season) wonder with another exceptional collection in Milan

When you’re onto a very, very good thing, why change it? If we were Daniel Lee, that’s the mantra we’d be sticking to, having cultivated the coolest fashion brand in all the land in just over a year. Although it feels like an eternity (remember fashion years are like dog years, rapid and advanced), it’s in fact only been three seasons at Bottega Veneta (not including Cruise and Pre-Fall) for fashion’s boy genius.

Since pouncing on us unexpectedly with his Pouch in 2018 – the crumpled squishy clutch that became the brand’s cult hit – he’s since become fashion’s holy Messiah, leaving a whole band of disciples in awe, patiently waiting his next move. He made us try shoes built like duckbills, sandwich cumbersome clutches under arms, give leather basketball shorts a go, and convinced us exaggerated square-toes are the way of the fashion future (now confirmed). Basically, Lee see, we do. 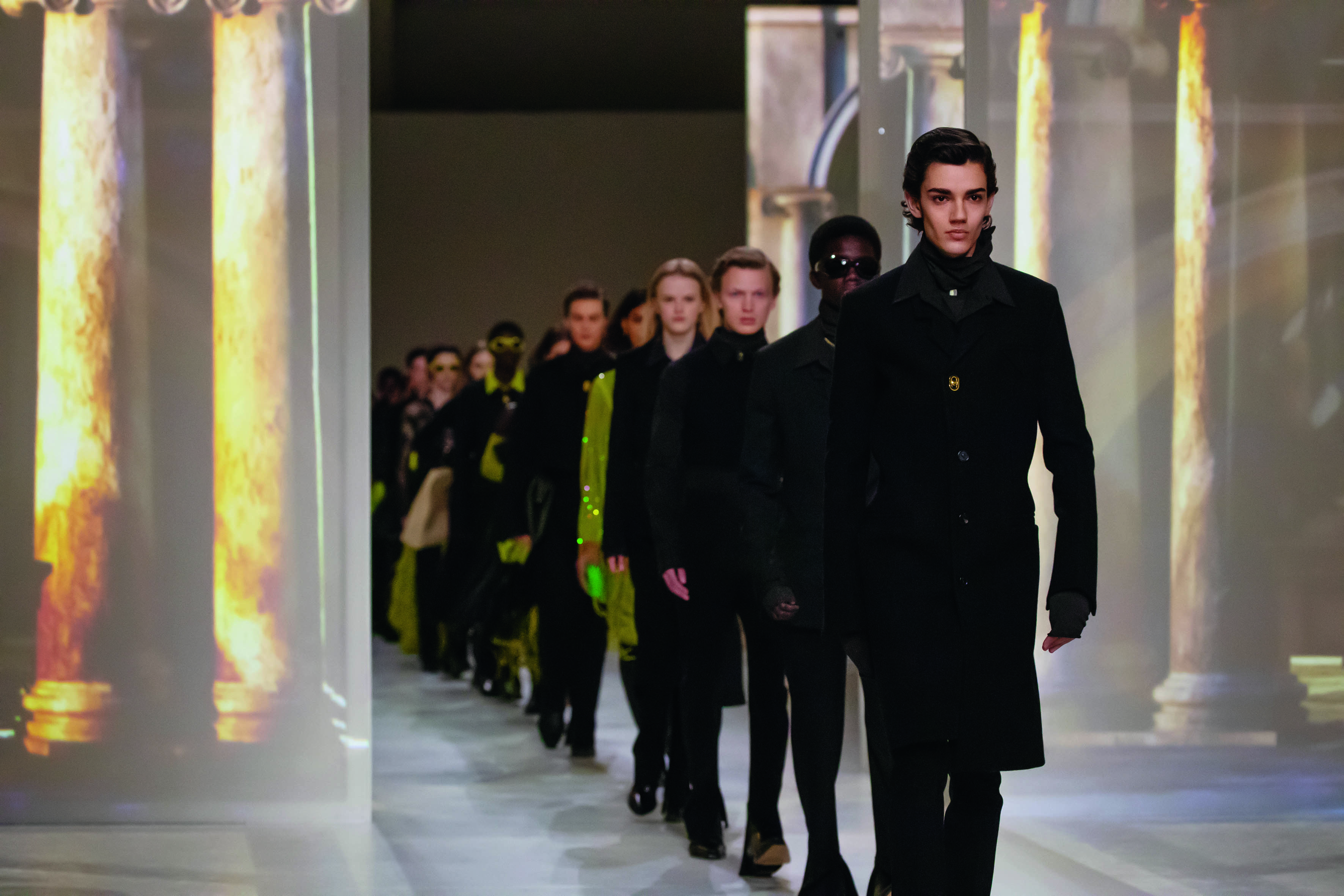 But he had, for the most part, shied away from the house’s history; ducking and weaving, so to speak, from the brand’s signature intrecciato weave favouring a whole new, highly modernised direction instead. His Pre-Fall 2019 taster and first Fall Winter 2019 runway saw whiffs of it; the grid like padding of puffy shoes and quilted skirts a riff on the brand’s signature leatherwork. Spring Summer 2020 saw its first overt iterations – or rather reiterations – in the form of quirky rectangle baguette bags, cassette cases and his signature mule, refashioned with lofty leather interlock.

This season, however, we see the true echoes of history; its famed weave reprised and reconsidered in perhaps its purest form (albeit still through Lee’s exhaustingly cool lens). Perhaps most interesting about Fall Winter 2020 is this return to where it all began. It’s the most overt expression of the house’s stylistic pillar we’ve seen from Lee, he fully embraced the intrecciato, even poetically turning a men’s long-line puffer vest into full-blown weave. But he still toyed with this tension between tradition and innovation, disrupting the age-old codes of the house with modernity via craftsmanship and technology.

His use of colour is also interesting. Fashion’s upper echelon has never looked too favourably upon searing colour, often deemed too gaudy, too tacky, too trashy. The elite rely on a restrictive palette of black, black and more black, with grey, beige and white, because it’s chic, no? But it’s this same elite who are now wearing Lee’s atomic orange slip dresses, bright green purses and shocking blue shoes.

Fall Winter 2020 proffered another profusion of bright colour, this time in the form of lurid lime green, or “kiwi” as the House put it, and a pink so shocking we think Ms Schiaparelli would be jealous. Will the establishment take to this searing new palette? Of course they will, because Lee has a talent of tempering the vulgarity of colour with a coolness only few can muster. Take the lime green shirt and bag and and black suit, for example. Black and lime green? A loathsome colour combination for most. But when cut simply and flashed delicately – a mere kick of cuff and marvellous macramé – the colour co-ord veers off the verge of le vulgar and into le vogue. 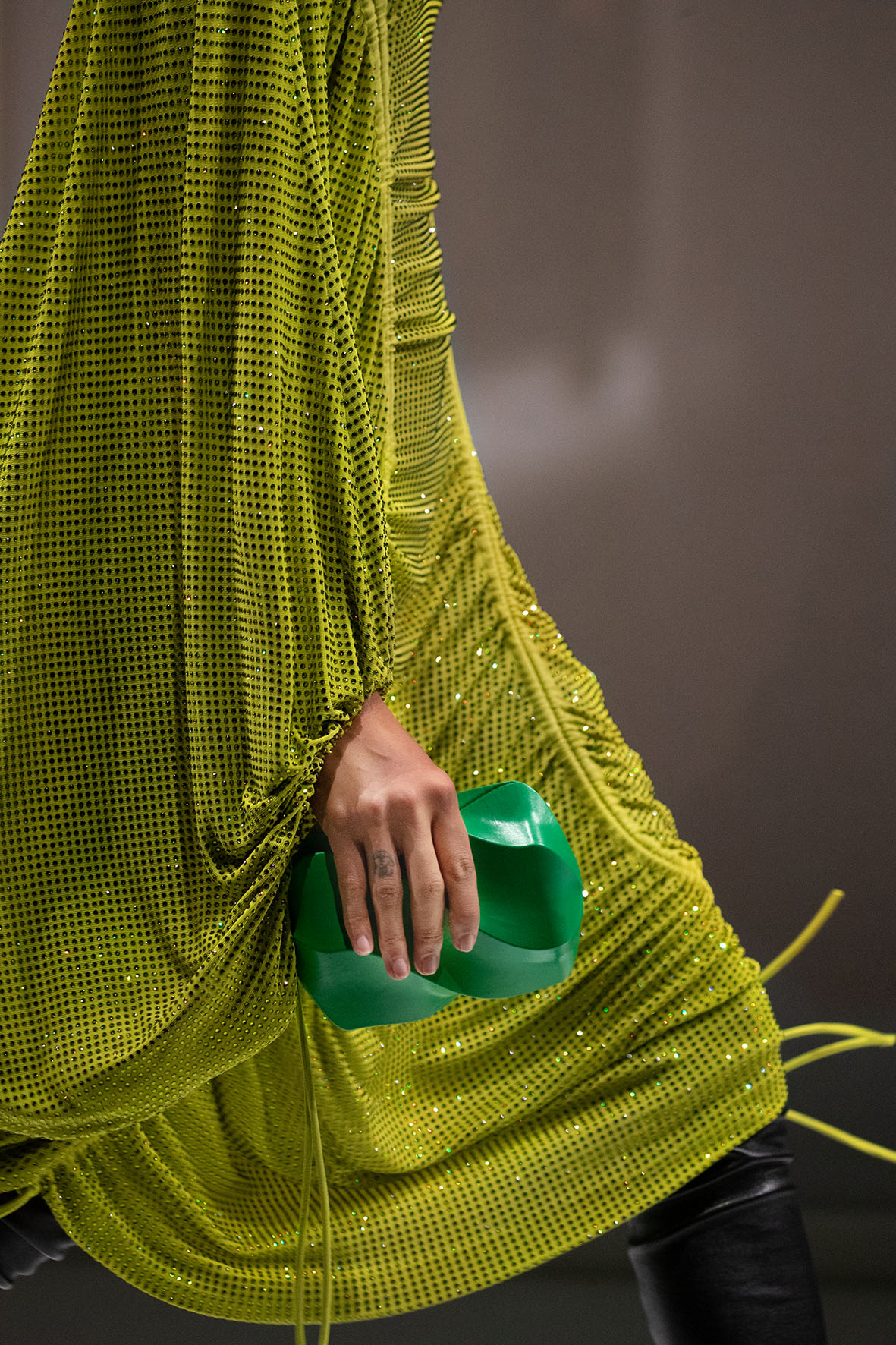 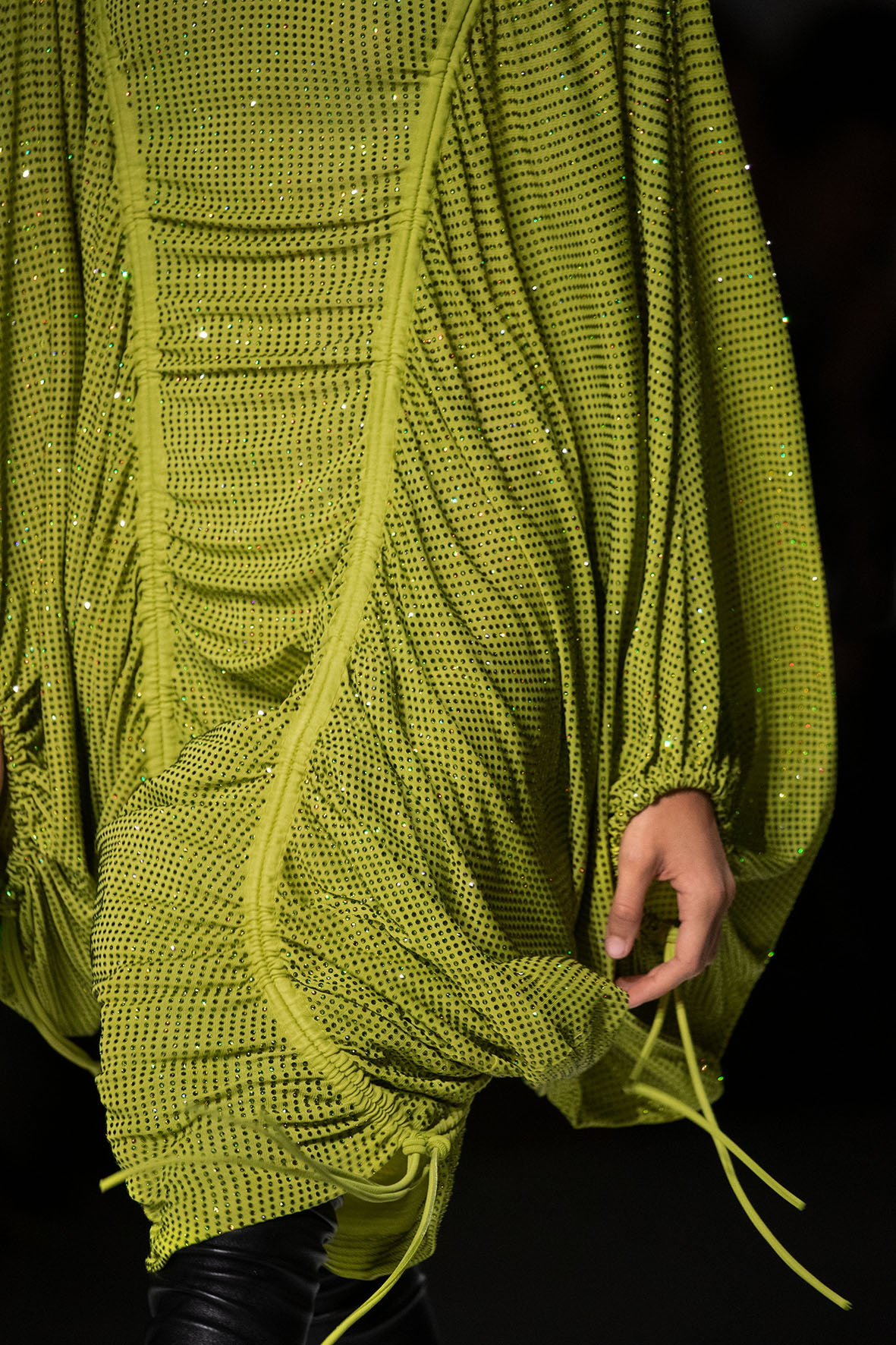 But while the collection bore Bottega’s Lee-isms – slick trenches, sharp suiting, diamond detailing and the jewellery-as-clothing equation (of which he ostensibly began with footwear and has since transitioned into clothing) – it was a refreshing pivot into new unchartered territory. The more overt sexualisation was gone, for one. The scant sequinned dresses, slippery silk shirting and sexy mules replaced by hefty silhouette and heavy layering. It was a welcome physicality, both robust and restrained, and one that perhaps best reflect’s Lee’s aptitude for technicality and engineering. Besides, the streets were getting far too heavy with padded pumps and puffy pouches – and when the fakes are coming in thick and fast you know you need to change it up a little. (Here’s hoping this new directional volume deters the copycats and the wannabes).

If they do subscribe, however, they will likely be clomping around in his cumbersome cowboy boots and deliciously ugly Croc-like footwear (which are in fact 100% biodegradable). While the clog-esque booting will be divisive, the cowboy boots will no doubt have the most commercial appeal – they even had a touch of the Karl’s with their sharp Cuban heel and clean lines. As for his leather goods, they have long been fêted as architectural triumphs and this forthcoming collection is just an extension of such craftsmanship; pouches are double-faced meaning their interior is as deftly crafted as their exterior.

Lee has been frequenting La Scala a lot, a lover of dance, in all its forms. This voyeuristic pleasure he takes from performance was distilled into his work, the collection having a clear kineticism throughout. There was the brilliant shearling fringing which danced like thick octopi legs as models walked, the shredded lengths of leather that gushed from intrecciato clutches, and the ripped-up red flares which rippled powerfully. But as much as movement was integral to the collection’s form and function, ease, too, was on Lee’s mind. “How do we put ourselves together in a considered, elegant way but still feel comfortable?”, a question he asked himself at the beginning of his Fall 2020 exploration. This also tied back to the theme of movement, and was expressed in “stretch and cling” as the contours were explored fully with gentle tones of stocking and bandage that recalled the natural twist and bend of the body. It was luxurious comfort and cosy warmth that you could both foxtrot in or do a dash of ballet, both elongated and eloquent.

As he continues to reconstruct Bottega Veneta his way, perhaps above all else, Fall Winter 2020 proves Daniel Lee is here to stay. It’s a powerful bearer on Lee’s legacy: he’s around for a long time, not a good, quick, Instagram-happy time, as many had pondered all the way back in 2018. Remember, a lot can happen in a fashion year. 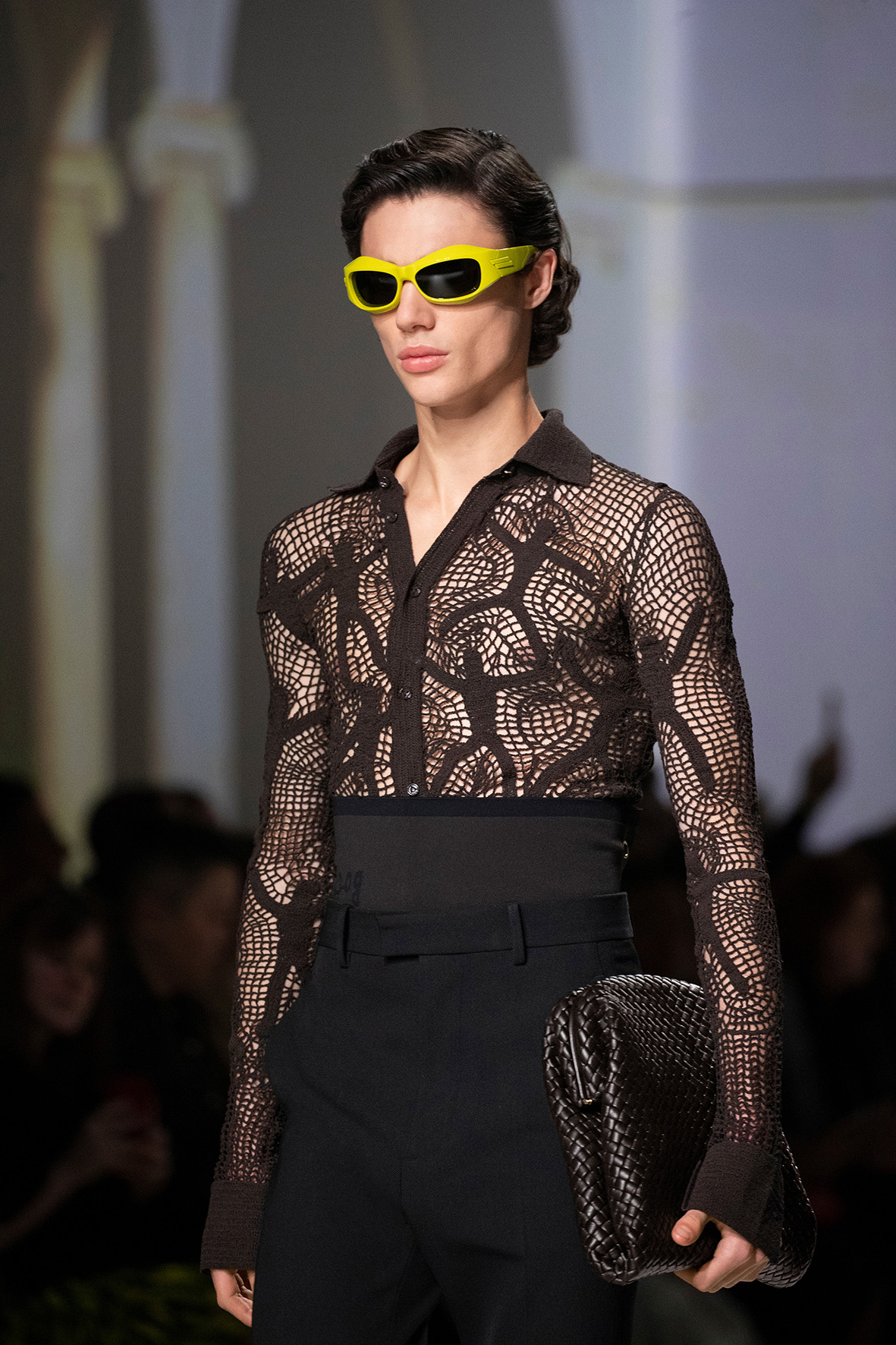