We asked the By Johnny founder whose runway show was the toast of Australian Fashion Week 2016 to keep a photo diary of his recent o/s jaunt. Here's the result

“I had organised to shoot an online campaign while I was in New York City, which will feature on our social media channels over the Australian spring and summer,” says Schembri to explain the first portion of his Tour USA holiday.

“I put together an all-Australian team for the photo shoot consisting of my dear friend and photographer Daniella Haggar and Los Angeles-based Australian hair and make-up artist stylist Di Dusting. I felt very lucky to work with these talented ladies – I’ve known them for many years and love that we could together to take [By Johnny] to a new place.”

“After that, I spent the 4th of July holiday with friends in Florida, starting off in Fort Lauderdale, then making our way to Miami for a few days before I flew home via a stopover in Los Angeles.” NEW YORK: Streets of Soho Daniella and I scouted locations in the days prior to the shoot and began working out the logistics for the day. First stop: the cobbled streets of Soho. NEW YORK: Still Scouting We made our way through the busy streets of Little Italy and China Town. Both had an electric vibe with crowds of people in the streets – perfect locations for our New York City Streets shoot. NEW YORK: Shoot Day This was taken outside a ‘speak-easy’ restaurant called Esquina in Lower Manhattan. The storefront is set up like an old-time diner and has an underground bar. The set up was very cool. We stopped here for lunch. NEW YORK: Fashion hit During my trip I visited the MANUS X MACHINA Exhibition at the Metropolitan Museum. It was really interesting seeing all the different approaches to fashion from an array of international designers. NEW YORK: The dream team Our model on shoot day was Gabriella Lopez from IMG. Here in the photo we have makeup artist Di. There was a lot of construction going in here in the Meatpacking District – it made a nice bold back drop for our shots. NEW YORK: One stop shop I had some phone problems while in NYC, so we decided to kill two birds with one stone and went to the Apple store in the famous Grand Central Station. Fort Lauderdale: Wild skies The day we arrived it was very cloudy. Not an ideal beach day. Fort Lauderdale: Star spangled Everywhere we went there were American flags and colours for the 4th of July Holiday celebrations. This is an example of some of the sweets, cookies and cakes that were in the local grocery stores. Miami: Picture postcard When I arrived in Miami all I saw was blue skies, pastel buildings and flashy cars. It reminded me of the movie The Birdcage starring the late Robin Williams. Miami: Sun worship An image of South Beach, where I spent most of my days there working on my tan. Los Angeles: Comedy Value One of my best friends Zac turned up at the airport in LA with a name card for me. He is a very funny guy. Los Angeles: wild ride I was lucky enough to catch a ride over to Palm Springs with a friend of mine who is studying to be a pilot. He hired a plane for the day and used us as passengers to increase his flying hours. It was a bumpy ride. Palm Springs: night raid Everything closes here quite early, so the only thing we could find open late was a convenience store. We raided the confectionary aisle. Palm Springs: retro camp Downtown is full of camp, retro furniture and jewellery stores. These are some of the psychedelic resin pieces I came across.

Orange County: Shades of home I only spent a short time at Laguna Beach but it reminded me a lot of Noosa in Australia. It was a very quiet beach town with a relaxed Californian vibe. Los Angeles: daggy dining We had breakfast at The London. I loved the interesting mix of materials in the interior; gold mixed with pastels and off-coloured greens. It reminded a daggy RSL, made new. Los Angeles: Best Italian in Cali This is my favourite pizza and pasta place in LA. The owners also have a place called Sun of a Gun which does amazing deep fried chicken burgers. Los Angeles: Celebrity heads On one of my last days, I went to Venice beach where a friend of mine, Alberto is a milliner. I visited his workshop and had him show me his headwear blocks, designs and the different materials he is using. Los Angeles: LAX -> SYD Shot from the plane. This was my window view from the plane looking at the LA light grid whilst beginning my flight home. 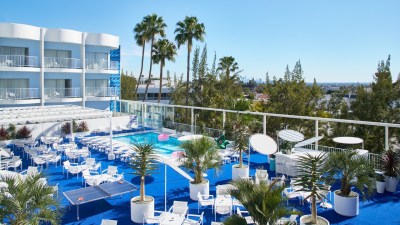