Reprising another thespian role, the “Alice Through The Looking Glass” actress took her cranky Red Queen character home with her Terse. Laconic. Cranky. Abrupt. Brilliant. They are all words that have been used to describe Helena Bonham Carter’s performance as the Red Queen in her latest film, the Tim Burton-produced Alice Through The Looking Glass.

Burton, of course, is the actress’ ex-husband of 13 years, a relationship that worked as the couple lived in adjoined houses. “My house looked like something out of Beatrix Potter,” the actress told Vanity Fair in September 2015. “But if you go over to his house, you’re in a totally different place. He’s got slime balls and dead Oompa-Loopas lying around, and skeletons and weird alien lights.” Curious is definitely a way to describe how we feel about Carter. But as the couple work together again for the Alice In Wonderland sequel, it’s not Mia Wasikowka, Johnny Depp, Anne Hathaway or Tim Burton’s theatrics that take centre stage; it’s the 50 year old actress. Critics have described Carter has the star of the trippy world Burton built; an eccentric, bombastic character that audiences will want to return to Underland for. A large part of getting into character though came down to the costumes, the actress told The National Post. And while the studio lights were hot and the hoops skirts heavy, Carter – a part-time method actress – says the biggest challenge for those around her was putting up with her for the duration of the filming. “Red Queen is always deliberating and she has no edit button,” says Carter. “And, inevitably you do take the character home with you. I think people did notice that I was being quite abrupt.”

“Her colour palette is still red, and her primary costume, the organic red vines dress, is the same one from Alice In Wonderland but is now dishevelled and torn in places,” says Atwood.

“She is trying desperately to keep up her physical appearance but is failing miserably. It looks as if she’s been dragging her dress around the Outlands for the past three years.” The story tells of Alice’s (Australian actress Wasikowska) return to Underland, this time through a mirror. In a desperate search through time for the Mad Hatter’s (Depp) family, we learn of the real reason the Red Queen’s head became so big.

“When Iracebeth is heading into battle, she looks like she did in the first film but with the addition of armour made from a sculpted thorn heart, thorn heart armbands and beautiful embroidered sleeves with a crazy kind of military hoop skirt,” says Atwood. Alice Through The Looking Glass is in cinemas now. 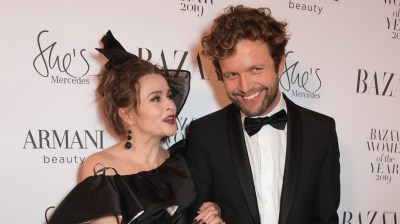