We went digging for everything on Alev Aydin

It seems baby fever is ongoing in 2021 with the announcement that Halsey is pregnant. She took to Instagram on Wednesday to confirm the news with two sweet baby bump pics. Her boyfriend and baby daddy Alev Aydin commented, “Heart so full, I love you, sweetness.” The ‘Without Me’ artist has seen many serious relationships in the spotlight including Yungblud and American Horror Story actor Evan Peters, but this latest love has been more so under the radar.

For those unacquainted, Alev Aydin is a screenwriter with credits on the 2017 Small Shots, Controller and HipMen: Los Angeles. The man’s Instagram, under the username @zoneaydin is relatively unassuming. It is unknown when Aydin and Halsey first started dating however some careful scrolling places the pair as longtime friends at a basketball game in the Staples Centre in January, 2019.

“Back when I did a very cool thing I’ll prob never get to do again – massive thanks @iamhalsey for the courtside experience,” Aydin captioned the post. “Only ones not on our phones, actually watching the game.”

Officially speaking, Halsey and Aydin were first spotted by Daily Mail in October 2020. The duo were pictured picking up art supplies though the pap shots were vague as to whether they had properly linked up.

Further internet digging reveals the pair got matching tattoos which depicts “SEEDS” in June, 2020. At the time one clued-in fan noticed that the week they got their tattoo was “cosmically the best week to plant a seed.”

The couple “have been dating for several months,” according to a People source. “Halsey has been low-key about their relationship,” the insider continued. “They were spending a lot of time at her house in the fall though, and it was obvious that she was happy.”

Congratulations to the happy couple! 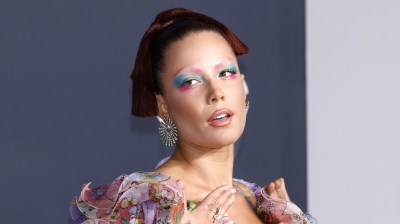