Gucci’s new Cruise collaborator? One of the world’s most famous hotels

For Resort 2019, Gucci checks in to the Chateau Marmont by way of Les Alyscamps in Arles, France 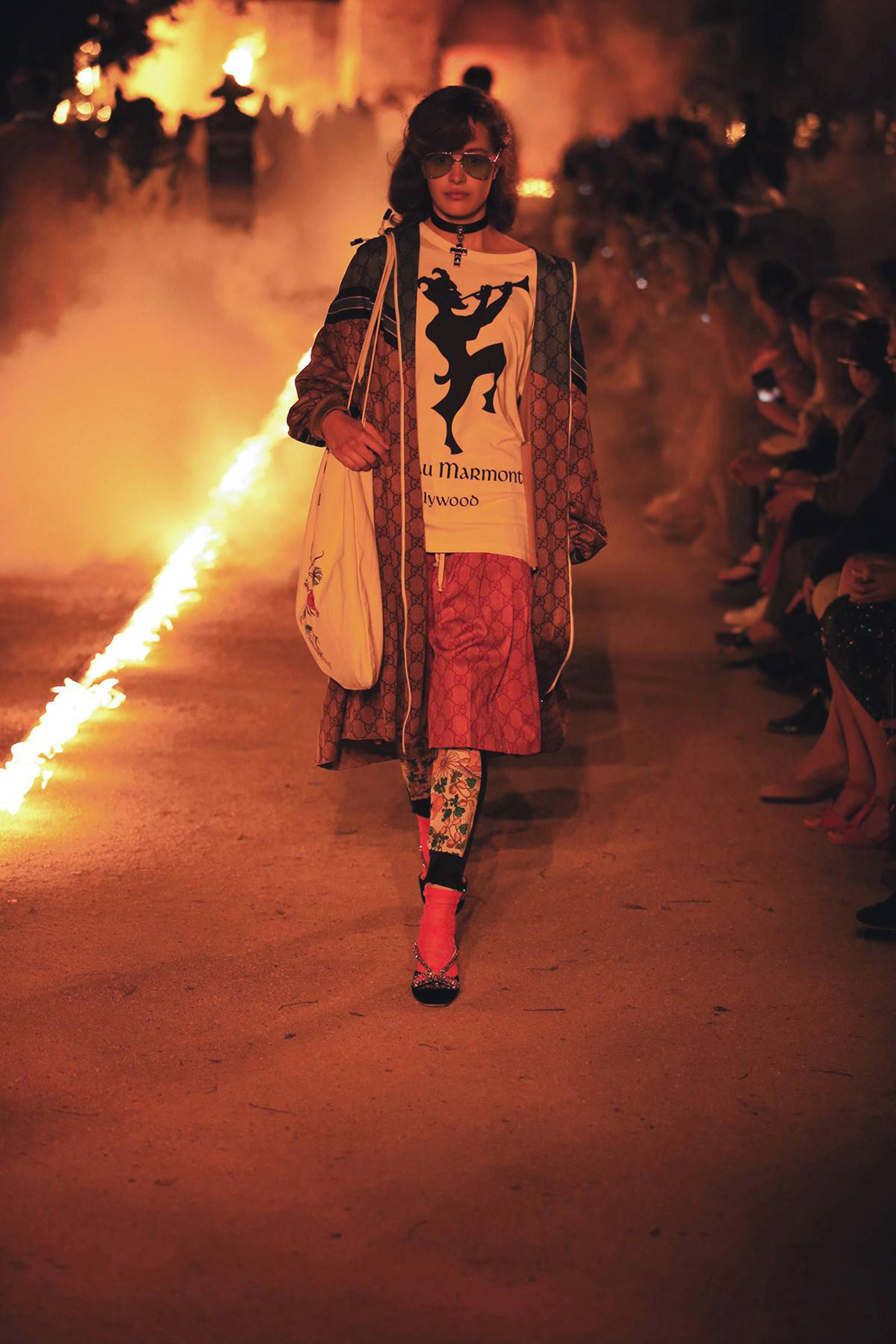 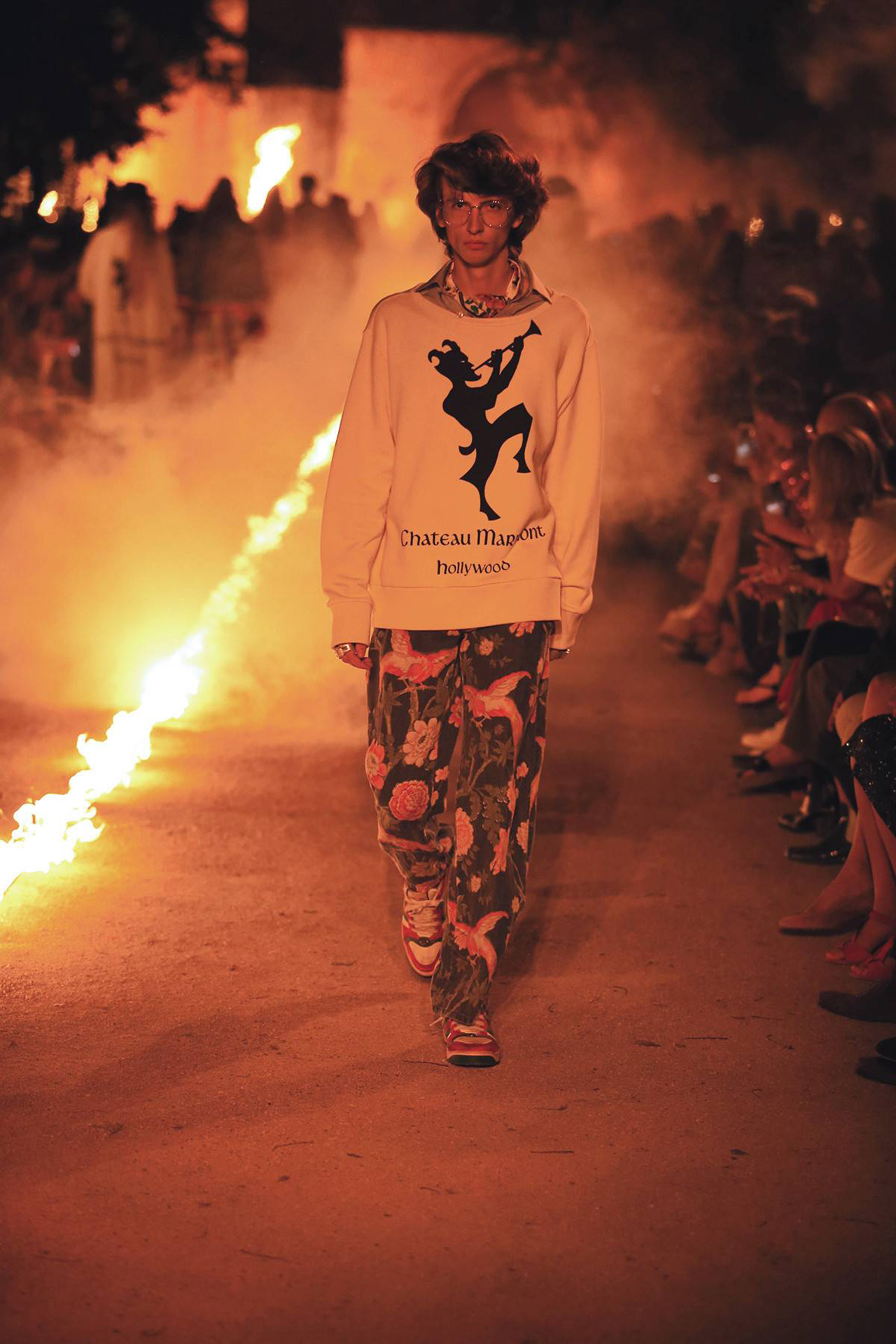 “It’s a party in a place where everyone can be someone else,” said Alessandro Michele. “Widows and kids playing rock stars, ladies who are not ladies”. Though he claims to have been inspired by the idea of a rave in a cemetery, Gucci’s creative director could just as easily have been describing another location that featured prominently (albeit more subtly) in today’s Resort 2019 show on the Promenade Des Alyscamps in Arles, a city in the South of France.

A Roman necropolis turned promenade from the 18th century onward, the Alyscamps gave Michele a chance to indulge in the kind of trompe-l’œil trickery and hybridised dual meanings that we’ve come to expect from his exhaustive, esoteric ready-to-wear collections. A fixation with death was supposedly the driving force behind the prolific Michele’s latest opus. Some of the most astonishing looks took their stylistic cues from the gilded ossuaries of 15th century cardinals and monks, from mourning widows, traditional Japanese dress or the signs and symbols of ancient gravestones – a collared gown featured an ornate encrusted ribcage being one such show-stopping ensemble.

“[The] idea is that everything that is linked to the afterlife is accompanied by something of maximum beauty,” Michele said of the moribund mash-up. Though the off-piste location in France threatened to overwhelm the show’s narrative, another vision of an altogether different necropolis lingered just beneath the clouds of fog and flame that lined the runway.

Woven throughout the collection were pieces that directly to the designer’s fascination with cinema, and the golden aura of Hollywood in particular. It’s an affinity that has long been evident in Michele’s work; to date, the designer has taken us to the Paramount Pictures lot and released an entire publication in homage to the Italian filmmaker Dario Argento. Who could also forget the special effect that Autumn Winter 2018’s cinematic prosthetics had on the industry? In recent years, Michele has also hinted at his predilection for a certain style of Hollywood Hills accomodation in the top handle ‘Marmont’ bag, and today that subtle reference took on another of the designer’s preferred double meanings.

“There is a different kind of fashion and beauty, that’s complex, it’s an aesthetic anarchy where everyone belongs”, he said.

No matter how seemingly impenetrable Michele’s runway collections appear at first, the designer’s official collaboration with the overtly mythologised hotel from which that bag derives its name, however, is as good a sign as any that he isn’t checking out of the commercially-savvy merch game any time soon. The inclusion of Chateau Marmont merchanidse in a show riddled with dualities suggests something else at play beneath the logo-clad surface: from the spirit of Hollywood legends old and new that have taken up residence there, to those that have died there, to the fact that the hotel itself is a simulacra of a French château transplanted into the middle of a sprawling metropolis. An image of a satyr that features as the hotel’s logo, as well as on the bar’s cocktail stirrers, was emblazoned across tee and sweatshirts. Laundry and shoulder bags bearing the hotel’s name will doubtlessly compile quick cross-cultural cachet that will also translate at the register. In the Greek and Roman myths that Michele is so fond of drawing on, the creature – a hedonistic hybrid of man and goat – acted as the lustful companion to the god of wine. Satyrs were said to drunkenly roaming in droves in search of the next great party, recruiting a band of ardent followers along the way.

Dual identities, aesthetic anarchy, hapless devotees who’re blind for love – what could be more LA, or more Michele, than that?