SHOT BY THE MULLANE BROS.

AUSTRALIA: In 2016, GRAZIA began a beautiful little live music series called GRAZIA Sounds atop a penthouse in Milsons Point in Sydney. One of the musicians who performed a cover of Rihanna’s “Stay” was Ben Abraham. Sifting through the GRAZIA archives today, I stumbled upon his performance. No matter what you’re doing tonight – cooking, playing a board game, getting ready for bed or just sitting down – push play on Abraham’s rendition.

Abraham sort of stumbled into music himself. After a short stint at the pop genre, he was working at the Children’s Hospital and three weeks into the job when he picked up a rusty old guitar and, with a 13-year-old girl battling anorexia, wrote a song. “It was this great moment of songwriting with a kid,” explains Abraham. “My role was not just about being the most impressive singer in the room, it was telling the story of someone else’s life. People weren’t like, ‘Oh, you’re such a great singer’ but rather, ‘Oh man, that was a powerful story.” On this night, some years on from that day at the hospital, Abraham picks up just a guitar again and transforms Rihanna’s “Stay” as if it were his own. And as if he were telling yet another powerful story.

Since this capture, he went on to co-write Kesha’s mega hit “Praying”. 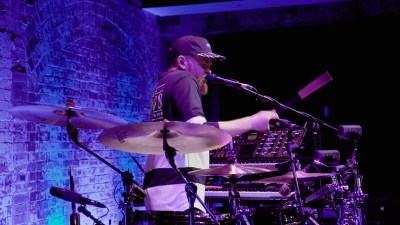