To celebrate the digital, DVD and Blu-ray release of one of the most affecting films for young people of 2018, Nick Robinson chatted with GRAZIA

Love, Simon: The heart-warming and tender coming-of-age story follows a young man, Simon Spier (played by Nick Robinson) as he navigates high-school, his own identity and the opinions of those around him. The 17-year-old hasn’t told anybody he’s gay and he doesn’t actually know the identity of the anonymous classmate he’s fallen for online. It’s when the closeted teen’s secret is threatened, however, that he must face his truth. GRAZIA caught up with Robinson and chatted playing a gay character, working with Jennifer Garner and Josh Duhamel and re-writing the teen rom-com genre.

GRAZIA: Tell us about Simon.

Robinson: “I think Simon is someone who knows who he is. But he’s just not ready for the world to know. So he basically organises his whole life around the fact he doesn’t want people to know he’s gay. And that really informs most of his day-to-day life and decision-making and thought processing.”

He’s planning to come out at some point…

“I think he’s dead-set on going to college and then becoming who he wants to be on his own terms. He wants to remain in control for as long as possible.

“As I think most people can attest to, the best laid plans don’t always work out the way you want.”

“So then he’s someone who has to come to terms with the fact he didn’t get to tell his story exactly how he wanted to. But he eventually owns it. And he uses it to his advantage.”

“Yeah, I think it’s really funny! And there were some great comedic actors in the film. Tony Hale plays the Vice Principal and he is, like, uproarious. I think that one of the strengths of the film is that it isn’t just one thing. It’s not a drama, it’s not a comedy, it’s not a romance, it’s sort of a mixed bag of all of these different genres and ideas that I think make it very true to life.” How did you first get involved with the film?

“I heard about it through Greg, our director. And he brought me in to have a meeting and we sat down and he outlined his ideas for the script and the story and character. It was a fairly quick process. I think Greg knew what he was looking for so he was able to kind of expedite things.”

What appealed to you about the project?

“A number of things. I am a big fan of those sort of John Hughes-esque coming-of-age films.  And I felt like this kind of fit that mold pretty well. And on top of that, it was telling a story that hadn’t been told before from this perspective; from a young gay man’s perspective in high school. Usually that character is the sidekick or something.”

You mentioned John Hughes. Are there any particular films that you would say are in the ‘DNA’ of Love, Simon?

“There are elements of The Breakfast Club, Ferris Bueller’s Day Off, Pretty in Pink, all of those high school-centric comedy dramas. Also, I think that there’s elements of Tootsie too – that was one Greg mentioned which I liked.”

“Yeah, I hadn’t seen it that way before, but just someone who’s struggling with keeping their identity a secret and trying to keep 15 balls in the air at the same time in order to do that.  And then eventually it becomes too much for one person to handle and it all falls apart.”

In the film, Simon has a close-knit group of friends. Did you know many of the cast beforehand?

“Not really. I knew Logan who plays Martin. But he’s not really in Simon’s immediate social circle. Of the core group of friends, no, I didn’t know anyone. But I got to know everyone pretty well and it’s been a pleasure. Greg had a rehearsal period beforehand. So we had about two weeks to get to know one another, get past the icebreakers and actually get into the work.  By the time we started shooting, we had already developed a relationship.”

What did you find the biggest challenge in making this film?

“I think for me the biggest challenge in making this was trying to ensure the movie had a point of view but was also as accessible as possible. I think the large point of this movie is that it can reach people that maybe normally wouldn’t go out to see a film about this character. So I wanted to make the character specific enough that he feels real, but not so pointed or specific that he’s narrow in his appeal.”

Would it be fair to say that not only Simon, but his friends too, are working out who they are?

“Yeah, absolutely. I feel like this movie is all about finding your identity and it’s something that every character deals with. Basically, the way they feel inside versus the way they present themselves to the world. Those two ideas don’t always match up. I think the film is a journey to kind of meet in the middle of these two intersections of how you present yourself and how you feel and if there’s a way to do both of those at the same time. I think one of the reasons there’ve been so many movies about high school is because it’s a time in your life where you’re feeling a lot of emotions – love, heartbreak, loss – perhaps for the first time.”

And those emotions, being new and raw, can be pretty intense…

“Yeah. Jack Antonoff [who is the Executive Producer on the Love, Simon soundtrack] was actually talking about this.

“[Jack Antonoff] said high-school is a time when you’re desperately trying to pronounce who you are to the world, but you don’t really have the tools to do that.”

“So it’s just a big ol’ stew of trial and error and emotions.”

Talking of which, you have some big emotional scenes with your ‘movie parents’, Jennifer Garner and Josh Duhamel. How was working with these two experienced actors?

“It was great! Yeah, they are both so experienced. But different. Jen is very maternal. She has a very maternal instinct and so she’s always making sure everyone’s okay. And Josh is sort of a practical joker. So he keeps everybody on their toes. And they were both… well, I couldn’t think of a cooler set of parents than those two right there.” You have some powerful scenes with both. Did you feel nervous or excited?

“Honestly, it was dread. It’s just pure dread! [Laughs] But then once you actually start doing the scene, it starts to sort of untangle itself and the scene kind of unfolds, especially when you’re working with such professionals. It doesn’t really feel like there’s a whole lot of ceremony behind it. It’s kind of this very straight-forward and safe environment to explore and have fun. And make mistakes!”

LOVE, SIMON IS NOW AVAILABLE TO BUY OR RENT ON BLU-RAY, DVD & DIGITAL. 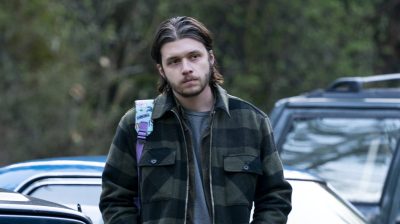