Brandon Maxwell is typically the man behind the impossibly glamorous gowns you see on the red carpet. There’s been Michelle Obama’s strapless cream column dress at a 2016 State Dinner at the White House, Lady Gaga’s magenta pink extravaganza at the 2019 Met Gala (replete with behemoth bustle and mile-long train), and Meghan Markle’s canary yellow sheath dress at the Your Commonwealth Youth Challenge reception in London. Basically, if the red carpet calls, Maxwell is your guy. However, over the weekend, he presented a Spring 2020 collection which was unusually geared for the daytime – as oppose to the disco or after-hours affair.

Of course, the brilliant gowns remained – an asymmetrical dress in textured mustard, impossible puff skirts and deconstructed champagne silk on a very svelte Candice Swanepoel – but the collection was anchored in daytime garb; leather, light knits, relaxed tailoring and denim, which was in abundance. Bella Hadid swanned out bronzed and blonde in a pair of slim blue jeans, compete with an equally relaxed knit, shirt, blazer combo (and tote swung nonchalantly across her shoulders). Stella Maxwell followed with a boyfriend style jean thrashed at the knee. Then came the denim jumpsuit; cuffed at the elbow and plunging to the navel, it even popped at the collar (daytime with a dash of drama). A plethora of jeans followed; slouchy, tapered, some with a kick hem, most were cinched with belts bejewelled in coloured gemstones, again a nod to the man with decadent proclivities. But denim aside, other casual accents played out; large totes, button-down shirting, short-shorts and miniskirts all made up Maxwell’s new mood.

Even his sumptuous evening wear had a slightly informal feel; slinky gowns were deconstructed with precarious cut-outs, broad ball-gown skirts were constructed in thick striped cotton or subverted with casual sleeveless shirts, even a splendid top-cum-cape in taffy pink revealed red leather pants as oppose to a formal bottom, indicative of Maxwell’s new mood. Then there was the ultimate high meets low pairing; a bustier with sweeping train and pair of jeans.

But despite the decidedly casual tone, Maxwell’s use of colour remained irrepressible. Shimmering and brilliant, silk and jersey took form in dazzling red and contrast pink, apple green, champagne and butter, there was both contrast block colour and similar shades that sat side by side.

Above all else, the appeal of the collection was its attitude. Even in jeans and a knit, Brandon Maxwell’s girls can do anything – and still look glamorous doing so. 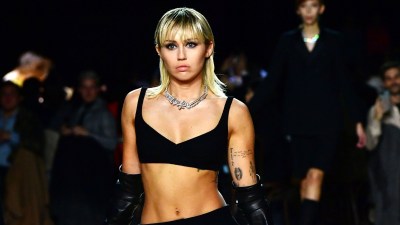 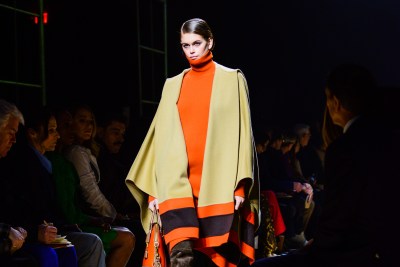 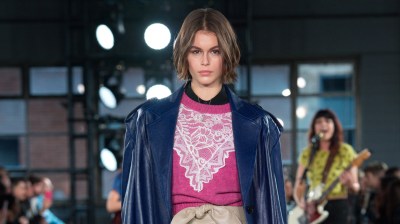 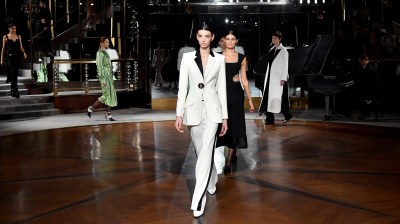 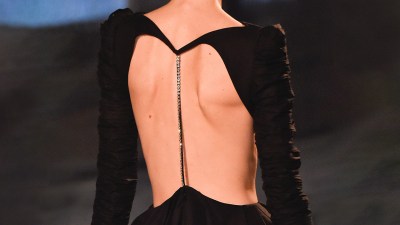 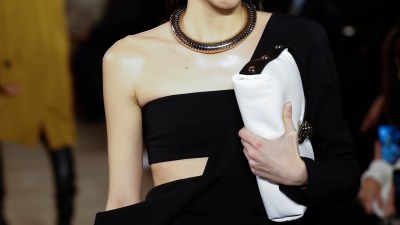