Twitter’s reigning queen, Chrissy Teigen, has officially quit the social media platform. The 35-year-old, who is renowned for her often-hilarious and outspoken posts on Twitter, has shut down her account, citing ongoing negativity from fellow users and a “fear of pissing people off”. She took to her account to post a final goodbye to her followers, before closing her account not long after.

“For over 10 years, you guys have been my world. I honestly owe so much to this world we have created here. I truly consider so many of you my actual friends,” the model wrote. “But it’s time for me to say goodbye. This no longer serves me as positively as it serves me negatively, and I think that’s the right time to call something.”

Although Teigen had become synonymous for her witty replies to trolls and detractors on Twitter, the Cravings author said that upsetting people causes her “pain” and is something she wants to move away from. “I’ve always been portrayed as the strong clap back girl but I’m just not,” she admitted.

Although Teigen has temporarily closed her account before, this time she says it’s permanent after experiencing one too many emotional blows from trolls. “For years I have taken so many small, 2-follower count punches that at this point, I am honestly deeply bruised,” she wrote. “I’m just a sensitive shit, okay!? I don’t wanna be this way! I just am! But I love you guys and I cherish our time together, I truly do. I also hate you.”

Twitter lost another prolific celebrity Tweeter in actor Alec Baldwin, who said he was quitting the platform for similar reasons to Teigen. “You can’t do any irony on Twitter, you can’t do irony in the United States anymore because the United States is such an uptight, stressed-out place and such an unpleasant place right now,” he explained at the time. 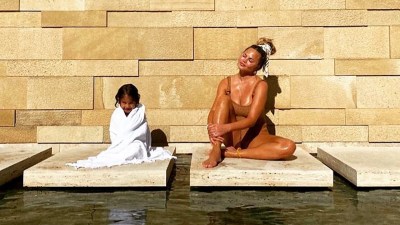 Thanksgiving Looks A Little Different This Year
Next page