If you’ve already blown through The Crown, we have your newest fix. Bridgerton is a new period series based on Julia Quinn’s bestselling novels that follows the competitive world of Regency London high society and when debutantes are presented at court.

The drama, which premiered on Netflix on Christmas Day, centres on the Bridgerton family: Violet, Lady Bridgerton; her four sons, our sons, Anthony, Benedict, Colin and Gregory and her four daughters, Daphne, Eloise, Francesca and Hyacinth. Also featured are the Featheringtons: Portia, Lady Featherington; her husband the Baron; and their three daughters, Philippa, Prudence and Penelope.

Already renewed for a second season, Netflix claims the series is projected to stream in 63 million households in its first 28 days

Let’s break it down why Bridgerton has quickly become our latest obsession. 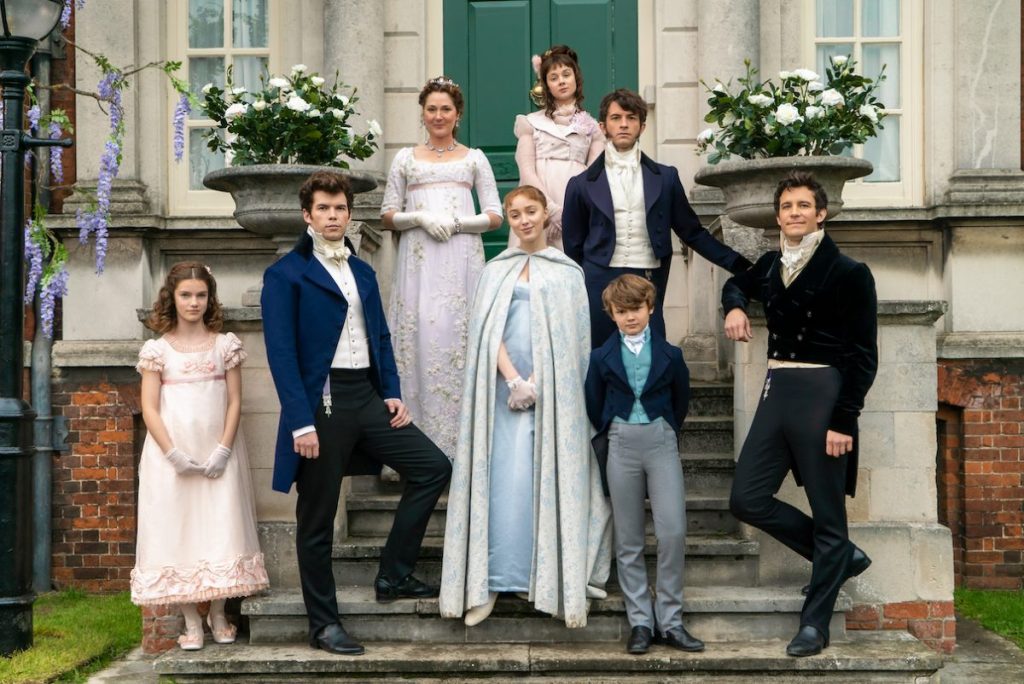 In a juicy Jane Austen meets Scandal like mashup, there is so much drama to unpack in the show’s first season. The primary storyline revolves around Daphne (Phoebe Dynevor), the eldest Bridgerton daughter, as she enters the marriage market which involves a series of parties and dances where young women are introduced to young men, who later call on their favourites at home to be examined by their families for suitability. (Geez, and we thought dating in 2021 was hard). Daphne gains the favour of Queen Charlotte, well-connected and gossip-loving HBIC which makes her the object of much chatter, unfortunately, her eldest brother Anthony scared off the men vying for her affection and Daphne quickly found herself with little-to-no options for her future. To try to keep up her good bachelorette standing, Daphne hatches a plan with hot duke named Simon who loves the single life (more on him later….) and needs a way to fend off the family who keep trying to get him to marry. Spoiler alert, feelings are caught.

All the other Bridgerton siblings have their own issues going on, including Anthony who is dating an opera singer from the wrong side of the carriage tracks; Eloise, who is so over the marriage thing; and artsy Benedict who focuses on his career ambitions. Then there is a whole other bougie family, the Featheringtons which includes daughter Penelope who is crushing on best guy friend, the unlucky in love eldest, Prudence, and a young relative named Marina who has a mysterious past that is following her.

Although we never see her onscreen, legendary actress Julie Andrews plays a pivotal role voicing Lady Whistledown, the author of a scandalous society newsletter whose true motives aren’t unveiled until the season finale (we won’t spoil it). The show’s Gossip Girl type, if you will, the all-knowing narrator guides us through all the drama.

Oh and did we mention the sex scenes? Like, a gratuitous amount of them and we can’t say we’re mad at it. The series has no shortage of beautiful people in its cast but Regé-Jean Page is on another level. The Zimbabwean-born Brit plays the Duke of Hastings, Bridgerton’s leading male and the love interest of Daphne. Tall, dark, and handsome, with a dash of Darcy vibes, the 31-year-old perfectly embodies the dashing eligible bachelor kind. As he strikes up the pact with Daphne to get his “will you get married already” begging family off his back, the character becomes even more charming.

But there was one scene particularly that sent social media on fire. In the early days of the couple’s courtship, the camera zooms in on the Duke seductively licking a silver spoon. Though only brief, the sexy moment has sparked social media. and led to creation of the spoon’s very own Instagram account.

If Page looks familiar, it may be because he appeared on ABC’s courtroom drama For the People and 2016’s History revival of Roots. He most recently starred alongside Tessa Thompson in the 1950s Harlem-set drama Sylvie’s Love. There are also rumours he is in talks to be the next James Bond. Set in the early 19th century, Bridgerton is a rich visual treat. Costume designer Ellen Mirojnick and series creator Chris Van Dusen purposely decided to introduce modern elements and colours into the Bridgerton costumes to give the show more of a modern quality. This meant that they could not rely on renting or purchasing pieces from costume houses, and all of the costumes for the series had to be made for the show. All told, close to 7500 pieces were made by Mirojnick and her team for the show’s first season. According to Phoebe Dynevor, her character Daphne alone has 104 different costume changes over the course of the eight episodes.

The costume designers gave the two main families two very distinct colour palettes; the Bridgertons typically wear pastels in shades of blue and pink, while the Featheringtons wear very bright colours and heavily patterned clothing that is often a shade of yellow or green. Throughout the series, the characters don 19th century embellished ballgowns, lace corsets, waistcoats, petticoats and Swarovski tiaras, although there has been much chatter about just how many conspicuous stylistic liberties were incongruous with the period in which it takes place.

Historically accurate or not, the fashion is everything. Just like the fashion, the backdrop of Bridgerton is absolutely delicious and a historic tour of various estates and parks around England. Although the series takes place in London, most street scenes were filmed in Bath or York. The grounds of Wilton House were used for Hyde Park and the grounds of Somerley were used for Hampstead Heath. Ranger’s House in Greenwich, southeast London was used for the Bridgerton House exterior and RAF Halton House in Buckinghamshire for the interior.

Wilton House, home to ​the 18th Earl and Countess of Pembroke, near Salisbury, was filmed at for the exterior of and entrance to Simon Basset’s Hastings House. Throne scenes were filmed in the house’s famous Single Cube Room, the only room in the entire estate thought to have survived the fire of 1647.  Syon House in London and Badminton House in Gloucestershire made up the rest of the estate. Simon’s Clyvedon estate was made up of Castle Howard in North Yorkshire for the exterior and Wilton House for the interior.

A combination of Hampton Court Palace, the former home of the flamboyant King Henry VIII, and Lancaster House, a stately building near Buckingham Palace, made up St. James’s Palace in the series. Holburne Museum in Bath is the site of Lady Danbury’s estate. Vauxhall Pleasure Gardens, the location of her balls, no longer exists in its entirety so the production team recreated it by combining the remaining parts with Castle Howard and Stowe Park.

Hatfield House in Hertfordshire and RAF Halton House were combined for the Featheringtons’ interior and No. 1 Royal Crescent in Bath makes up the exterior, which is meant to be Grosvenor Square in the series. The Featheringtons also go for walks through the gardens of Painshill in Cobham. 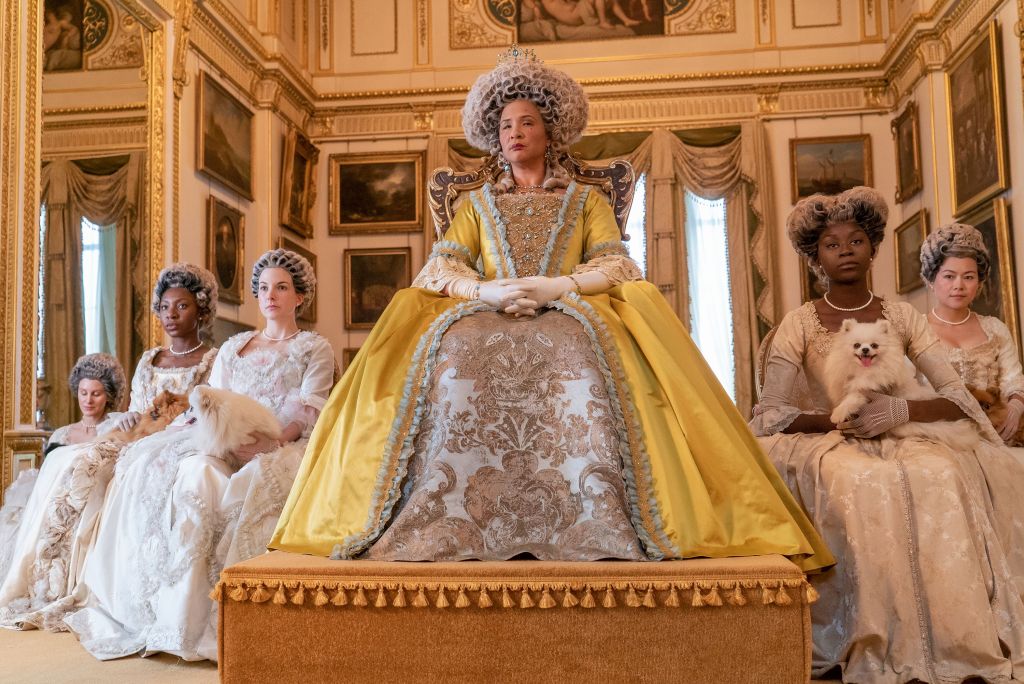 In a brilliant way of storytelling, modern songs get classical covers.for the series. Songs to get Bridgerton make-overs include Ariana Grande’s “Thank U, Next” (2018), Shawn Mendes’ “In My Blood,” Billie Eilish’s “Bad Guy,” Taylor Swift’s “Wildest Dreams” and Celeste’s “Strange.” If you listen closely during the first episode and during the ball, you will also hear a cover of “Girls Like You” by Maroon 5 featuring Cardi B.