The actor is sharing an intimate part of his life

14 years after his diagnosis, Billy Porter is sharing an intimate part of his life with the world. The 51-year-old opened up in a candid interview, in which he explained that he was first diagnosed as HIV positive in 2007. Porter kept his status from his mother as well as his team on the Emmy-winning FX drama, Pose. The Tony-award-winning actor plays Pray Tell, an HIV-positive pillar of the queer New York City ballroom scene throughout the late ’80s and early ’90s in the hit series. “There has never been a moment that I’ve not been in trauma, which is what I’ve discovered this last year. And it was my engine for a very long time. My trauma served me, my story has served me, in terms of forward motion,” Porter tells The Hollywood Reporter.

Porter spent a lot of time navigating his trauma and the shame he says he connected to his sexuality and ultimate diagnosis. He grew up in the church, which had very homophobic beliefs, even noting that they said: “HIV was God’s way of punishing gay people.” To shield his elderly mother from the kind of “persecution by her religious community because of [his] queerness” she’d experienced in the past, he initially decided he’d never tell her about his status. But because of the pandemic, he decided that it was finally time to share a this part of his life with his mother.

Porter attributed his work to why he was able to heal. “When I got Kinky Boots, the trajectory for my character, Lola, was about forgiving her father. To be given the gift of practicing forgiveness in a narrative eight times a week for three years — eight times a week, I was allowing myself to forgive my father onstage and both of them [my father and my stepfather] in the ground. Every day was another release. Then came Pose. An opportunity to work through the shame [of HIV] and where I have gotten to in this moment. And the brilliance of Pray Tell and this opportunity was that I was able to say everything that I wanted to say through a surrogate.”

The Emmy-award winner is finally seeing his hard work come to fruition and is focusing on living his life out loud. “Every single solitary dream that I ever had is coming true in this moment, all at the same time. I’m getting ready to play the fairy godmother in Cinderella. I have new music coming out. I have a memoir coming out. Pose is out. I’m directing my first film. And I’m trying to be present,” Porter says. “I’m trying to be joyful, and one of the effects of trauma is not being able to feel joy.” 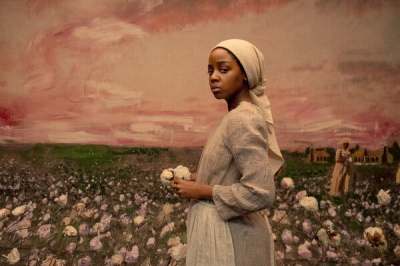