Over the past few years, articles have sporadically popped up online about the return of the belly button ring piercing. Like all good trends, this one reemerged on Tik Tok, with young Gen Zrs—too young to have experienced belly button rings in their true, Y2K glory—began posting photos and videos of their new belly bling.

In 2019, Billie Eilish debuted hers on Instagram, and that same year Hailey Bieber did too. In 2020, online retailer Etsy reported that searches for belly button jewellery had increased 20 per cent compared to the same time in 2019, listing the jewellery as one of the trends expected to increase in popularity.

Now, belly buttons have well and truly hit the mainstream. With the Northern Hemisphere’s Hot Vax Summer underway, combined with the ongoing cut out, midriff revealing trend, more and more people are heading to the piercer. But while for millennials, the reemergence of the trend evokes nostalgia, some are also left wondering whether this trend—like Tik Tok—is actually meant for them… or not?

Like most teens growing up in the 2000s, I was desperate for a belly button ring from the minute I turned 13 onwards. Britney Spears had one! Christina Aguilera had one! Janet Jackson had one! My mum, always a sucker for my begging (I even managed to persuade my way into a golden labrador puppy aged 11), eventually gave in. But she put her foot down at the pink bejewelled Playboy bunny jewellery I later bought with pocket money and successfully hid from her for close to a year.

Now, newly 30, the reminder of my youth stares at me in the mirror: a huge hole where the piercing used to be, which has never healed, nor gotten smaller despite the passing time. Desperate to avoid any temptation to post badly choreographed dances of myself on the internet, I have long resisted the pull of Tik Tok, and had packed belly button rings in the same folder: cute for the Gen Z kids whose first rodeo it is. But not cute for a 30-year-old woman. Cheugy, even.

That was, until Dua Lipa posted on Instagram last week, wearing a cute bikini, oversized printed shirt and, you guessed it, a belly button ring. I immediately hit Google, typing feverishly, ‘How old is Dua Lipa?’ The answer stared back at me: at 25, she may be on the cusp, but she’s a millennial—and significantly older than that of Eilish and Bieber.

I reached down and touched the hole where my Playboy bunny used to be. Perhaps there’s life in her yet. 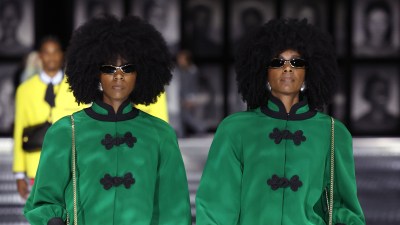 Brims, Bonnets + The Riviera. Max Mara’s Dedication To A Forgotten Muse
Next page