The Booksmart actress, who turns 29 on Friday, shared photos from the proposal on Instagram, showing Roberts down on one knee asking Feldstein to marry her in their Los Angeles backyard. “I do, bon,” Feldstein captioned the adorable gallery.

Other images in the post show the couple celebrating with friends and family, including Feldstein’s famous older brother, Jonah Hill, and fellow acting friends, Ben Platt and Kaitlyn Dever.

Sharing the news on her Instagram story, Feldstein wrote to Roberts, “You make me happier than i knew was possible. i love you.”

Since making their red carpet debut in 2019, the couple has been open about their relationship online, often sharing loved-up shots together and posting about their love for one another. While appearing on Dax Shepard’s Armchair Expert podcast, Feldstein said the pair were inseparable almost immediately upon meeting.

“We just spent every day together,” she said. “It was like, let’s have breakfast at 9 a.m. and then it would be 11 p.m. and we would be like, ‘I guess it’s not breakfast anymore and we’re still staring at each other and talking.’”

While promoting her 2019 film Booksmart, which features a love story between costar Dever’s character Amy and a classmate Hope (Diana Silvers), Feldstein said the “best” part of the love story is that the movie doesn’t make a big deal about Amy’s sexuality.

“The only love scene in the film is a queer love scene, and that’s so radical. By doing that, you’re asking that to be the norm. By showing queer sexuality and making heterosexual people relate to it is actually really deeply meaningful,” she said, adding, “for me in my life, it is a part of who I am but it is not at all my defining feature. It doesn’t mean I don’t love my girlfriend, it’s just part of who I am.”

Congrats to the hons. 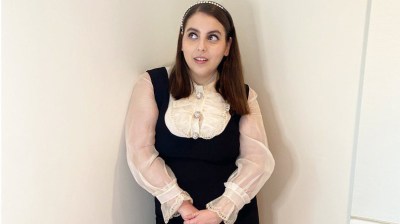