Paradise Found: One Night At The Bay Of Many Coves Resort

Heaven on Earth exists, and it's at this eco resort in New Zealand

As a writer, my job is to find the words to describe people, places, experiences and things. But sometimes, using words alone serves nothing but great injustice. Such is the case with the Bay of Many Coves Resort – an exquisite slice of paradise tucked away in the upper arc of New Zealand’s South Island. Part of the incredible Marlborough Sounds region, it’s about as close to heaven on Earth as I can imagine; unspoilt, tranquil… a garden of Eden. And I was lucky enough to spend the night. Let me try (emphasis on try) and paint you a picture. 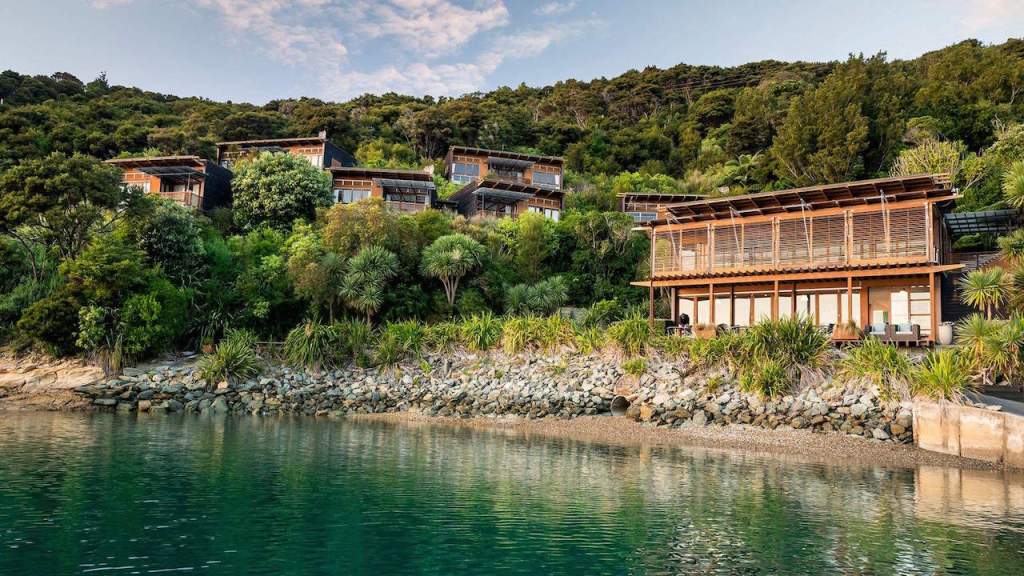 I arrived at the property by boat. Because the location is so remote, access is granted only by air or sea. If you don’t have a chopper handy, take part in a picturesque Marlborough Sounds mussel cruise from nearby town Picton (which is also worth a visit, mind you) and have them stop at the resort on the way back. Pulling up at the property’s private jetty nothing short of a pinch-me, eye-rubbing, is-this-real-life type of moment. Glassy, crystalline water melted into the shore, giving way to sprawling, lush greenery. It was a vivid kaleidoscope of turquoise and blue with no harsh lines or jarring architecture – it was as if the entire outlook was nothing more than the languid brush strokes of Claude Monet. The beauty was incredible.

I was met on the dock by Graeme – a friendly gentleman who looks after the Bay of Many Coves Resort with his wife Kim. If you stay, you’re certain to make their acquaintance (and lucky you). They live onsite as does the entire staff, and I all but asked him to hire me by the time we’d completed a quick site tour. Atop the 52 private acres of forest, we arrived at my cabin (that had played host to Clint Eastwood some weeks before). It was all my dreams manifested into reality: a cloud for a bed, the softest furnishings, a fridge stocked with the region’s finest cheese and Sauvignon Blanc. And the real showpiece: a sizeable balcony that gazed out over all the natural wonder that is the resort. Think of the clearest waters you’ve ever seen. The cleanest air you’ve ever inhaled. The softest linen you’ve ever slept on. The sweetest birdsong you’ve ever heard. Then double it. Triple it! But even this does not begin to scrape the surface of the magic that is the Bay of Many Coves Resort. 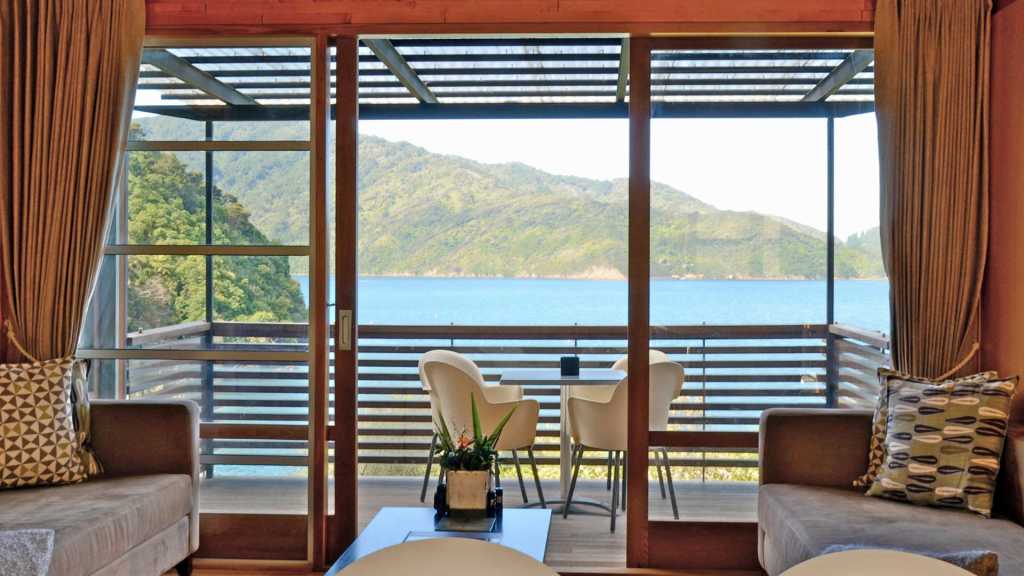 After a quick refresh (by which I mean cheese, obviously), I headed to the property’s restaurant to meet Graeme and Kim for dinner. We swapped stories over Chardonnay by the fire before sitting down to experience a menu that sat wonderfully somewhere between fine dining and the heart-warming dishes your Nanna would whip up. The restaurant sits beneath the cabins, so the view is also spectacular. We listened to birds and gentle lapping waves and watched the sun sink behind the mountains into a puddle of pink and amber.

With a full belly (and soul), I headed back to my room with strict instruction to spend half an hour in the jacuzzi (there’s one alongside a pool on site). Graeme’s only parting words were to look up. So I did, and it was magic. I’ve seen the stars, but not like that. In the absence of artificial light, I could see the creamy glow of the Milky Way as if it were a painting. The star count would have to be in the billions, and in the crisp New Zealand air, it was superb. A gaze down to the shore also confirmed something Graeme mentioned earlier: glow worms set up camp on the shore overnight, their bioluminescent haze visible to the naked eye. A little awestruck, I towelled off and wandered towards bed, even though in such a place, sleeping feels like a waste of time. 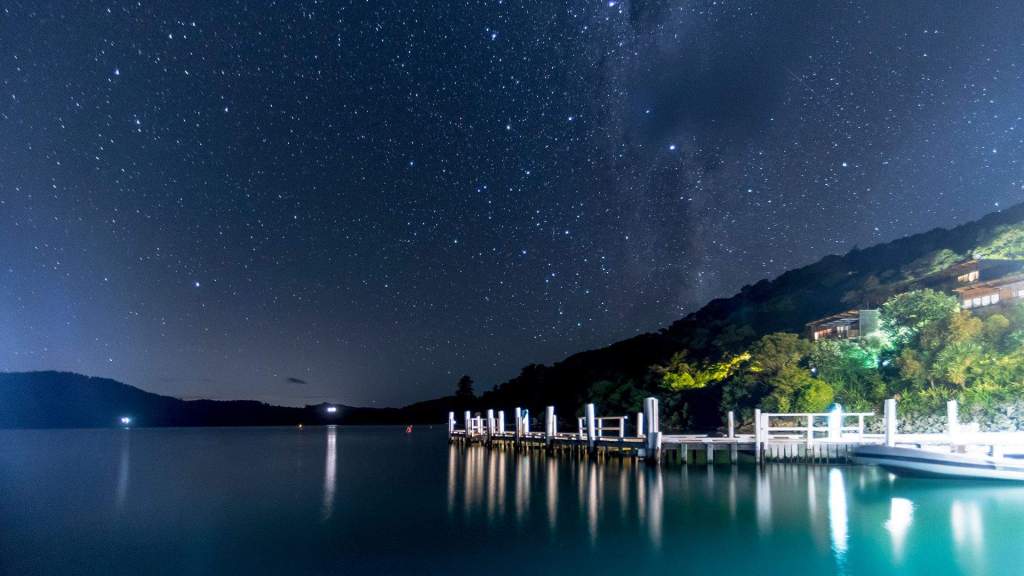 Regardless, I conclude there is unlikely a more tranquil place to rest ones head at night. The bed was less bed more cloud and swathed with french linen in shades of duck shell blue and white. The pillows were fluffy, the duvet weighty, and a spring of fresh lavender sat neatly atop it all. I slept with the windows open, because at the Bay of Many Coves, there is no mosquitoes. I know – magic.

There was no need for alarms. The dappled light filtering through sheer curtains and birdsong was more than enough. The morning presented a myriad of appealing activities: paddle boarding in the glassy bay, kayaking or a walk thorough one of the trails. I opted for a walk after a quick  sunrise espresso on the balcony (all rooms are kitted out with caffeine), only because I am not adept at water sports. It’s an uphill trek through thick mossy woods that’s leisurely but enough to increase my pulse. I finished on the private jetty, where I spent some time watching a baby seal lolling about in the shallows. Life – isn’t it grand? 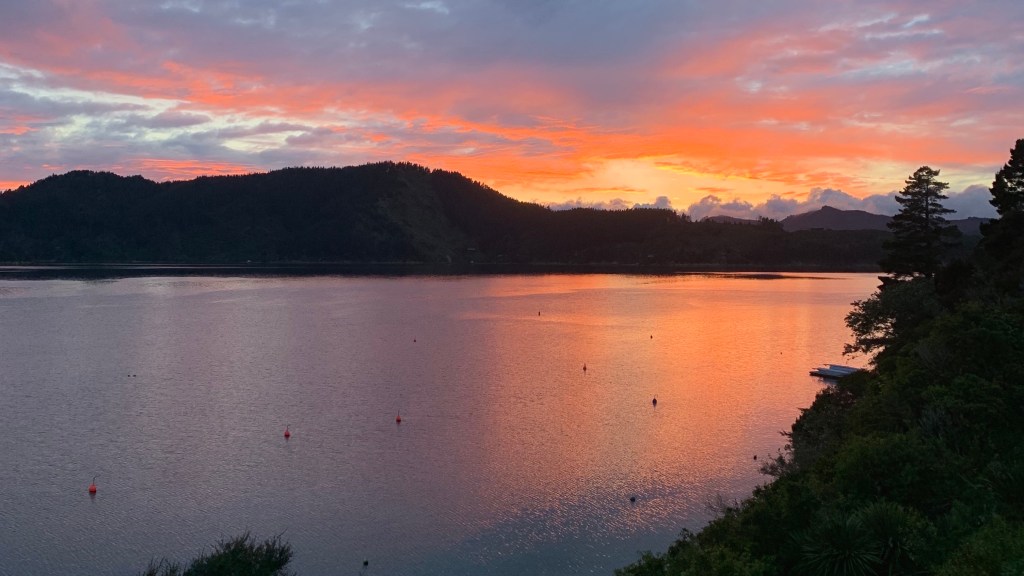 My morning wrapped up with breakfast at the cafe – bircher muesli and more coffee. Aside from the restaurant and cafe, there’s also a casual spot right on the waters edge where locals can dock their boat and stop for a spot of lunch (and a swim, weather permitting). I put it on my list.

All too quickly, my boat transfer arrived and I had to leave. Sad to go, but happy to have been. It’s a short and scenic ride back to Picton, but it felt like swapping one world for another. Seeing is believing, and even now I’m still not sure I believe my eyes. Bay of Many Coves, I’ll be back.

The Bay of Many Coves resort makes up part of the natural wonder that is Marlborough Sounds. Head to marlboroughnz.com/ for information on how to make your visit a perfect one.

White Lotus Was Great But The Fashion Was Meh
Next page