For Balenciaga‘s pre-fall 2022 collection, creative director Demna (the Georgian designer now prefers to be known mononymously in professional settings) sought out the nostalgic analogue era – or as he calls it, fashion’s forgotten years, which took place during the nu-grunge era in the late Nineties.

While many designers delve into the archives of fashion houses to create self-referential collections, Demna discovered a relatively impassive period in Balenciaga’s history, when fashion visionary Nicolas Ghesquière had yet to begin his inimitable tenure at the French house.

He decided to “fill the gap” and reimagine what the designs of the day would look like, when creatives were staunchly anti-fashion, leading to monochromatic minimalism and deconstruction, which felt at home during the underground raver scene that permeated pop culture at the time.

Demna chose Harmony Korine to direct the show, titled The Lost Tape, to capture the gritty nature of the Nineties. Models strode down the runway – similar in setting to the illegal underground raves that were once staged in abandoned factories – in post-grunge silhouettes, with Balenciaga signature codes rendered modern for a repossession of the overlooked era.

Hair and makeup followed suit, with cyber goth black lipstick and Sharpie-style eyeliner haphazardly scrawled across the lids in a manner that characterised the era – simultaneously enthusiastic and yet entirely non-committal. The hair was slicked back or left loose, with a notable lack of adornment speaking to the ‘too cool to care’ air that marked such a quietly hedonistic period.

Black was the unifying current that ran through the collection, with deconstructed vintage slip dresses, mesh detailing, and five-pocket jeans cut up to create a three-piece silhouette, allowing the wearer to switch between a miniskirt, pants, or XL thigh-high boots.

The show also further solidified Balenciaga’s commitment to responsible production, with 89.6 per cent certified sustainable plain and printed ready-to-wear fabrics as well as pieces of upcycled leather used in garments and accessories. 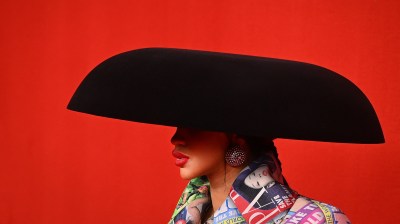 Cardi B, Elliot Page, Noami Campbell – And The Cast Of The Simpsons – Made Up The Balenciaga Runway In Paris
Next page