And 13 other burning questions you need her to answer Audrina Patridge: “The Hills made me look desperate and always wanting Justin.” Read her play-by-play of what went down with Justin Bobby here.

For 15 minutes of our interview, Audrina Patridge and I chatted about her on-again-on-off-again-but-were-they-ever-really-on relationship with Justin Bobby on The Hills. It was almost like being teleported to the lounge inside the apartment that she shared with friend Lauren Conrad on West 6th Street, Los Angeles in 2006. Patridge – honest, intelligent and well-educated in understanding my Australian accent – happily chatted about the highs and big time lows of dating a guy who just didn’t want the label. “Every girl has that one guy…”, I said. “I know,” Patridge replied. “I was so trusting of him all the time and always hopeful.”

But, there’s more to Patridge than just her supposed obsession with JB. Take a look here…

What would you say if your daughter came home one day and said, “Mum, a producer has approached me by the pool to be in a reality show”?

Patridge: “Oh my god. Well, knowing what I know now, there would be a lot of questions. For me, ten years ago, there weren’t that many reality TV shows out there like The Hills. So we didn’t really know what to base it on or how it would be. Nowadays, we have so many examples.”

Do you look back with fond memories or do you cringe when you hear the theme song?

“Growing up on TV was tough. I don’t look back with bad blood or anything but there were a lot of blurred lines between what was real and what was fake. At the same time, it was such a huge part of my life. Learning who I was and what I wanted and making mistakes was all captured on camera.”

You were in the public eye in the mid 2000s which wasn’t a very kind time to fashion. Do you have any fashion regrets?

“Gosh, looking back now I just laugh at some of the ‘stylish and cool’ things I wore. Like, they were so ugly, what was I thinking? Some of the dresses I wore on the red carpet and how thin my eyebrows were… it’s like, ‘What?’” In 2007, we saw you go to Awards shows in tube tops and jeans and then by 2014, you really came into your own on the red carpet. Were designers begging to dress you and did you have your own stylist?

“In the beginning, we kind of dressed ourselves and did whatever. We didn’t know what we were getting ourselves into. Now, hair and makeup is available to anyone and there are stylists and personal shoppers available at store. Anyone can look like someone does on TV. But back then, we had to do it all ourselves. Over time, the bigger our names got and the bigger the paparazzi coverage got, people were more and more interested and designers wanted to be a part of that. I did let designers dress me. Some were totally me and some were not me at all but I wore them anyways.”

Did you have to do your own hair and makeup?

“Yes. I guess what party what made it reality was that we didn’t have hair and makeup and a stylist on set all the time. We had to do it ourselves.”

You seemed like the type of girl who didn’t like the girl drama but you were always dragged into it. When you moved in with Lauren and Lo, was there real-life tension there?

“In high-school, was the type of girl who ever had bad blood with anyone, nothing. I was pretty easy going. I was friends with everyone. When I got on The Hills, that was a whole other story. I was like, ‘This is what you’re meant to go through during high-school, not after it.’ So I kind of got sucked into the drama and the cattiness of girls and I wasn’t used to it I always stayed away from that and took myself out of those scenarios but filming The Hills, [the producers] wanted it.

“So when I moved in with Lauren and Lo, I think they had a few other girlfriends and I think there was too much oestrogen around and too much cattiness and jealousy and insecurity and everyone was so nosey. I didn’t like it. So I kind of steered away from it.”

What was the most fabricated truth about you?

“Towards the end, it was pretty hard because the producers still wanted me to be in love with Justin and they still wanted me to act like I still wanted him and fight with Kristen. At that point, I was already dating someone else in real life, so on camera, it was ruining my real life reputation and my work. That was kind of the boundary line so I had to have a talk with the producers and say no. It was definitely looking like I was always desperate and wanted Justin all the time and that was probably one of the hardest things for me because it wasn’t like that.”

What happened to Chiara on the show?

“I haven’t talked to her in a while. I think she continued working at Epic Records for a while. She’s still in the music industry I believe but I’m not sure. After the show and the finale and everything, we kind of faded away from each other.”

Your teeth were always so perfect. There was a scene where you were packing up from Lauren’s and there was a box with about four Crest toothpastes. Was that your secret to having the best smile on the show?

“I have really big teeth but I’ve always taken care of them. I go to the dentist every four to six months for cleaning and I use extra whitening toothpaste. I was never the one to get into those teeth whitening products until recently. There are so many new organic ones. But my teeth are really sensitive so I have to be really careful with what I use and how much of it I use.”

You’ve said in the past that the producers wanted you to be a brunette but as the seasons progressed, we saw you getting blonder. Did they finally give in?

“No, they didn’t really have a choice. Growing up, I was always dirty blonde naturally. When I turned 18, I was like, ‘I want dark hair!’ and I dyed it so I could move to LA because everyone is blonde so it was kind of nice having dark hair. It made my eyes stand out more because I have lighter eyes. But after four or five years, I was like, ‘I want to change my hair now’ but the producers didn’t want me to because I was the only brunette on the show. So I just started doing it gradually and getting highlights every few months and balayage and ombre. Eventually, it would fit into the scene but I would have to do it subtly.”

Do you still catch up with Lauren?

What was it like getting ready to go out together?

“It was a lot of fun. It’s always better getting ready together with your girlfriends. You can help each other out with your hair and choosing outfits and you know, you have a drink while you’re getting ready to go out and listen to music. It’s a part of the whole girl thing, you know? You get ready together, go out, dance and go home together. It’s fun.”

What other projects do you have in the works?

“Right now I’m focusing on the baby. I have a couple of projects in the works and then we’re planning the wedding for the end of the year. Corey and I are actually in the middle of moving right now. I’ve been working on a swim line for the past two years so we’ll be getting ready to launch that in a couple of months too! It’s been a passion project for me for a while in between filming the travel show. Now, I’m just taking it easy and enjoying life, really.”

What are you most excited about when you get to meet your daughter?

“I’m so excited to meet her, Corey is too. I feel like I already know her because I can feel her move. I want to know what she looks like and know more of her personality. I’m just so excited.” Audrina Patridge: “The Hills made me look desperate and always wanting Justin.” Read her play-by-play of what went down with Justin Bobby here. 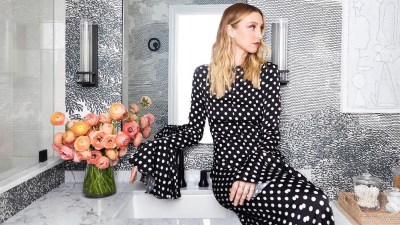 Our Hearts Are Breaking For Whitney Port 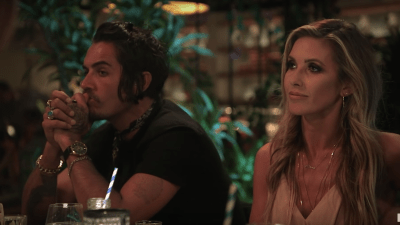