Master of his own universe 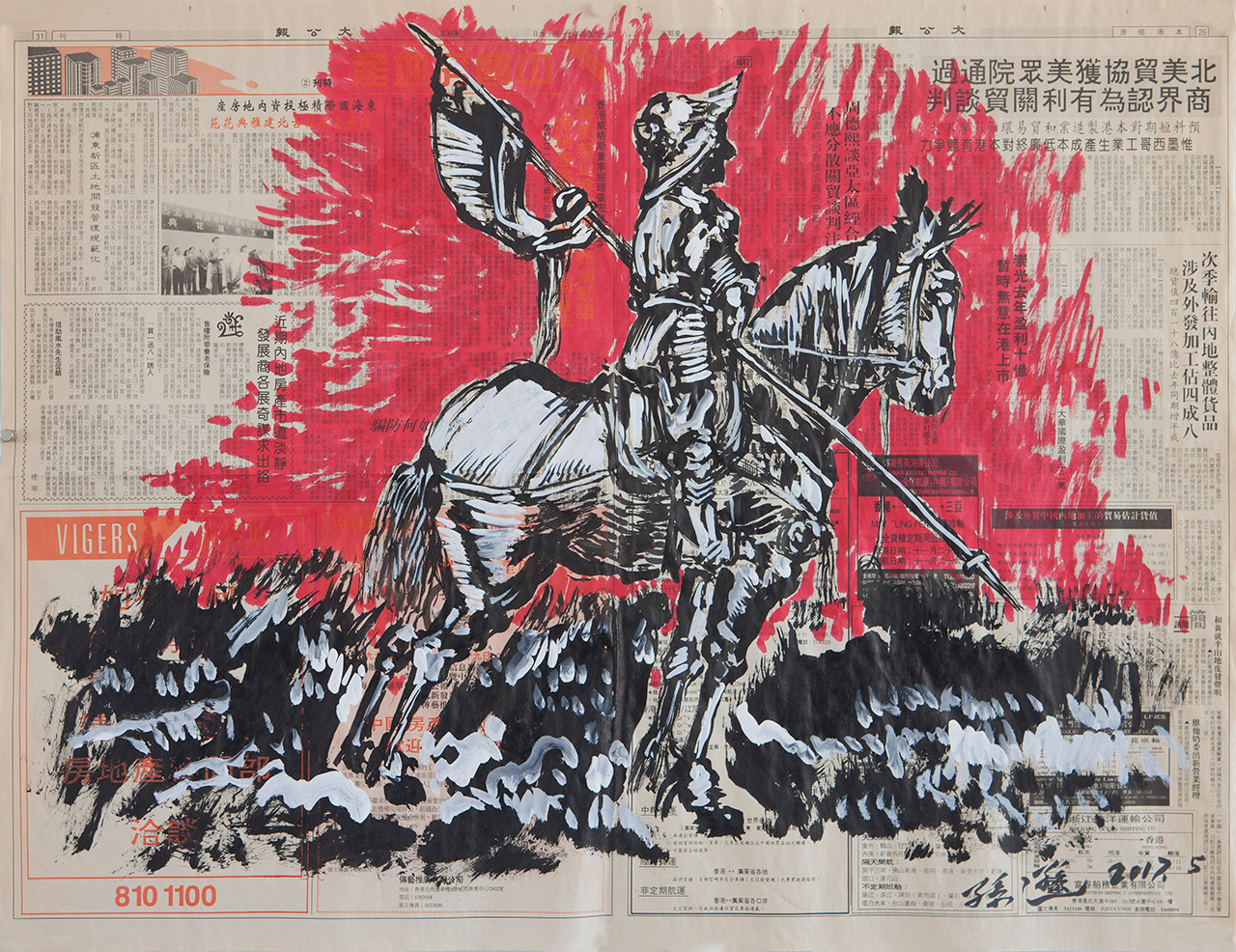 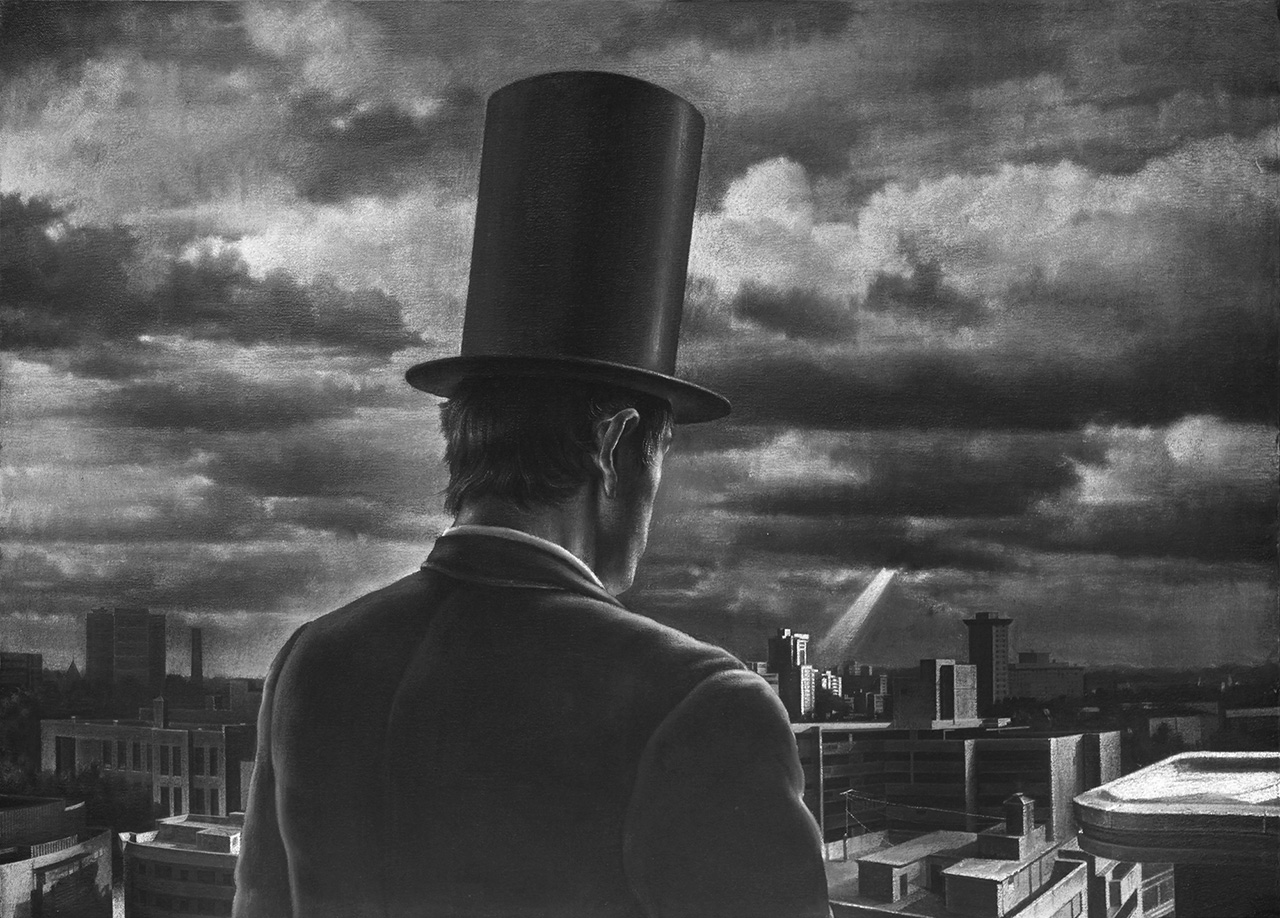 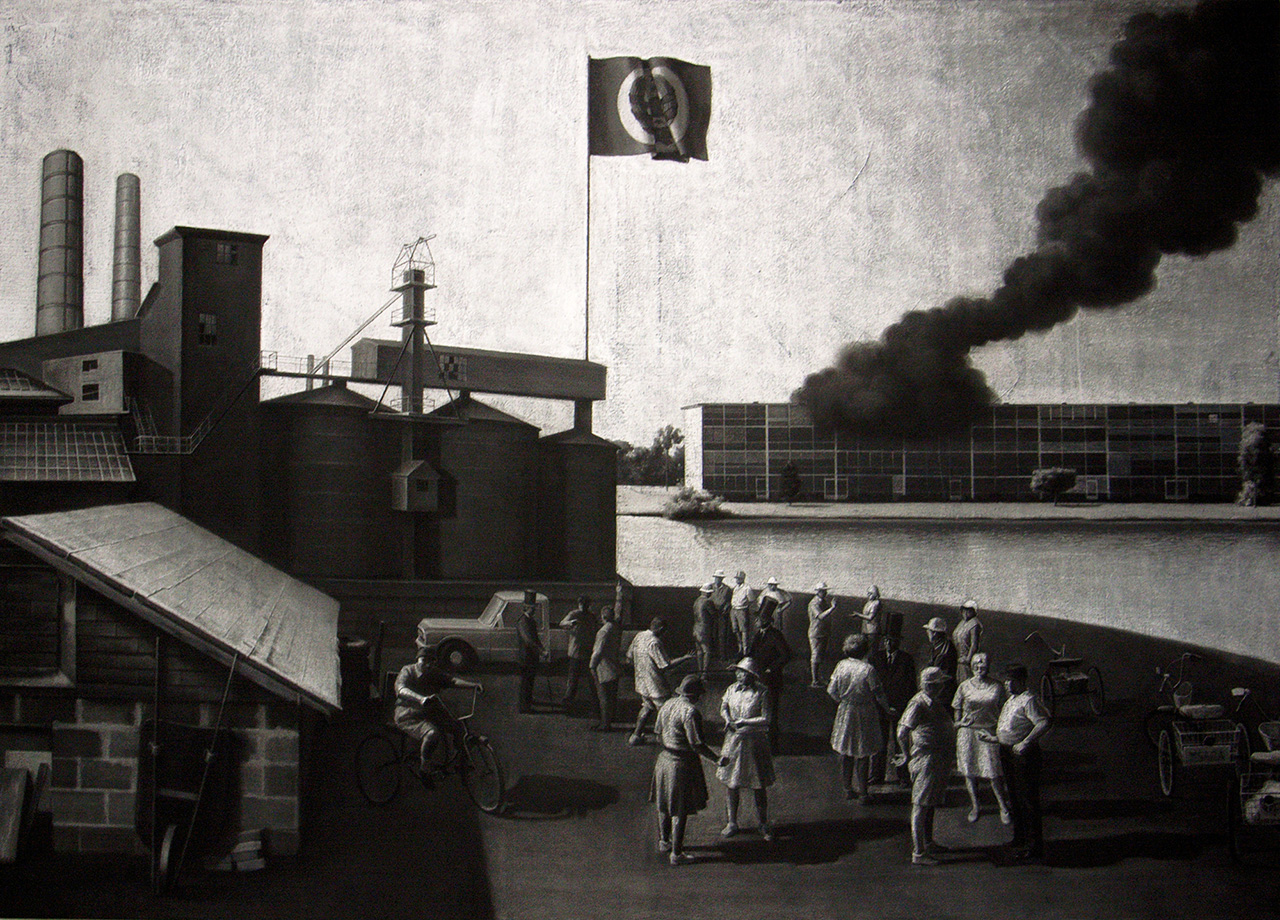 Though his sneakers – their shoelaces removed – are white and beige, Sun Xun appears unfazed. The artist has just begun painting the horse-shoe shaped barnacles that cluster on a gnarled two-pronged branch of his own design when black ink begins to pool at his feet. He doesn’t seem to mind, however. Least evident amongst his concerns is a sense of order, or a strict adherence to borders of any kind. More than half of the tree’s trunk has already been loosely sketched out on the exposed wall beneath the work in progress. Metres to his right on the same gargantuan piece of parchment that a friend custom made for Sun in Beijing, the as-yet untitled work explodes into an inky riot of planet-straddling insects and crashing waves that smear themselves on the pristine gallery walls. A sign nearby asks that the crowd, which has grown large enough to encircle the artist, not disturb the peace while he works. Through the silence, two onlookers remark that Sun’s work, which is still very much in its beginning stages, resembles the work of John Olsen. In the firmament of great artists, however, the two are worlds apart.

“I didn’t hear [anyone], I was [focussed on] the painting,” Sun says later, stepping into the concourse outside Sydney’s Museum of Contemporary Art once he has expended his reserve of ink. “Even when my friends called me, I [wouldn’t] know. I just work.”

Orbiting around Sun Xun is a small entourage offering cigarettes and bottled water. Sitting nearby is a friend who has travelled from Sweden to be with him for the opening and who had intended to only stay for three days but was convinced by Sun to stay longer, so that they could “enjoy some oysters and wine.” Another is his six-year-old son, Benson, who at one point in our conversation climbs aboard his father wearing a cherry red puffer jacket. Then there’s the rest of his team, one large enough as to be commensurate with the ambition of the body of work that has brought him here.

Sun, 38, is in the second day of a three-week live painting residency that coincided with the opening of the Chinese artist’s first major solo exhibition in Australia, and he has no idea where the work at hand will take him. That is because Sun Xun does not paint from any preconceived design or idea. Instead, when the creative wellspring runs dry, the artist steps outside into the cacophony of Circular Quay and looks at the splendour of the world around him. At the ibises, at whose scrounging and bravery he marvels. At the brilliant natural landscape, which he says looks like no other in the world. Asked how he will know when the work is complete – besides the obvious fact that he has a return flight booked – and Sun murmurs. “I don’t know”, he says. “You’ll [know] you’re almost finished and go to check something and suddenly – okay. It’s a feeling. It’s like you get full.”

Sun has visited Australia several times before, for preliminary site visits and for the exhibition of his work at White Rabbit, but never has he done something like this. Included amongst the many staggering works in his namesake show are a number of the artist’s signature woodcut animation works from the past 10 years, very little in which adheres to strict narrative structures or employs much dialogue, but all of which are incredibly labour intensive. Included amongst those is 21 Grams, which screened at the Venice Film Festival and accorded Sun, who has often been lauded as one of China’s most dynamic contemporary artists, the honour of being the first Chinese artist to screen at the festival. Then there is Time Spy, a 10-minute, non-linear 3D stop-animation that ruminates on time, cosmology and the personal experience through a surrealist lens. Time Spy employs a cast of hybridised characters and landscapes that conflate the human with the animal, the organic with the artificial, and the terrestrial with the cosmic. To create the frames of his animation, Sun Xun used a process that pushed his practice to its limits and which required that he first illustrate each frame as a drawing. He then applied an ink wash that effectively rendered these drawings as painted works. Those images were then turned into nearly 10,000 hand-cut woodblock prints carved into relief with the assistance of over 100 assistants before those prints were filmed at a rate of 18 frames per second.

Using the coordinates of time and space, Sun expresses an interest in both history (not strictly human history) and politics, as well as a desire to conceive of a worldview that is at once personal and universal. Ordinarily, the artist directs a studio of 10, but during demanding periods, he will enlist local university students to help with more large-scale projects. In November last year, the studio began work on a feature-length film about a son trying to find his father against a background of political intrigue, inspired by geopolitical instability. It takes, as a larger theme, “a worldview, how to rule the world”.

Outside one of the exhibition screening rooms is a quote from the artist. “Your hometown is like a diary,” writes the artist. “It’s the starting point of your values.” Sun grew up in Fuxin, in the north-eastern Chinese province of Liaoning, where, he says, “I stayed in the totally wild world [around] donkey, sheep and ducks,” before moving to Hangzhou, in the country’s south at 14-years-old. The culture shock was profound, and it galvanised an art practice that seeks to interrogate that break between worlds even further. In 2009, he made the move to Beijing, the city where he lives for three months of the year when travel commitments abate. “When I was based in Beijing, I travelled more and more [which] is also really important to me,” says Sun. “I learned a lot from that.”

Sun Xun is prolific, reluctant to be pinned down to any one style or by the terms that are often applied to him by virtue of his geographic borders (specifically, “a Chinese artist”) with all the attendant meanings the term entails. Works exhibited at the MCA show include the works Sun sketches in ink on the free newspapers handed out in airports around the globe; then, conversely, there is an ornate Japanese screen that is at once beautiful and imbued with a sense of humour, its scenery doubling as a knowing wink to the conflation of styles and references at play. All of his works are cryptic, layered with references and clues that invite dissection but refuse easy explanation, and each is an expression of a world of Sun’s making. “He’s not actually interested in spelling out the meaning of the work to anyone,” says the MCA’s exhibition curator, Anna Davis, who began devising the show with Sun some three and a half years ago. “He’s much more interested in the questions it might provoke you to ask.”

“I don’t think animation is quite [so] important for me”, says Sun, who, Davis later explains, learned from an early age to copy the great masters of both Chinese and Western work by rote, meaning that he’s as much fluent in every imaginable style as he is motivated to not be defined by a single one. “I did everything,” says the artist. “Contemporary art really is a free language, [more] than any others’ language. Nothing [else] is important. Just take care of your spirit and you can do everything. You have the possibility to understand everything.”

Separate from the bulk of the exhibition is one of Sun’s most astonishing works. A 40-metre long piece of handmade, mulberry bark paper made in Beijing using phosphorescent pigments that is as deserving of its own gallery as it sounds. At almost four metres in height and shown under ultraviolet light, it glows as much thanks to the elements of its composition as its content: an imagined universe that posits that there is an extraordinary world of wildlife existing beyond reach at the heart of this continent. As a single piece of parchment with no joins, it’s an incredible feat, one that beggars the kind of questions that his live painting did – chiefly, where does one begin?

“When you face the empty paper, what can you draw?” asks Sun, who is prone to speaking quixotically and circuitously about fundamental philosophical questions, chuckling all the while. “There are so many choices – how to start? And what about tomorrow’s dinner? You never know. So that’s life. That’s choice. We make schedules, always, but they aren’t useful. Just follow the natural situations – my painting is the same. You never know what you want to eat tomorrow night, so the most important thing is [freedom] – don’t make another prison for yourself. Don’t make your mind a prison, your body is a prison enough. The mind should be free.”

Sun Xun is exhibiting at the Museum of Contemporary Art, Sydney, until October 14. Entry is free. More information is available here