‘The you beaut’ country trips the light fantastic, and it’s necessary viewing this weekend The artist John Olsen pictured at a preview of his stunning career monograph, The You Beaut Country
Credit: Shot on iPhone

John Olsen is talking to his paintings at a preview of a major career retrospective, John Olsen: the you beaut country, and he’s so radiant that you can almost hear the paintings talking back to him.

In a natty beret and pocket square and aided by a cane, the artist, now 89-years-old, never stops beaming as he tours gallery after gallery teaming with his spectacular studies of the Australian landscape and life, with all its attendant pleasures. His joy is infectious, his cackle is positively wicked. As he walks through the most comprehensive career monograph of his work ever compiled, beginning with his earliest attempts at emulating Cezanne-style still lifes as a student in Spain and concluding with two stunning harbour scenes painted last year, he emanates the very light he has spent his lifetime capturing in vivid detail on board, in tapestries, through ceramics and on canvas.

One major work, Sydney sun (or King Sun) pictured above, typifies this sun-drenched feeling, and he slips into a reverie so wondrous that it’s impossible not to join in.

“[Sydney sun was] commissioned as a ceiling for a dining room. There was a glass table and it hung over the glass table like a mirror. Fabulous. Absolutely fabulous. It was so full of the sun, like Sydney is: the harbour, the beaches. It’s optimism. The painting is an attempt to radiate that particular feeling of Sydney. I’m a Sydney kid. I’m from Bondi, Kings Cross, Paddington. I hope the painting assures that feeling, and if it does, thank you.”

Still practicing today, Olsen is undoubtedly one of Australia’s greatest living artists and The you beaut country is testament to as much. It’s the artist’s attempt, he says, to realise the Australian visual vernacular and its colloquialisms in equally as stunning forms. “The Australian landscape is not symmetrical,” he observes. “Once you come to appreciate that untidiness, it becomes very beautiful in itself and unique. It’s that kind of things that I was endeavouring to do.” Included amongst the exhibition is the landscape series from which it takes its name, one which Olsen began in 1960. It also includes his Archibald Prize-winning self-portraits, Self portrait: Janus faced, and Donde voy? Self-portraits in moments of doubt, amongst other works that explore a darker palette – something of a lesser seen side of his oeuvre.

“[They] happened at a crucial time in my life. I don’t know how I did it,” Olsen recalls of those darker works, including Donde voy, whose title translates from the Spanish for ‘Where am I going?’. “It somehow worked out that way,” he continues. “There was a kind of strange thing that moved my hand in that direction. I’m paddling around in the land of Goya or Rembrandt.”

The you beaut country premiered at the National Gallery of Victoria in September last year, and will exhibit at the Art Gallery of New South Wales until June this year. Olsen will also exhibit new paintings at an exhibition opening at his son Tim’s gallery next week.  But to hear him tell it, he’ll be exhibiting for years to come.

“I am never bored,” he says, the preview drawing to a close. “My body’s a ruin but I’m a child. I love it. I love painting. It’s so good. It’s so immediate. They can say what they like about panting being dead. The most immediate thing is a brush mark which says ‘I am.’ That simple action, that kaleidoscope, is why painting will always be primary.”

John Olsen: the you beaut country opens today at the Art Gallery of NSW and will be on view until Sunday June 12, 2017. You can find out more information here.

topics: ONE AND ONLY, John Olsen, CULTURE NEWS, The You Beaut Country, AGNSW, ART GALLERY OF NEW SOUTH WALES 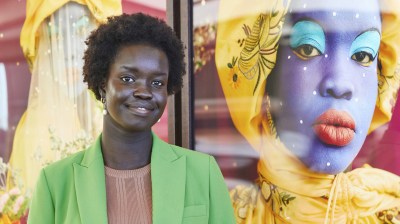 Atong Atem: A Woman As Bright As Her La Prairie Award-Winning Masterpiece