Anna Wintour In Sweatpants? Now This Is Groundbreaking

After announcing she would never, ever wear sweatpants, it seems even fashion heroes fall

The late, great Karl Lagerfeld once famously declared: “Sweatpants are a sign of defeat. You lost control of your life so you bought some sweatpants.” Anna Wintour – a legend cut from the same stuff – has long shared the sentiments of Lagerfeld, the impeccably presented, glamour-wielding editor-in-chief announcing last year that she never, ever wears the relaxed athletic pant.

But it seems even heroes fall in the name of quarantine comfort.

Announcing a new Vogue US initiative on Instagram, Wintour appeared in a video (a seemingly consensual one) wearing none other than sweatpants. A moment that has left fans of fashion to collectively pick up their jaw from the floor, Wintour wore a pair of lipstick red track pants with white stripe up the leg, along with a Breton stripe knit in deeper hue of red. Of course, it wasn’t all dressed-down normcore for the queen of fashion, those famous black sunnies made an appearance (remember she has a personal brand to uphold after all, and this single item is the backbone of the mythology she’s orchestrated).

But the sweatpants were particularly jarring in the fashion narrative of Anna Wintour. Fans were so aghast in the comments section, one keen observer concluded, “Omg Anna Wintour in joggers. The world IS changing.” Indeed. A sign of “defeat” for the most powerful person in fashion, or perhaps a glimpse at the new unceremoniously casual Anna Wintour (or canny marketing ploy) – either way, Anna in sweats is a sight to behold.

One can only wonder if Karl Lagerfeld – allergic to bad taste and track pants – would too have bitten the bullet in this time of quarantine and swanned around his Parisian apartment, Choupette by his side, in a pair of Adidas Firebirds. 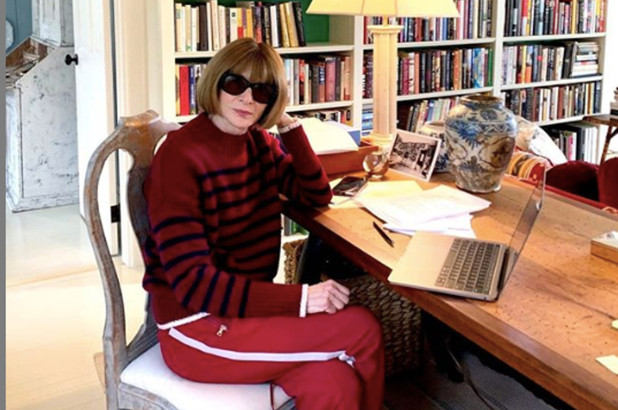