In the 3D printed ceramics of Alterfact, ornament is more than fine. In fact, it’s fantastic

The 3D printed ceramics of design duo Alterfact reject the defining maxim of modernism, flout trends and embrace the aesthetic possibilities of ornamentation 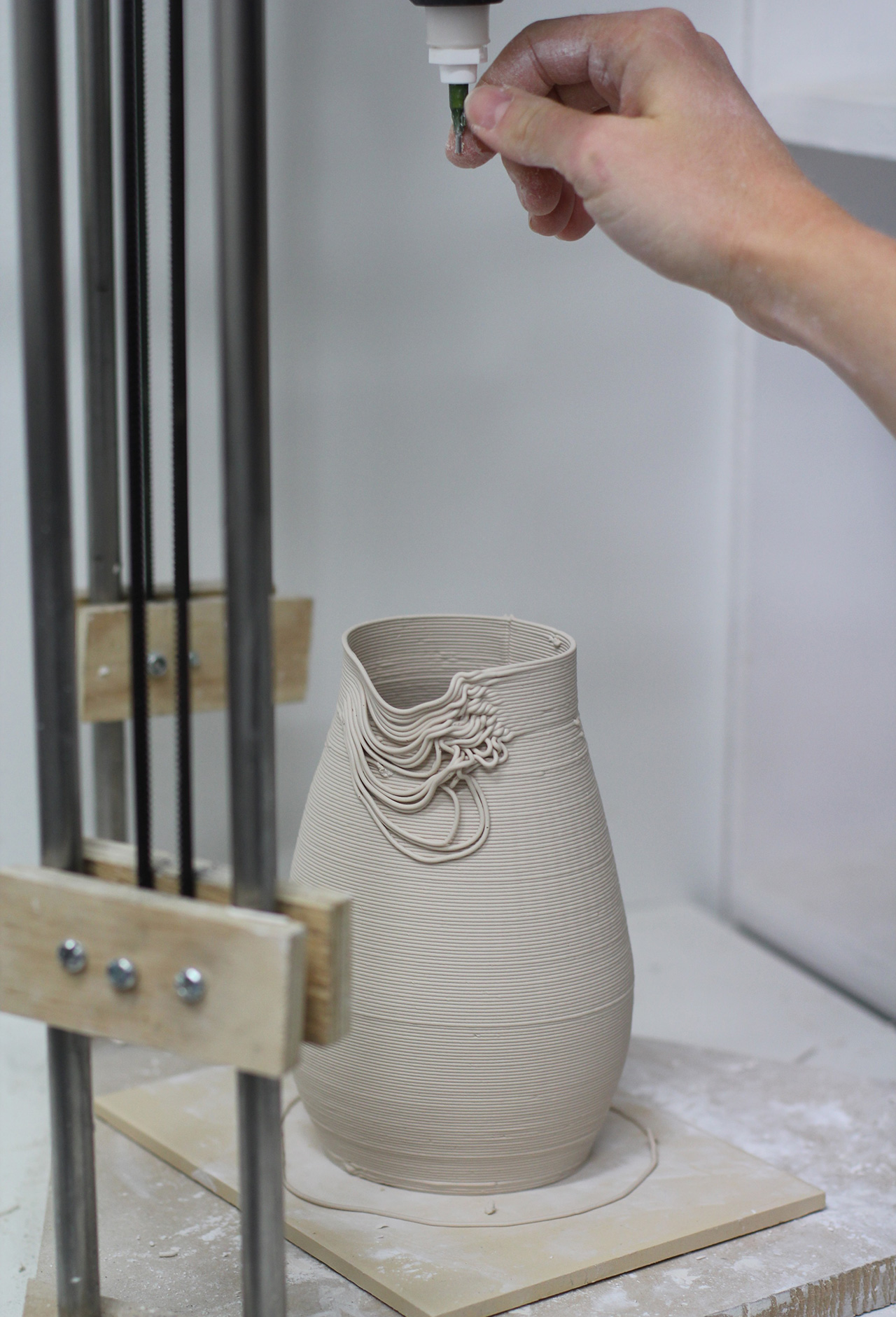 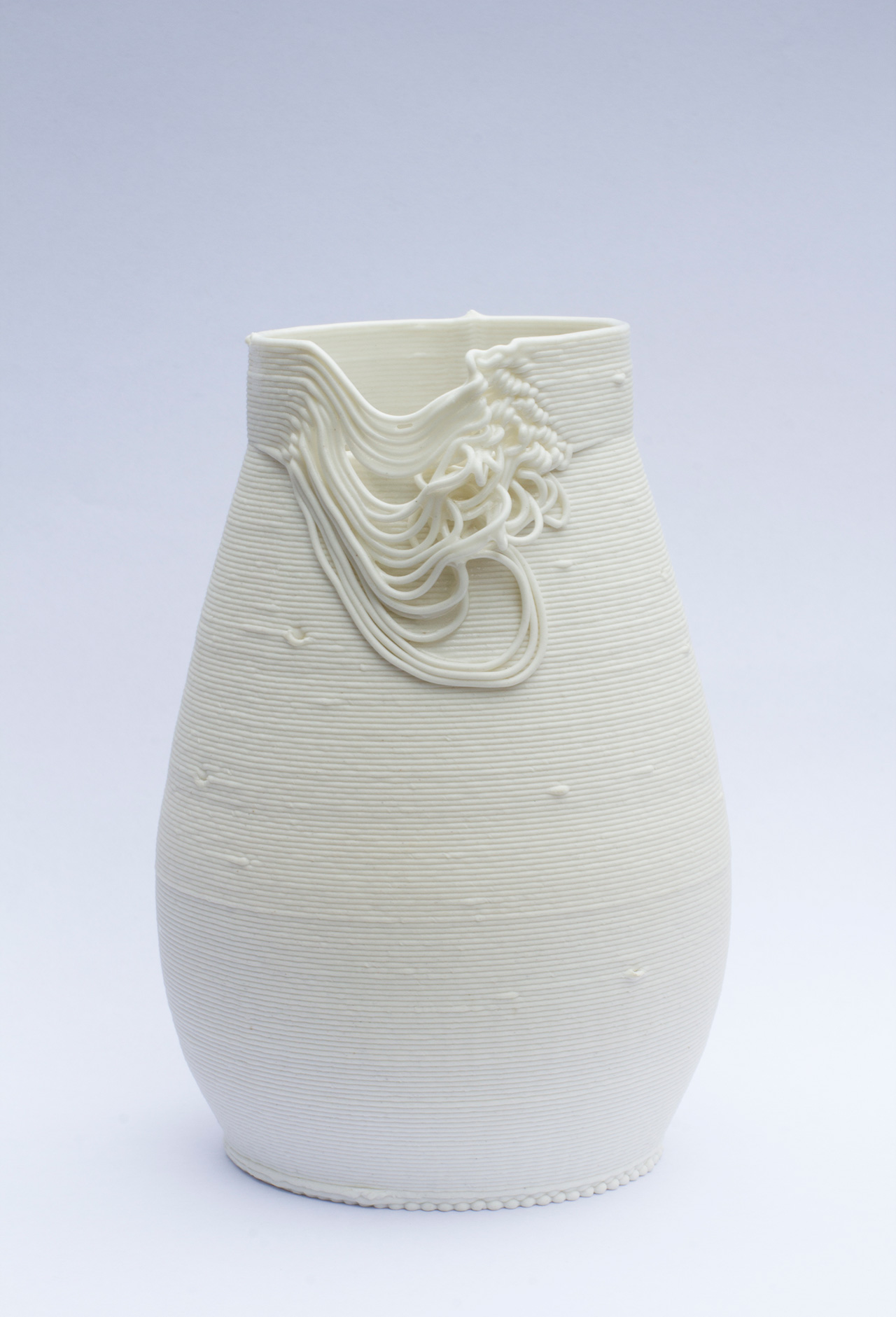 The title 'Ornament is fine' refers to the seminal 1913 essay 'Ornament and Crime' written by the modernist architect Adolf Loos, who equated excessive detail in design with accelerated obsolescence

At an early stage in the manufacturing process of Melbourne-based ceramics studio Alterfact, a spoonful of intensely coloured raw pigment is combined with clay using a benchtop Kenwood Mixmaster. It’s a familiar image born anew, one that’s ordinarily associated with scenes of domestic bliss: fluorescent powder resembling food dye whirling through viscous mounds of clay like cake batter. Baked goods are as apt a comparison as any when it comes to imagining the work of Alterfact, much of which is uncanny in its resemblance to elaborately piped cakes, the frosting on which appears to have run amok with a mind of its own.

“A lot of people on Instagram say, ‘Oh, it looks delicious. Can you make my birthday cake?’” Ben Landau, one half of Alterfact, told GRAZIA. “We probably should do something with food, because so many people mention it.”

Alterfact create 3D printed ceramic works that are both decorative and food safe. Their more utilitarian design objects are surprisingly resilient, despite the frailty implicit in their medium and making. Their more ornate designs, however, are far from dishwasher safe. Many of Alterfact’s elaborately knitted ceramics defy belief, convention and, seemingly, gravity itself.

Alterfact is the collaborative moniker belonging to Ben Landau and Lucille Sciallano. The duo met whilst studying at Design Academy Eindhoven in the Netherlands in 2011. Three years later, they relocated to Melbourne and established their studio. Together, they built their first ceramic 3D printer from design and using parts sourced from the Internet. They’ve since made a second printer; a third, much larger in size and completed recently, will give them the capability to print much larger ceramics than those they’re currently producing in batch for both retail and exhibiting capacities.

Despite the hands-off approach implied by work created using relatively new technologies, there remains a palpable DIY ethos to Alterfact’s design and manufacturing processes. In its most rudimentary form, the process of 3D printing ceramics could perhaps be described thusly: Alterfact’s designs are made using a Computer Aided Design [CAD] program to create a model for the final physical form. A second program, called a ‘slicer’, converts that rendering of a three-dimensional shape into a series of G-Code coordinates (the kind understood by all 3D printers), which are then interpreted as precise movements by the machine itself. A tube affixed with tiny, interchangeable nozzles of varying shapes (according to their desired design) is then filled with clay; a second tube filled with compressed air is attached to the clay apparatus and, when in operation, it extrudes the clay in a hypnotic sequence of fluid movements. Laundau likens the consistency of the clay when wet to that of toothpaste. It’s the perfect description.

“We’re using this machine to make these very detailed [pieces using] a method which is half mechanical and half handmade,” says Landau. “We like to sit between those two [worlds]. This method of manufacturing opens up new possibilities for ornamental elements which would not be possible with other techniques.”

At a time when ceramicists, and by extension the global homewares conglomerates who follow in their wake, seem intent on meditating on the beauty of imperfection and invoking the Zen Buddhist philosophy of wabi-sabi in their pursuit of an irregular and authentic beauty, there is something entirely disarming about the work of Alterfact. There is a contemporaneity to their work that bridges the divide between functional object and art work. In its diversion from the almost fetishized obsession with what’s painfully handmade, or at least appears to be, there’s a refreshing and timely appeal to these creations wrought from both hand and machine in tandem – the finished piece straddling many worlds at once.

The British artist Jonathan Keep is credited with developing and open sourcing the technology to create ceramic 3D Delta Printers as recently as 2010. Landau describes digital manipulation as being the fourth way of producing ceramics, the first three techniques being hand-building, wheel-throwing and slip-casting.

Landau credits the British artist Jonathan Keep with pioneering the 3D Delta Printer technology in 2010, calls it the fourth way of producing ceramics. The first is hand building, wheel throwing, slip casting and this is digital manipulation or production. In addition to time saved in comparison with both plastic 3D printing and other ceramics techniques, “one of the most economical things about ceramic 3D printing is that it can be changed multiple times,” says Landau. “Whereas in slip casting, you’d have to make a whole new mould… It’s not the best mass production technique, but for many small things it’s possible.”

There is an openness to the work, in both the use of an open sourced design and the moment of making using the printer, that allows Landau and Sciallano to intervene at will. “This is more intuitive,” says Landau. “There are a few things we can change while we’re printing,” unlike other 3D printers which require total autonomy from their operators once the printing process begins. After their designs are printed, they must still adhere to the conventions of ceramics. The works must be bisque fired, glazed, and subjected to a second stoneware firing in a gas kiln. “We’re purists in that we’re not… trying to add too much to [the clay].”

Laundau estimates that there are perhaps 40 others around the world using the open source technology to create similar 3D printed ceramics. “It’s not a very competitive scene, it’s quite collegiate.” A community exists on Google+ where other practitioners troubleshoot problems and share advice. Where the practices of others err on the line of sculpture, Landau and Sciallano create “objects that are along the line of useful [and] critical objects that push the boundaries of use by interrogating ornament.”

In the work of Landau and Sciallano, mistakes resulting from the manufacturing process are not ironed out but embraced, captured and reused in order to make something unique. The addition of robotics and algorithms has not entirely obliterated an element of chance and the artist’s hand from the creative process. The shapes they trade in – radial forms, for example – are informed through trial and error with the printing process. One of the restrictions with the printer is that it never stops extruding. “Learning the process of what the printer can do enables us to make new shapes,” says Landau. “Because we’re trying to do something quite difficult with clay, which is extrude it through a tiny nozzle. Because clay is an organic material that is not necessarily consistent, there is that clash between something which is predictable and that which is a bit crazy, and that’s what we like to bring out as well as well as pushing it to the limits of what is possible.”

A desire to push the boundaries of their medium is evident in a new body of work exhibiting now as part of Melbourne Design Week. Ornament is fine, on show at NGV Australia in Federation Square, sees Alterfact present an exhaustive collection of objects that vary from miniature objects that serve a purely decorative function to large scale vessels that flout the rules of their chosen medium.

The title of the exhibition relates to the modernist architect Adolf Loos’ seminal 1913 essay, Ornament and Crime, who equated a preponderance of ornamentation in design with its accelerated obsolescence. The exhibition takes its cues as much from the graphic open plan blocking of Lars von Trier’s theatrical film Dogville as from three scenes exemplary of a domestic setting: a bathroom, kitchen and lounge scene. The design is as much a way of embedding narrative into the display as it is a reckoning with how Alterfact’s objects can be allowed to play within a home. There’s also, admittedly, a fair bit of artistic license at play in the exhibition of design fixtures whose intended utility is incompatible with the medium: electrical sockets, handles, taps and bookshelves, for example. The setting also invokes and critiques the notion that in the future, domestic 3D printers will join the litany of other mod cons whose function is to ameliorate the inconvenience of, well, living.

Part of the pleasure of experiencing Ornament is fine is also to be found in watching others pass through the exhibition and try to decipher what it is exactly that they’re seeing – the natural instinct being to reach out and touch. In a way, it’s telling that Alterfact prefer to leave a tell-tale trace of the making in their works, unlike many of their contemporaries who prefer to cover their work in glazes that mask the tactile lines of the printing process. Instead, they prefer to glaze the interior cavity, leaving the undulating surface unvarnished to allow their story to come through. Those lines are, effectively, their maker’s mark.

During my conversation with Landau, a man approached and interjected, sending that the designer was implicit somehow in the works before us. He had dabbled in ceramics, he said, but couldn’t quite comprehend the world of difference that lay between his rudimentary pinch pots and the vessels at hand. All he desired was for someone else to fill in the gaps.

“They’d be virtually impossible to make by hand,” he offered Landau, who agreed, nodding. “I would probably just end up making a sausage.”

Doesn’t that just take the cake?

Ornament is fine is exhibiting at NGV Australia in Federation Square until March 25 as part of Melbourne Design Week. More information is available here.

Tile and cover image: Courtesy of the artists/Melbourne Design Week and the National Gallery of Victoria