Filmmakers have a well-documented thing for stylizing the apocalypse. There’s the moody chiaroscuro of Alfonso Cuarón’s Children of Men; the gritty British rawness of Danny Boyle’s 28 Days Later; the kitschy schlock of an eyepatched Kurt Russell in John Carpenter’s Escape From L.A. Now we have another to add to the genre: the muted elegance of Jonathan Glazer, found in First Light, a five-minute short film unveiling Alexander McQueen’s spring summer ’21 collection.

McQueen’s creative director Sarah Burton was among a handful of designers who chose not to show during the traditional Paris Fashion Week schedule in September, instead tapping Glazer—the celebrated auteur behind eerie cult classics like Under The Skin and Birth—to debut her latest collection cinematically. With both the clothing and the film Burton wanted to create an ode to London—her hometown and the birthplace of McQueen—during an unprecedented moment in the city’s history. In First Light models dressed in Burton’s unparalleled tailoring paw about the long-abandoned British capital. Trench-wearing models neck underneath a bridge; mod-looking boys roam around in gangs; girls in gowns and six-inch heels grinningly wave at each other from across the Thames.

Of course, it didn’t take an apocalypse for London to become unsettlingly quiet—although at certain times this year it has felt that way. Among the many Black Mirror-esque images that will come to define 2020, the abandoned, empty roads of Oxford Circus and Covent Garden were among the most jarring. In bustling cities like London and New York the irony of being in a city heaving with people and yet completely isolated, devoid of all physical contact, has been particularly difficult. In notes on the collection, Burton said she wanted to counteract that longing—these are clothes made for “a world charged with emotion and human connection.”

Which brings us to the clothes. Part of Burton’s genius is her ability to update well-treaded house silhouettes each season with the end result remaining remarkably fresh. Burton said she wanted spring-summer ’21 to celebrate “the beauty of the barebones of clothing, stripped back to its essence”, and we saw this on two levels. Not only were the pieces themselves stripped back (physically deconstructed then re-stitched together), but they formed a kind ‘who’s who’ of McQueen’s most celebrated staples.

There were double-breasted coats with exploding voluminous sleeves; streamlined Prince of Wales check suits; trompe l’oeil jumpers and corseted evening gowns made with Chantilly lace. If they’re pieces you feel like you’ve seen before, that’s the point. Burton doesn’t cater to the fickle whims of seasonal trends, she stands resolute in her belief that exquisitely crafted garments will always have a captive audience. (Which, of course, they do—everyone from future monarchs to Hollywood starlets).

This was the first time Burton had showed womenswear and menswear together (pre-fall for men’s, spring summer for women’s), and the friction point between masculinity and femininity was an ongoing tension point throughout both collections. Hyper-feminine gowns were worn with chunky patent leather boots and cropped tuxedo-style jackets, biker jackets were given sculptural tulle sleeves—a particularly memorable androgynous deconstructed leather-and-denim suit was more ‘Lil Nas X’ than ‘Kate Middleton’.

In fact, frictions and dichotomies were evident in much of this collection: The tension between comfort and beauty (see: a model in a blush tulle gown luxuriating in the mud), between old and new (Burton used deadstock from the McQueen design studio to create many of the pieces), between restraint and extravagance. If anyone is up to mastering the balancing act it’s Sarah Burton—who is, perhaps, the only person capable of crafting a post-apocalyptic world that one might quite like to inhabit. Ballgown optional. 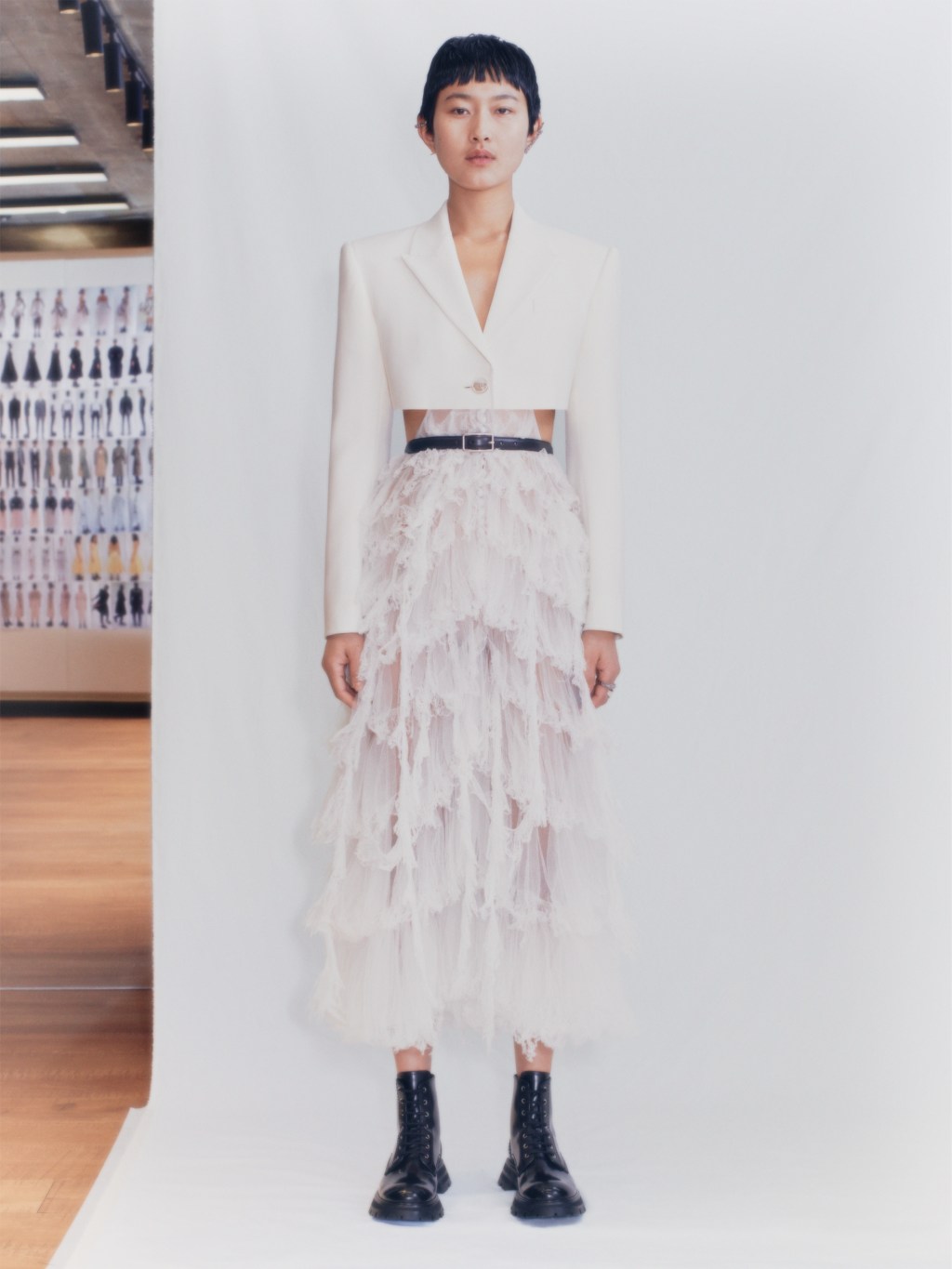